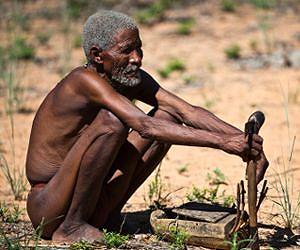 I guess we sort of knew this from inference, but now we know the precise time frames.  It is remarkable that we retain two human populations cut of from intermarriage at least from humanity in general for so long.  The San at 130,000 and the Australian Aboriginals are at around 60,000 years at least and may still be pushed back further.  I would also like to see the highland natives in checked out.

Many will surely speak of preserving such populations and that does have merit.  Yet they are also abandoning their lifeways, willingly or not. One can hardly blame them.  This will also inevitably lead to hybridization and the merging of any independent genetic characteristics into the general population as has mostly happened already with every other unique racial grouping.

The Cro-Magnon Neanderthal interaction began around 50,000 years ago and led to the emergence of modern humanity plausibly by 40,000 years ago which certainly fits into the time frames that I have been working with.

When I started writing my original manuscript, none of these time lines were particularly convincing.  Now it appears that the emergence of modern humanity has been placed pretty well around 200,000 years ago around coastal with sea adapted primates who learned to increase their social grouping to around 175 from the normal twenty or so.

Researchers use genome sequences to peer into early human history

The study shows that the San people - like the man shown here - split from other African populations about 130,000 years ago.

Cornell researchers have developed new statistical methods based on the complete genome sequences of people alive today to shed light on events at the dawn of human history.

They applied their methods to the genomes of individuals of East Asian, European, and western and southern African descent. They analyzed only six genomes, but made use of the fact that these genomes contain traces of genetic material from thousands of human ancestors, which have been assembled into new combinations over the millennia by genetic recombination.

The main finding of the study, published Sept. 18 in Nature Genetics, is that the San, an indigenous group of hunter gatherers from southern , diverged from other human populations earlier than previously thought - about 130,000 years ago. In comparison, the ancestors of modern Eurasian populations migrated from only about 50,000 years ago.

Previous studies of human demography have primarily relied on mitochondrial DNA from the maternal line or Y-chromosome data passed from fathers to their sons, but those studies are limited by small numbers of genomic positions. This study uses the full genome of each individual, providing a richer, more complete picture of human evolution, according to the researchers.

"The use of genome wide data gives you much more confidence that you are getting the right answer," said Adam Siepel, associate professor of biological statistics and computational biology, and senior author of the paper. "With mitochondrial DNA, you are only looking at one family tree [the maternal line], with one pathway from each individual to its ancestors. We are sampling from all possible pathways."

"What's unusual about our methods is that, not only do they use complete genome sequences, but they consider several populations at once," said Ilan Gronau, the paper's lead author and a postdoctoral associate in Siepel's lab. "This is the first paper to put all of these pieces together," he added.

Previous studies using mitochondrial DNA, Y chromosomes and other markers have estimated that anatomically, modern humans arose roughly 200,000 years ago in eastern or southern Africa; and that the indigenous hunting-and-gathering central and southern African San people - one of the most genetically divergent human populations - diverged from other Africans about 100,000 years ago.

To conduct the study, the researchers began with a statistical approach that was originally developed to infer divergence times for related but distinct species, such as the human, chimpanzee and gorilla. They faced a number of challenges in adapting these methods for use with human genome sequences. For example, the great ape genome method assumes that gene flow stops after two species diverge, because they can no longer mate. That is not true for distinct human populations, and without accounting for gene flow, the divergence times would have been underestimated, Siepel said.

Gronau used mathematical techniques to work around that problem and then created elaborate computer simulations to demonstrate that the new method worked within known parameters of human divergence.

The study was funded by the Packard Foundation, National Science Foundation and National Institutes of Health.