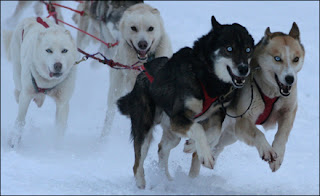 What we are looking for is a pill that allows you to switch on the equivalent of a sled dog’s metabolism which we must surely be able to do.  Recall our hunting ancestors actually ran for hours in the process of running down and exhausting game.

The payoff is that physical training regimes will change drastically. They will also become vastly more common.  Just that one can train to complete muscle exhaustion, eat, and go to sleep, and then wake up fully refreshed and able to repeat is huge.  The actual cost part of intensive exercise is under control allowing rapid and complete body conditioning to become practical for everyone.

If you ever wish to discover real pain, run full out the distance of a mile and one half in the morning.  Be sure you have exhausted yourself.  I am assuming you do some exercise and can do this safely, but otherwise no athlete.  Now in the early afternoon repeat the run at full out effort to better your times.  That should destroy you and make it almost impossible to do anything for about two weeks.  The promise here is to miss the two week agonizing recovery.

This work looks quite promising and should give us results quickly so we will keep our eyes open.

IT'S THE DOG IN YOU

An veterinary scientist named Mike Davis says there's no doubt about it: The world's greatest athletes, of any species, are the canines who pull sleds at the Iditarod. Now, in a project funded by the Pentagon's research arm, he's coming up with ways to make us more like them.

YOU WOULDN'T KNOW IT to look at Tony, because he's pretty slight, but he's fed a diet that's mostly fat—up to 60 percent. "You'd kill a pet dog with that," says Erica McKenzie, a professor of large-animal medicine at who's studied sled dogs with . If people ate such a diet, we'd all be diabetics living—not for long—on Lipitor." In sled dogs we have a model where they exist continuously on a high-fat diet and are highly insulin sensitive," says . "It raises the question of whether all those associations [between fatty diets and diabetes] are just an association and not a cause and effect. Or is there something else that goes along with a high-fat diet in humans that causes insulin resistance? Or maybe there's something you can do while eating a high-fat diet that prevents you from developing insulin resistance."

Fat, it turns out, is likely the key to the dogs' remarkable endurance. When dogs are dropped from the Iditarod, it usually happens during the first few hundred miles. Some show signs of severe fatigue and muscle soreness, just like a person would. But something allows the rest of the dogs to finish the race. Zirkle herself is amazed, she says, that her own dogs seem more eager to run when they've finished the race than they did one or two days in. In fact, as Davis and his colleagues discovered, the fittest dogs are actually able to repair themselves as the race goes on.

"You take dogs out and you run them 100 miles per day today and tomorrow and the next day, and they come back, sleep, eat, do it again without having any outward sign of it mattering," Davis explains. "You would assume they're achieving homeostasis," a condition of optimal operation. "You'd never think that they're at the furthest thing from homeostasis. They're damaging tissues, depleting energy stores, their oxidative stress is through the roof, and all those things are supposed to make you crater." Yet the dogs don't crater. "What they showed us is that there is an ability to adapt to that stress in a matter of days so that it is no longer stressful," says.

has seen signs that even the gastric-ulcer damage appears to be under repair by the end of a marathon race. Most important, though, the dogs rebuild their glycogen stores. It's likely that they manage this miracle by literally switching much of the fuel they use from glucose to fat. No cell burnout, no lactic-acid buildup, no long-term depletion of stored glycogen.In a journal article, Davis and colleagues used scientific understatement, calling the discovery "a novel finding." In fact, Bielitzki recalls, the news "shocked everybody."Nobody knows exactly how the dogs make the switch, except that the ability must be under genetic control. So the quest is on to figure out what those genetic signals are.

THE PAYOFFS TO THIS kind of research can often appear so far away that they live only in the dreams of sci-fi aficionados, but giving athletes and soldiers the abilities of sled dogs may not be as distant. The program has already had some small "deliverables," in DARPA parlance. Stanford researchers have developed a cooling device, now marketed by a company called Avacore Technologies, that lets athletes and soldiers cool their core body temperature the way dogs do. It's being used by college football teams at Stanford and and by the 49ers. Lance Armstrong has been drinking a sports supplement based on quercetin, a plant-based flavonoid that's supposed to increase production of mitochondria.

Applying 's findings on how sled dogs use energy doesn't necessarily have to wait for some gene-modification breakthrough. thinks it's possible humans already have some capacity to use large amounts of fat as a primary fuel. Within the next five years or so, dietary and training interventions—like diets high in the right fatty acids or training methods that exploit whatever latent abilities people have to push past the initial damage stage of endurance—could be developed in a way that will give humans greater ability to adapt to exercise. Once the genetic switches the dogs use to flip from carbs to fats are revealed, he tells me, people might be screened for human analogs as part of the selection process for extremely demanding sports or military duties.

According to the Army, Davis's "work is expected to provide the foundation for construction and prospective testing of appropriate training conditions for the induction [of] fatigue resistance in animals and, eventually, humans."

None of that seems outlandish. But Bielitzki doesn't believe in thinking conservatively. He considers it likely there'll be a pill, maybe in about a decade, that will allow people to do what sled dogs do. "That was the intent," he says. "That is still the hope."