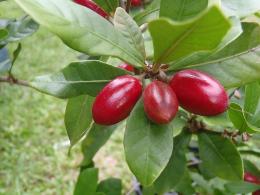 They have unraveled how the miracle fruit is able to convert acidic or bitter tasting food into food that tastes sweet.  The next step is to synthesize the molecule itself in order to use it more readily.

The applications are surely endless.  We have many potential wild foodstuffs that could be readily produced provided we could overcome their actual taste.

Recall that the sweet eating apples we are familiar with are completely unnatural and need to be protected from insects because of their sweetness.  I grew up on a century old farm with a couple of dozen wild apple that insects completely ignored.  So did we of course.  At the same time one tree produced a tart winter apple that only sweetened long after the snow blew.  It became our own staple and a huge producer thanks to all the care it received.  Another tree produced wonderfully sweet apples, all of which were wormy and heavily scaled.

Obviously a sour apple is the preferred cultivar provided we could actually eat them.  This may do the trick.

As an aside , I recently learned through reading a history on Johnny Appleseed that no one ever cared about sour or sweet, because they all went into the press to produce a mash for cider production.  Suddenly those wild apples on my farm make perfect sense.

Almost all crops that are vulnerable to insects could easily be protected in this way and then make edible by the application of such a protocol.

(PhysOrg.com) -- Though not very well known in the , at least until the past few years, the miracle fruit is a cranberry like fruit that has the unique property of being able to make acidic or bitter foods taste sweet. And while the protein that makes this possible has been known for quite a while, just how exactly it did its trick has been a mystery; until now. A team of Japanese and French researchers working together have solved the puzzle and have published the results of their efforts in theProceedings of the of Sciences.

Miracle fruit, the berry of the Synsepalum dulcificum plant, grows naturally in and the locals there have long known of its sweetening properties. Pop one of the little berries in the mouth and for an hour, foods like pickles, beer, grapefruit or lime, taste like sweet versions of their former selves. More recently, the effects of the miracle fruit have been popularized by flavor-tripping parties, so named because of the odd sensational resemblance to the effects of hallucinogens. Or as Keiko Abe, one of the team leads, reports, the effect is rather magical.

To get to the bottom of how the miracle fruit performs its magic, the team grew human kidney cells in a dish that were engineered to produce sweet receptor proteins. They then applied a chemical that caused the receptor cells to light up when activated. Next, they applied miraculin, the protein in miracle fruit that is responsible for the sweetening effects. After that they added different substances with different pH levels and found that the miraculin had three distinct impacts on the receptors. At low levels there is little effect, at medium levels the miraculin boosted response and at high levels the receptors were activated on their own.

This all happens, the researchers say, because the miraculin protein changes shape when exposed to acids. The higher the level, the more it changes shape. And because the protein binds very strongly to the receptors in the human tongue, those changes in shape change the way the receptors react when acids are introduced into the mouth. The bottom line is, the higher the pH level in a substance, the sweeter it tastes to the person doing the tasting.

The end result of this research might be the introduction of a whole new kind of artificial sweetener, either as an ingredient, or as an additive by users wishing only to sweeten ordinary foods. And now that the effects of miraculin are better understood, researchers will next try to see if they can create it from scratch rather than having to rely on Mother Nature to grow it for them.
More information: Human sweet taste receptor mediates acid-induced sweetness of miraculin, PNAS, Published online before print September 26, 2011,doi: 10.1073/pnas.1016644108

Miraculin (MCL) is a homodimeric protein isolated from the red berries of Richadella dulcifica. MCL, although flat in taste at neutral pH, has taste-modifying activity to convert sour stimuli to sweetness. Once MCL is held on the tongue, strong sweetness is sensed over 1 h each time we taste a sour solution. Nevertheless, no molecular mechanism underlying the taste-modifying activity has been clarified. In this study, we succeeded in quantitatively evaluating the acid-induced sweetness of MCL using a cell-based assay system and found that MCL activated hT1R2-hT1R3 pH-dependently as the pH decreased from 6.5 to 4.8, and that the receptor activation occurred every time an acid solution was applied. Although MCL per se is sensory-inactive at pH 6.7 or higher, it suppressed the response of hT1R2-hT1R3 to other sweeteners at neutral pH and enhanced the response at weakly acidic pH. Using human/mouse chimeric receptors and molecular modeling, we revealed that the amino-terminal domain of hT1R2 is required for the response to MCL. Our data suggest that MCL binds hT1R2-hT1R3 as an antagonist at neutral pH and functionally changes into an agonist at acidic pH, and we conclude this may cause its taste-modifying activity.