Tree of Life for Mammals Enhanced 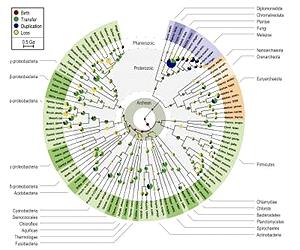 This reports that we now have a rigorous framework to work from in further work which will now focus on improving resolution.  It is an obvious step that allows us to supplant prior methodologies with far greater rigor.  It is also a step expected since work seriously became properly automated on genome work.

I am sure we will soon have access to copies of this chart and I am sure there may even be surprises, but mostly regarding the actual antiquity of specific lines.

The momentum in biological research today is breathtaking and a far cry from two generation ago when the methodology available was scant.

An international research team led by biologists at the University of California, Riverside and Texas A and M University has released for the first time a large and robust DNA matrix that has representation for all mammalian families. The matrix - the culmination of about five years of painstaking research - has representatives for 99 percent of mammalian families, and covers not only the earliest history of mammalian diversification but also all the deepest divergences among living mammals.

"This is the first time this kind of dataset has been put together for mammals," said Mark Springer, a professor of biology at UC Riverside, who co-led the research project with William Murphy, an associate professor of genetics at Texas A and M.

"Until now, no one has been able to assemble this kind of matrix, based on DNA sequences from many different genes, to examine how the different families of mammals are related to each other. This dataset, with all the sequences we generated, provides a large and reliable foundation - a springboard - for biologists to take the next leap in this field of work. We can now progress from phylogeny that has representatives for all the different mammalian families to phylogenies that have representatives for genera and species."

Phylogeny is the history of organismal lineages as they change through time. A vast evolutionary tree, called the Tree of Life, represents the phylogeny of organisms, the genealogical relationships of all living things.

As most introductory biology textbooks will show, organisms are biologically classified according to a hierarchical system characterized by seven main taxonomic ranks: kingdom, phylum or division, class, order, family, genus, species. For example, humans are known taxonomically as Homo sapiens. Their genus is Homo, the family is Hominidae, the order is Primates and the class is Mammalia.

To date divergence times on their phylogeny of mammalian families, Springer and colleagues used a "relaxed molecular clock." This kind of molecular clock allows for the use of multiple rates of evolution instead of using one rate of evolution that governs all branches of the Tree of Life. They also used age estimates for numerous fossil mammals to calibrate their time tree.

"We need to have calibrations to input into the analysis so that we know, for example, that elephants and their nearest relatives have been separate from each other since at least the end of the Paleocene - more than 55 million years ago," Springer said. "We were able to put together a diverse assemblage of fossil calibrations from different parts of the mammalian tree, and we used it in conjunction with molecular information to assemble the most robust time tree based on sequenced data that has been developed to date."

"This study is the beginning of a larger plan to use large molecular data sets and sophisticated techniques for dating and estimating rates of diversification to resolve much larger portions of the mammalian tree, ultimately including all described species, as well as those that have gone recently extinct or for which only museum material may be available," Murphy said.

"Only then can we really begin to understand the role of the environment and events in earth history in promoting the generation of living biodiversity. This phylogeny also serves as a framework to understand the history of the unique changes in the genome that underlie the vast morphological diversity observed in the more than 5400 living species of mammals."

Springer explained that the research team looked for spikes in the diversification history of mammals and used an algorithm to determine whether the rate of diversification was constant over time or whether there were distinct pulses of rate increases or decreases. The researchers found an increase in the diversification rate 80-82 million years ago, which corresponds to the time - specifically, the end of the Cretaceous Terrestrial Revolution - when a lot of different orders were splitting from each other.

"This is when flowering plants diversified, which provided opportunities for the diversification of small mammals," Springer said.

Springer and colleagues also detected a second spike in the diversification history of mammals at the end of the Cretaceous - 65.5 million years ago, when dinosaurs, other large terrestrial vertebrates, and many marine organisms went extinct, opening up a vast ecological space.

"Such ecological voids can get filled quickly," Springer explained. "We see that in mammals, even though different orders such as primates and rodents split from each other back in the Cretaceous, the orders did not diversify into their modern representations until after the Cretaceous, 65.5 million years ago. The void seems to have facilitated the radiation - that is, branching in conjunction with change - of different orders of several mammals into the adaptive zones they occupy today. After the Cretaceous, we see increased diversification, with some lineages becoming larger and more specialized."

The researchers stress that their time tree is a work in progress. In the next two years, they expect to construct a supermatrix, also based on gene sequences, and include the majority of living mammalian species. The current work incorporates 164 mammalian species.

"Our phylogeny, underpinned by a large number of genes, sets the stage for us to understand how the different mammalian species are related to each other," Springer said. "That will help us understand when these species diverged from each other. It will allow us to look for taxonomic rates of increase or decrease over time in different groups in various parts of the world so that we can understand these diversification rate changes in relationship to important events in Earth's history - such as the diversification of flowering plants and changes associated with climatic events. Researchers routinely make use of phylogenies in diverse fields such as ecology, physiology, and biogeography, and the new phylogeny for mammalian families provides a more accurate framework for these studies.

"When you understand how taxa are related to each other," Springer added, "you can start to understand which changes at the genome level underpin key morphological changes associated with, say, flight and echolocation in bats or loss of teeth in toothless mammals. In other words, you can pinpoint key molecular changes that are associated with key morphological changes. This would be extremely difficult, if not altogether impossible, without the kind of robust molecular phylogeny we have developed."

The research team also reports that their results contradict the "delayed rise of present-day mammals" hypothesis. According to this hypothesis, introduced by a team of scientists in a 2007 research paper, the ancestors of living mammals underwent a pulse of diversification around 50 million years ago, possibly in response to the extinction of archaic mammals that went extinct at the end of the Paleocene (around 56 million years ago). The earlier extinction event around 65.5 million years ago, which resulted in the demise of the dinosaurs, had no effect on the diversification of the ancestors of extant mammals, according to the 2007 research paper.

"Our analysis shows that the mass extinction event 65.5 million years ago played an important role in the early diversification and adaptive radiation of mammals," Springer said. "The molecular phylogeny we used to develop the matrix is far more reliable and accurate, and sets our work apart from previous studies."
Posted by arclein at 12:01 AM