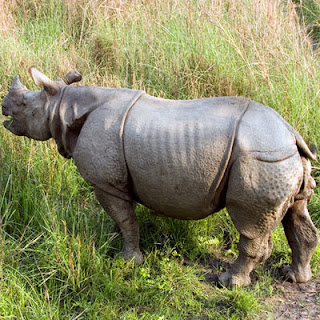 This is very interesting news, particularly as it also applies to other herbivores.  Rhinos are quite believable as they are not the sharpest tools in the woodshed.  Yet this also sounds like a great barrier for deer.  On the other hand, somehow I do not see this discouraging an elephant any time soon.

After saying all that this also provides an important ingredient to the creation of permanent forest edge barrier zones whose purpose is to discourage larger animals from coming out into fields.

My first component would be to plant a staggered row of hawthorn trees able to overlap each other as they mature.  This happens to be the backbone of European hedge systems anyway.  Since the plants are meant to grow into apple tree sized specimens, it is also necessary to maintain an apron in front of the barrier some fifteen feet or so across.  This could readily be planted with chamomile.  The barrier itself can by placed into the forest edge to lower the amount of land needed.

Such a barrier would become impenetrable to deer and humans for that matter.  The main difficulty will be to harvest the berries conveniently or even to maintain it properly.

Once established, such a wild wood barrier should easily do its job and the bonus of the chamomile is that it discourages curiosity about the nearby field at least through smell.  Maintenance itself should remain minimal.

Nepalese use chamomile to scare off wayward rhinos

It can soothe a troubled mind and calm a rebellious gut, but a remote Nepalese forest community has discovered another unlikely use for chamomile — it scares away unruly rhinos.

The ethnic Tharu people who live beneath the southern foothills of the have been plagued for generations by the one-horned rhinoceros, which ventures onto their land, trampling crops and sometimes injuring villagers.

Loath to use violent means to keep the endangered grazing species at bay, they discovered that planting the daisy-like chamomile on the edge of the forest would ward off their nuisance neighbors, who hate the smell.

“It works as a barrier. Because of the peculiar smell of this unpalatable [herb] ... it helps to stop wildlife from entering farmland. It works not only for rhinos, but also other herbivores,” said Suman Bhattarai of the Partnership for Rhino Conservation, which helps Nepalis live side-by-side with the rhino.

The Tharu are said to be direct descendants of Buddha and to have lived for centuries in the forests of the Terai, a narrow strip of land which extends for 900km along the southern border of .

Their innovative use of chamomile has seen the tribespeople of Suryapattuwa village shortlisted for the BBC’s US$20,000 World Challenge Award, which rewards enterprise helping to maintain sustainable local communities.

“Animals from the nearby buffer zone area of the used to enter our farmland and destroy huge amounts of crops. We started this work with support from the national park and WWF ,” community leader Mangal Tharu Yogi told the Post.

While large herbivores baulk at the pungent odor, chamomile is used to treat a wide variety of human complaints, including indigestion, heartburn and vertigo.

Bhattarai said tribespeople who might not be inclined to spend time growing a crop they cannot eat should think of selling it as an herbal remedy as well as using it as a deterrent.

Thousands of greater one-horned rhinos, also known as the Indian rhinoceros, once roamed and northern , but their numbers have plunged over the past century because of poaching and human encroachment of their habitat.

Wildlife experts spent a month earlier this year conducting an exhaustive survey and counted 534 rhinos in Nepal’s southern forests — 99 more than when the last such study was carried out in 2008.