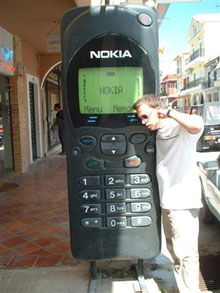 This is a solid study that does reassure us that cell phone use is not a causation agent for cancers.   It was conducted over a long enough period to give us the optimum demonstration of its overall long term safety.  At this point, we are allowed to go back to sleep.

The real difficulty is that we lack causation for most cancer.  Yet the public demands it.

A better answer is to live as close as possible to a natural life while living modern.  Raw is clearly a good idea as is moderate exercise.

The cell phone does not have to be held against the ear.

ScienceDaily (Oct. 20, 2011) — There is no link between long-term use of mobile phones and tumours of the brain or central nervous system, finds new research published online in the British Medical Journal.

In what is described as the largest study on the subject to date, Danish researchers found no evidence that the risk of brain tumours was raised among 358,403 mobile phone subscribers over an 18-year period.

The number of people using mobile phones is constantly rising with more than five billion subscriptions worldwide in 2010. This has led to concerns about potential adverse health effects, particularly tumours of the central nervous system.

Previous studies on a possible link between phone use and tumours have been inconclusive particularly on long-term use of mobile phones. Some of this earlier work took the form of case control studies involving small numbers of long-term users and were shown to be prone to error and bias. The International Agency for Research on Cancer (IARC) recently classified radio frequency electromagnetic fields, as emitted by mobile phones, as possibly carcinogenic to humans.

The only cohort study investigating mobile phone use and cancer to date is a Danish nationwide study comparing cancer risk of all 420,095 Danish mobile phone subscribers from 1982 until 1995, with the corresponding risk in the rest of the adult population with follow-up to 1996 and then 2002. This study found no evidence of any increased risk of brain or nervous system tumours or any cancer among mobile phone subscribers.

So researchers, led by the of in , continued this study up to 2007.

They studied data on the whole Danish population aged 30 and over and born in after 1925, subdivided into subscribers and non-subscribers of mobile phones before 1995. Information was gathered from the Danish phone network operators and from the Danish Cancer Register.

Overall, 10,729 central nervous system tumours occurred in the study period 1990-2007.
When the figures were restricted to people with the longest mobile phone use -- 13 years or more -- cancer rates were almost the same in both long-term users and non-subscribers of mobile phones.

The researchers say they observed no overall increased risk for tumours of the central nervous system or for all cancers combined in mobile phone users.

They conclude: "The extended follow-up allowed us to investigate effects in people who had used mobile phones for 10 years or more, and this long-term use was not associated with higher risks of cancer.

"However, as a small to moderate increase in risk for subgroups of heavy users or after even longer induction periods than 10-15 years cannot be ruled out, further studies with large study populations, where the potential for misclassification of exposure and selection bias is minimised, are warranted."

In an accompanying editorial, Professors Anders Ahlbom and Maria Feychting at the Karolinska Institutet in say this new evidence is reassuring, but continued monitoring of health registers and prospective cohorts is still warranted.
Recommend this story on Facebook, Twitter,