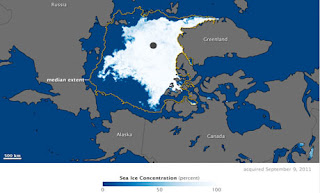 It is apparently happening far faster than I imagined.  This article also gives us a good sense of sailing times and the actual size of the window of opportunity.

It is correct to say that right now, the North Eastern passage is clearly viable and will likely remain so.  At worst, sporadic ice breaker support may be necessary. If and when the arctic climate actually reverts to ice accumulating mode we may actually get a few years of grace.  In the meantime the contraction of the ice mass is continuing apace and assures us of generally clear sailing conditions from July through October.

The eight day sailing time is excellent as that gives the operator plenty of leeway in planning his trip.  He knows several days ahead of his passage time and available weather is normally good enough to predict anything like an unusual ice mass getting in the way.

The passage is also consistently opening up but is still terribly vulnerable to been cut off through errant winds and nasty ice floes.  Yet again the shipping time to contact is surely low enough to safely plan a trip with low risk of interception by ice.

The take home is that the first commercial shippers have made the passage and you can be sure that they will all be trying it next year.  If that works out as well as it appears to look, then those ice reinforced vessels will be immediately ordered and become a standard requirement.

I suspect that tanker traffic will be restricted to the North Eastern passage were one is not navigating through narrow channels, but instead only the open sea.

In reality, the unimaginable has happened and the two legendary passages are really open for business.  It is now safe enough.

Ice coverage fell to below 2007 coverage levels and the actual ice mass appears to be much lower and is now accelerating its decline to reach a new equilibrium with the annual production.

Scandinavian shipowners say cargo routes through the Arctic, made possible by warmer temperatures, would save money and emissions

The image above was made from observations collected by the Advanced Microwave Scanning Radiometer and shows the extent of sea ice melt. The yellow outline shows the median minimum ice extent for 1979/2000. Photograph: Aqua/NASA

Supertankers and giant cargo ships could next year travel regularly between the Atlantic and  Oceans via the Arctic to save time, money and emissions, say Scandinavian shipowners.

New data from companies who have taken advantage of receding Arctic sea ice this year to complete several voyages across the north of shows that the "northern sea route" can save even a medium-sized bulk carrier 18 days and 580 tonnes of bunker fuel on a journey between northern and . The voyage would normally take upwards of 40 days.

Even bigger fuel and time savings have been reported this week by Danish shipping company Nordic Bulk Carriers which says it saved a third of its usual costs and nearly half the time in shipping goods to via the .

The route, which cuts around 4,000 nautical miles off the southern route from the to the Pacific, has barely needed an ice-breaker since July as annual sea ice melted to a near record low extent. "We saved 1,000 tonnes of bunker fuel – nearly 3,000 tonnes of CO2 – on one journey between and north ," said Christian Bonfils, a director of Nordic Bulk Carriers in .

The shipowners, who anticipate that the northern route could gradually be opened for four to six months a year as air and sea temperatures increase, are exploring the possibility of regular summer passages through the . This could save them €180,000-300,000 on each voyage, they say.

"The window for sailing the route is four months now, but the Russians say it is seven [if the cargo ships are accompanied by Russian atomic icebreakers]. When we can save 22 days on transportation, it is very good business for us," said Bonfils.

Apart from time savings, the shipowners can avoid Somali pirates and the high insurance premiums they attract if their ships pass through the .

The Russian prime minister, Vladimir Putin, last week predicted that the route would soon rival the Suez canal as a quicker trade link from Europe to . "The Northern sea route will rival traditional trade lanes in service fees, security and quality," he told a conference organised by the Russian Geographical Society in in September.

This is seen as wildly optimistic by the Scandinavian shipowners, who are nevertheless encouraged by the speed of change in high latitudes. The Arctic was crossed in a record eight days in August by an STI Heritage tanker on a route between the US and Thailand, and on 20 August, a160,000 tonne supertanker with 120,000 tonnes of gas made the passage, becoming the largest commercial ship ever to sail the route.

The route, which used to be known as the North-east passage, runs along the Russian Arctic coast from on the Barents Sea, along Siberia, to the . Environment groups have warned that an Arctic shipping rush could accelerate global warming. While they accept that ships would burn less fuel and emit less CO2, they fear oil spills and other maritime accidents, as well as "black carbon", the sooty residue of partly burned fuel which is deposited on ice and is a short-lived but powerful "forcer" of climate change.

"The prospect of the creeping industrialisation of the high north is deeply worrying. More ships bring more chance of major accidents and will mean more climate pollutants on the back of more melting of the ice," said Ben Ayliffe, Arctic campaigner with Greenpeace.

But shipowners cautioned that special ice-strengthened ships were needed and it is too early to build ships especially for the journey.

In a further sign that the was opening up, Russian atomic icebreakers received 15 requests to escort Arctic voyages in 2011, against four in 2010.

Canadian and American maritime experts have estimated that 2% of global shipping could be diverted to the Arctic by 2030, rising to 5% by 2050.