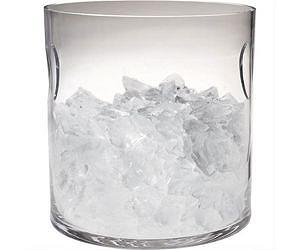 I am sure that this will not be the last word.  I remember as a lad clearing a sheltered slab of what I like to refer to as biologically active water (fish survived swimming in it) and clearly seeing the bottom of the pool a good three feet down through over a foot of completely clear ice.  The crystals surely began as long needles and slowly interwove to form this unusual ice form.  Most ice is formed with short crystals and this provides a cloudy media.

I have found plenty of implied questions with our common water and ice that appear when a slow cooling process is applied.  The work unfortunately takes patience.

Glass like ice may turn out to have some importance although certainly not where humans wish to function.  At the temperatures used, metals also change behavior and may not be trusted.

Rapid cooling of ordinary water or compression of ordinary ice: either of these can transform normal H2O into an exotic substance that resembles glass in its transparency, brittleness, hardness, and luster.

Unlike everyday ice, which has a highly organized crystalline structure, this glass-like material's molecules are arranged in a random, disorganized way.

Scientists have studied glassy water for decades, but the exact temperature at which water acquires glass-like properties has been the subject of heated debate for years, due to the difficulty of manipulating pure glassy water in laboratories.

Understanding the properties of water is important for astrobiologists because the survival of life as we know it depends on the presence of liquid water.

Now, in a paper published in the AIP's Journal of Chemical Physics, physicists from the University of Pisa and the Consiglio Nazionale delle Ricerche at the Institute for Chemical-Physical Processes (CNR-IPCF) in Pisa, Italy, claim to have put an end to the controversy.

Unlike previous attempts in which scientists tried to measure the transition temperature directly, the CNR team "snuck up" on the answer by inferring the temperature from a thorough study of the dynamics of water. They examined water's behavior in bulk and at the nano-scale, at high temperatures and low, combining their own experimental results with 15 decades' worth of research by colleagues.

They also measured the glass transition temperature and the molecular behavior of water that had been doped with other materials, and used this information to set lower and upper boundaries on the transition temperature for pure water. Taken together, their evidence points to a magic number of approximately 136 Kelvin (-137 Celsius).

The authors say their work supports traditional views of this phenomenon and refutes recent claims that the transition is above 160 Kelvin (-113 Celsius).

The research could find uses in technology associated with food science and the cryopreservation of biological materials, as well as in the study of water in comets and on the surface of planets.
Posted by arclein at 12:01 AM