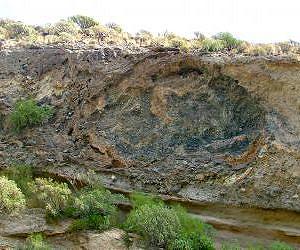 Essentially the lesson is simple.  We need to identify all volcanoes and particularly the mature one in order to determine if the natural geometry presents a directed collapse risk of significance.  Certainly the Canaries abound in this type of risk.

The events themselves may be millions of years apart, but they surely can be predicted, just as Mt St Helens could have been predicted had we had even one similar situation.  Since then we have been adept at getting out of the way.

The real risk from oceanic Volcanoes comes from the mega tsunamis spawned and again their landfalls are predictable.  It is no trick to have this information for every piece of populated coast, as we have for hurricanes.

That way the knowledge is always on hand and is actionable.  A school will know that they are possibly exposed to several threats and easily prepare for it every year as a matter of tradition.

geology discovery is among 'world's best'

Pablo Davila-Harris looks at part of the huge landslide deposit discovered on Tenerife, showing the chaotic and shattered rubble from the collapsed volcano. (The central dark debris-block is about 15 meters in diameter and must weigh many tons). Credit: Pablo Davila-Harris.

Volcanologists from the of have uncovered one of the world's best-preserved accessible examples of a monstrous landslide that followed a huge volcanic eruption on the Canarian .

Seven hundred and thirty-three thousand years ago, the southeast slopes of collapsed into the sea, during the volcanic eruption.

The onshore remains of this landslide have just been discovered amid the canyons and ravines of Tenerife's desert landscape by volcanologists Pablo Davila-Harris and Mike Branney of the 's Department of Geology.

The findings have been published in this October's edition of the international journal Geology. The research was funded by CONACYT, .

Dr Branney said: "It is one of the world's best-preserved accessible examples of such an awesome phenomenon, because the debris from such landslides mostly spreads far across the deep ocean floor, inaccessible for close study.

"The beautifully-displayed rubble includes blocks of rapidly chilled lava, added as the volcano erupted. Radioactive minerals within them enabled the researchers' colleague, Michael Storey at , to provide such a precise date for this natural catastrophe.

"Climate change is often invoked as a trigger for ocean-island landslides, but in this case it seems that a growing dome of hot lava triggered the landslide by pushing the side of the volcano outwards.

"In the shattered landscape that remained, lakes formed as rivers were dammed by debris, and the change to the shape of the island altered the course of explosive volcanic eruptions for hundreds of thousands of years afterwards."

The researchers state that such phenomena are common but infrequent, and understanding them is vital, for their effects go far beyond a single ocean island. Tsunamis generated from such events may travel to devastate coastlines thousands of miles away.

"Understanding the Earth's more violent events will help us be prepared, should repeat performances threaten," they state.