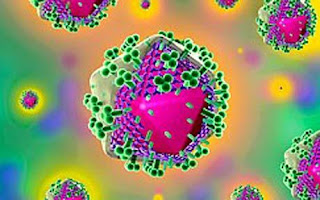 Since its emergence, the battle against AIDs has been a marathon arm wrestle that today at some effort and expense allows victims to live out their natural life span.  The corner was turned around fifteen years ago and since then we have seen steady progress and general improvement.

Now we have a way to possibly vaccinate healthy people.

It is now correct to anticipate the last leg of this journey in which the virus is driven to extinction.  It will still take decades perhaps, but if vulnerable populations can be made largely immune, then the virus must inevitably tend to die out.

Curiously, while we can never accept the losses, we can be grateful for the massive investment made in cellular biology that this disease produced.  We are surely a decade ahead.

HIV could be reduced to a "minor chronic infection" akin to herpes, scientists developing a new vaccine have claimed.

Spanish researchers found that 22 of 24 healthy people (92 per cent) developed an immune response to HIV after being given their MVA-B vaccine.

Professor Mariano Esteban, head researcher on the project at the National Biotech Centre in , said of the jab: "It is like showing a picture of the HIV so that it is able to recognise it if it sees it again in the future."

The injection contains four HIV genes which stimulate T and B lymphocytes, which are types of white blood cells.

Prof Esteban explained: "Our body is full of lymphocytes, each of them programmed to fight against a different pathogen.

"Training is needed when it involves a pathogen, like the HIV one, which cannot be naturally defeated".

B cells produce antibodies which attack viruses before they infect cells, while T cells detect and destroy infected cells.

The study showed that almost three-quarters of participants had developed HIV-specific antibodies 11 months after vaccination.Over a third developed one type of T cell that fights HIV, called CD4+, while over two-thirds developed another, called CD8+.

Overall, 92 per cent developed some sort of immune response. However, that is not the same thing as being protected from HIV infection: the response could be inadequate to provide protection.

Prof Esteban acknowledged the vaccine was at an early stage, describing it as "promising".

The next step is to test it in people with HIV to see if it works as a "therapeutic" - reducing the viral count.

The researcher was optimistic, saying: "MVA-B vaccine has proven to be as powerful as any other vaccine currently being studied, or even more.

"If this genetic cocktail passes Phase II and Phase III future clinic trials, and makes it into production, in the future HIV could be compared to herpes virus nowadays."

By that he meant HIV could become a "minor chronic infection" that only resulted in disease when the immune system was otherwise compromised.

Other vaccines are in development. One, called the HIV-v vaccine, developed by British researchers, resulted in a 90 per cent reduction in viral count in HIV-infected people. Most trials so far have been small scale.

There have also been many false dawns with prospective HIV vaccines.

Jason Warriner, clinical director for the Terrence Higgins Trust, described the Spanish project as "a step in the right direction".