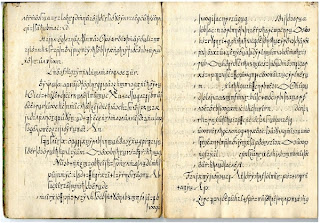 With any luck we will finally decode the body of ciphers that have been floating around for centuries sometimes and end the speculation that they naturally accrue.  The amount of human effort they have attracted has never been justified in real terms and I am sure their decipherment will be a disappointment.

The sooner done the better in fact.

Reconstructing ancient alphabets and their texts is a much more promising problem.

US and Swedish researchers have cracked the code of the 300-year-old Copiale Cipher with the help of a new computer program that may help to decipher other legendary secretive manuscripts.

"This opens up a window for people who study the history of ideas and the history of secret societies," computer scientist Kevin Knight of the said in a statement Wednesday.

"Historians believe that secret societies have had a role in revolutions, but all that is yet to be worked out, and a big part of the reason is because so many documents are enciphered."

The 75,000-character Copiale Cipher describes the rituals and political leanings of an 18th-century German secret society, which bound the manuscript in gold and green brocade paper, the USC statement said.

The rituals, encoded in a series of abstract symbols interspersed with Greek and Roman characters, indicate that the secretive group had a fascination with eye surgery but that members were not actually eye doctors.

Knight, along with Beata Megyesi and Christiane Schaefer of in , used a computer program designed to help quantify the recurrence of certain symbols and identify other patterns.

"When you get a new code and look at it, the possibilities are nearly infinite," Knight said. "Once you come up with a hypothesis based on your intuition as a human, you can turn over a lot of grunt work to the computer."

Knight's team initially thought the message was contained in the Greek and Roman characters, but after the computer program disproved that hypothesis, they shifted their attention to the abstract characters, eventually translating the German words for "Ceremonies of Initiation" and "Secret Section."

Knight plans to target other famous coded messages, including the ciphers sent by the Zodiac Killer, an American serial murderer in the 1960s and early 1970s who sent cryptic messages to the press and has never been caught.

He also wants to try the program out on "Kryptos," an encrypted message carved on a sculpture at CIA headquarters, and the medieval Voynich Manuscript, considered among the most mysterious manuscripts ever found.