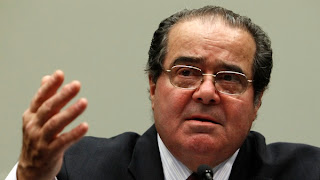 The unintended consequence of too much law is that too many failed lawyers are available to become judges and even the bottom of the barrel can be picked clean.

We already understand that the criminalization of the drug trade made it more expensive for the victims and has made it almost impossible for that same victim to receive medical help.  Now we discover it has lowered the quality of justice delivery simply by swamping the courts with frivolous drug cases easily handled at even an administrative level.

So long as prohibition is adhered to our justice system both in the and elsewhere is and will be dragooned into this frightfully abusive exercise in folly that is effectively self perpetuating.

The justice system was never meant to be a job creation program.

At least Scalia is seeing the folly and speaking out about it and I hope someone is listening although I cannot claim to be hopeful.  Politicians made an awful lot of bad law based on a fundamental misunderstanding of the problem itself.  Politicians have to either completely throw it all out at least or perhaps come up with a corrective protocol that addresses the problem.

We cannot have a superior justice system without superior judges and that pool is naturally way too small.  It is time to ration what is criminal.

Supreme Court Justice Antonin Scalia isn't a supporter of legalizing drugs. But he does believe that passing federal laws against them has done harm to the government. "It was a great mistake to put routine drug offenses into the federal courts," he told the Senate Judiciary Committee Wednesday. The Wall Street Journal went on to reportScalia's belief that the laws forced Congress to enlarge the federal court system, and diminished "the elite quality of the federal judiciary."


This isn't a new problem. Chief Justice William Rehnquist complained as far back as 1989 that the war on drugs was overwhelming the federal judiciary. In 1995, Kathleen F. Brickley, an academic, found that "the Federal system is strained to capacity due, in large part, to the government's war on drugs."


Said an nonpartisan immigration nonprofit last year, "Federal prosecutors along the Southwest border with -- many already strained by the rise in their immigration caseloads -- are facing a new challenge: how to handle a sharp jump in drug cases. Justice Department data analyzed by the Transactional Records Access Clearinghouse show that during the first four months of FY 2010 drug cases in this region had surged by almost a third (30 percent) from what they were just 16 months ago and were up by 7 percent over levels at the end of FY 2009."


The federal War on Drugs is diminishing the quality of our federal justice system. As far as I can tell, no one contests that conclusion. It would be one thing to bear that cost in exchange for a policy victory. After decades of failure, however, no one even expects the drug war to be won.


Returning drug policy to the states would be a first step in the right direction.