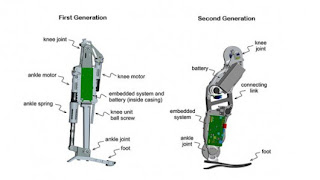 Prosthetics are been improved at a fast clip and the benefits are been applied globally.  Here we have another improvement in which the device is no longer passive but is rigged to anticipate movements.  This allows climbing and obviously allows movement over an irregular surface which is a huge boost for users.

Even more impressive we are seeing individual artisans using prosthetic technology in the third world to produce equivalents and empower the powerless.  The trickle down effect of this knowledge is visibly impressive.

We still have a ways to go before it becomes possible to simply grow out the limb, and this is certainly a continuing good story that continues to attract good press.

It was not a good day for 16 year old Craig Hutto. On June 27, 2005, wading in crystal clear waters off a near-deserted beach 50 miles south of , Craig was attacked by an 8-foot bull shark and lost his right leg from above the knee. Today Hutto is a 6-foot 4-inch 23 year old studying Nursing at . Fortunately for him, is also the home of where its Center for Intelligent Mechatronics has for seven years been developing an advanced prosthetic limb. They also happened to need a Lab Assistant to help them test it.

Professor Michael Goldfarb and his team are on the seventh iteration of a limb that combines a low weight (9lbs / 4 kg) aluminum alloy construction with embedded processors and powerful motorized knee and ankle joints. A rechargeable battery provides enough power for three days or 8 miles (14 km). A wide array of sensors monitor the leg's position and movement and the on-board software tries to anticipate the wearer's needs when sitting, standing, walking etc. A "stumble" routine for instance will try to lift the leg high to clear the obstacle and then plant it for stability. This anticipation means the leg operates much more like a real limb which allows the wearer to walk with a normal gait, even up and down stairs or across uneven terrain. See the video below.

Getting the Assistant position at Vanderbilt helped Hutto to pay his way through college but also allowed him to contribute to the development of an intelligent prosthetic limb that will greatly help many people that find themselves in his predicament.

Freedom Innovations, a manufacturer of lower limb prosthetics. hopes to bring the licensed design to market soon at a price close to that of a standard passive device.