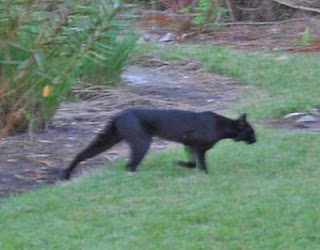 What this identifies are locales which represent refugia for odd critters.  There are certainly many such areas to be identified as yet and it is a pretty difficult task when we begin with most completely rejecting the existence of the critters per se.

Yet large primates and cats both share some rather unusual traits.  They are clever animals who need a lot of elbow room.  Ample game presently exists in the form of burgeoning deer herds.  I really do not think they were ever threatened with hunger. Inevitably they are also nocturnal.

Once you factor in outright intelligent avoidance for large creatures, it is no longer too surprising that we are never lucky.  It also informs us that we actually have a lot of legitimate surprises out there once we get serious about monitoring appropriate game trails at night.

It is one thing to receive reports of a strange creature – whether Bigfoot, the Loch Monster, or the Chupacabra – seen in one particular locale. But it’s quite another thing entirely to get multiple reports of several different unidentified beasts from one clearly delineated area! And, yet, within the field of Cryptozoology, that’s precisely what we see on numerous occasions.

Take, for example, ’s Cannock Chase – a sprawling and dense mass of heath and woodland situated in the . For years, an absolute menagerie of unknown animals and out-of-place critters has been seen roaming the Chase. The list is as long as it is impressively weird, and includes Bigfoot-type entities, marauding werewolves, large and exotic cats of the puma variety, giant snakes, oversized birds and much more.

Then there’s , – near ’s east-coast. In December 1980, the forest was the site of what – today – is considered by many to be ’s most famous UFO encounter. Over the course of several nights in the latter part of the month, numerous military personnel reported seeing UFOs, strange lights, and even alien-type entities deep in the woods. A major cover-up was put into place to hide the startling truth of the affair, claim numerous UFO researchers.

But, that’s not all: Rendlesham is also the reputed home of a Sasquatch-style creature known as the Shug Monkey. Big cats have been reported prowling the woods for years. As have ghostly, glowing-eyed, black dogs. And centuries ago in the waters off the very nearby town of , a hair-covered, crazed creature – half man and half animal - was said to have been captured and tamed.

And let’s take a trip to Loch . You thought Nessie was the strangest thing haunting those old dark waters? Nope! Big black cats – similar to those seen in the aforementioned Cannock Chase and - consider the woods surrounding the loch to be their home too. Legend also tells of shape-shifting monsters known as Kelpies skulking around the area.

There are even reports of large animals seen in the waters of the loch that sound nothing like the image of Nessie that most people have – namely, that of a long-necked, humped animal with flippers.

Moving across the Atlantic Ocean, the huge Big Thicket woods in are home to ape-men, wild men of the woods, and – yet again – big-cats. The Big Thicket is also home to something known as the Ghost-Light: a spooky, ethereal ball of bright floating light that - by night - surfs the old roads that run through and around the Big Thicket.

And the curious list goes on and on. All of this, of course, begs a very important question? Why do certain areas of our globe seem to act as full-blown “hot-spots” for weird beasts of wildly varying types? Some researchers suggest that the areas themselves are as significant as the creatures that lurk within them.

A number of theorists have suggested the idea – and, granted, an idea is all it can be perceived as right now – that certain parts of our planet act as portals or “doorways” to other realms of existence (extra-dimensions, in other words), through which all of these strange creatures come as the mood takes them.

Sounds controversial? Yes! Many might say such a scenario sounds just too controversial. And maybe they’re right.

On the other hand, if such portals do exist – and one day science proves their existence – this may well go some way towards explaining why certain parts of the Earth appear to be true magnets of the monstrous kind.

Nick Redfern is the author of many books, including his latest, The Real Men in Black.