Is Israel its Own Worst Enemy? 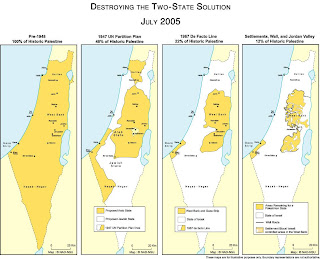 The fundamental problem with political Islam is that it has been built around a convenient anti Semitism that is indoctrinated from early childhood such that it becomes a matter of unquestioned and unquestionable faith.

Some leaders play it down but it is still going on in the school rooms and shape a public opinion who is easily led away from their own misery by the mantra of anti-Semitic lies.

We in the west have often chosen to believe that this is not going on.  My problem with all this is that while Hitler only had around a decade to do this trick, the Arabs have been playing this game for some sixty years such that no one is around who is not affected seriously by the poison.

The situation on the ground is that has established a steadily growing population that is about to become energy sufficient.  The population of 8,000,000 means that because it is a fully developed modern state, it can today field a bare minimum of 800,000 and if pushed it can field 1,600,000 armed combatants.  This force will be modern and highly effective.  It already maintains air superiority in its natural range.

The practical reality has been shown to be that no Arab leader can negotiate in good faith and he must always maintain a genocidal agenda. This is the reality presented to any Israeli leadership.  They have merely done the obvious.  Negotiate in good faith in the certain knowledge that the other side will always renege.  When the inevitable happens, charge a small price for that.  Make sure that you are not obviously been seen to be too greedy.

The Palestinians are running the risk of been thrown out of the West Bank in sufficient numbers so as to make the prospect of an independent Palestinian State there impossible.  It may sound impossible, but I suspect that they will make the mistake of launching another intifada allowing the Israelis the casa belli needed to effect their outright removal.

Below is an open letter to Nicholas Kristof regarding his New York Times columnof October 5, 2011, “Is its own worst Enemy?”

Your essay of October 5 in the New York Times, “Is its own worst enemy?” raised several questions.

You reference “the Palestinian Cause.”  What is the Palestinian cause?  Arafat used to assert that it was ending Israeli occupation and getting his state. Remember Marwan Barghouti’s moving op-ed in the Washington Post back in 2002? (“Want Security? End the Occupation”).  But let’s recall that Palestinian leaders have always been candid with their own, while selling us the bill of goods that we want to hear.  The Hajj Amin el-Husseini, ’s “Grand Mufti” back in the Mandate era (1922-1947), minced no words about his end game: the annihilation of the Jews of . Hence his alliance with Hitler and his plans for a concentration camp, replete with gas chambers and crematoria, in .

And Arafat, while speaking plaintively to us about occupation and the destitute Palestinians who have only their bodies with which to fight (hoping that such a deceitful concept would justify suicide bombers, and that we would not notice the 50 tons of armament on the Karine A), ranted to his followers in Arabic : Jihad, Jihad, Jihad; a million martyr; from the River to the Sea Palestine will be free (no room for Israel in that scenario); the goal is not peace, the goal is victory and victory is the destruction of Israel.

Hamas is worse.  Not only does the Hamas Covenant commit to the destruction of , but also their leaders exhort to the annihilation of every Jew in “.”

So obviously the “Palestinian cause” is NOT the end of the occupation and the creation of a Palestinian state. The end is the destruction of and the annihilation of its Jews….and the Palestinian leaders tell us this themselves, in the NY Times and in the UN and on their own radio and TV and newspapers and with hate-teach in their schools and hate-preach in their mosques.  These are not “radicals” or “extremists,” a few weirdoes whose crank ideas are out of step with their own society. These are the President of the PA, its Ambassador to , the rulers of Hamas, the highest imams (Muslim spiritual leaders) of the Palestinian people, the directors of the PA’s ministry of education, etc.

You harshly critique Prime Minister Netanyahu’s hard line on settlements.  But are the “settlements” the cause for the violence?

Recall that the PLO was formed in 1964.  There were no “settlements” then, except the “settlements” of Tel Aviv and and the rest of down-town . None the less, Arafat and his cronies vowed to end the occupation, wipe off the map, replace it with , and kill its Jews.   Keep in mind that the original version of the “PLO Covenant” (1964, Article 24) stated specifically: “This Organization does not exercise any regional sovereignty over the West Bank in the Hashemite Kingdom of Jordan, in the Gaza Strip or the Himmah area”. Since the PLO’s original Covenant explicitly recognized Judea, , and the eastern portion of , and as belonging to other Arab states, the only “homeland” it sought to “liberate” in 1964 was the State of . However, the PLO revised its Covenant on July 17, 1968, a year after the Six-Day War, to remove the operative language of Article 24, thereby asserting for the first time ever a “Palestinian” claim of sovereignty to the West Bank and Strip. This area was not part of the “Palestinian Homeland” in 1964 when it was under Jordanian sovereignty; but when it came under Israeli sovereignty it suddenly took on a new faux-historic status.

Palestinian leader tell us, perhaps without meaning to, that settlements are not the problem.  Note too that good old fashioned concept central to western logic:  cause and effect.  Cause must come before effect.  The West Bank “settlements” cannot be the cause of the terrorism and the hatred and the violence because all of those existed before there were any West Bank “settlements;” nor have these bleak and tragic attributes abated in the slightest with the end of all Israeli “settlements” in the Strip.

This radical concept, that the “settlements are not the problem,” was validated by none other than a member of the Palestinian National Council, Zahir Muhse’in,  in his interview with the Amsterdam-based newspaper “Trouw”[i] in 1977:

“The Palestinian people does not exist. The creation of a Palestinian state is only a means for continuing our struggle against the state of for our Arab unity. In reality today there is no difference between Jordanians, Palestinians, Syrians and Lebanese. Only for political and tactical reasons do we speak today about the existence of a Palestinian people, since Arab national interests demand that we posit the existence of a distinct ‘Palestinian people’ to oppose Zionism. For tactical reasons, , which is a sovereign state with defined borders, cannot raise claims to and , while as a Palestinian, I can undoubtedly demand , , Beer-Sheva and . However, the moment we reclaim our right to all of , we will not wait even a minute to unite and .”

So Mr. Muhse’in tells us that it is not the “settlements,” it is not the water rights, it is not the borders, it is not Jerusalem, and it is not even the so-called “Palestinian refugees” that stoke the violence.  The violence comes from the unabashed, unrelenting, and unmitigated commitment of Arab leaders to destroy .  The concepts “Palestinian People” and “Historic Palestine” and “Palestinian national self-determination” are all hoaxes, fictions invented to facilitate the Arab terrorist destruction of Israel and to legitimize the terrorism.

So what you call Prime Minister Netanyahu’s “hard line” decisions about “settlements” are in reality the reasoned and rational realpolitik of ’s leaders’ need to face intractable Arab genocidal enmity.

I was quite taken aback by your suggestion that “nothing is more corrosive (to the peace process) than ’s growth of settlements.”  Are you serious?

I most sincerely urge you to reassess that statement. Recall, for example, the c. 10,000 qasam rockets from the Gaza Strip after Israel unilaterally and unconditionally vacated the Strip in a globally unprecedented peace-making gesture; or Abbas’ promise to escalate the conflict after he gets his state from the UN; or the cold-blooded murder of Israeli civilians near Eilat just a few weeks ago by terrorists infiltrating from the Sinai peninsula, or the brutal murder of a father and infant son in the West Bank just a few days ago; not to mention Hamas’ endless relentless diatribe of annihilation and rhetoric of genocide.  Bombings and arson and kidnapping and torture and murder and attempted mass murder and threatening genocide are far more corrosive to peace than building apartments.

So, is its own worst enemy? No!  Mr. Kristof, it is not.  It should be rather obvious that Israel’s worst enemies now are Iran, the Muslim Brotherhood, Hamas, Hezbollah, Fatah, the PLO, Islamic Jihad, the PFLP, the DFLP, the PFLP-GC, Ansar al-Islam, the Al-Aqsa Martyrs Brigade,  al-Gama’a al-Islamiyya, al-Qaeda, the Taliban, Hizb-ut-Tahrir, Jayyish al-Jihad, and Sayyif Allah, to mention just a few.  Next in line as worst enemies are the Arab confrontation states, quiescent now that they are engaged in their “Arab Spring,” but ever ready to scapegoat and demonize ; and, were there ever to be even a reasonable hope of victory,  to attack with all the vigor they could muster.

Then comes Turkey, once a sotto voce ally of Israel; but since the ascent of its Islamist government led by Prime Minister Recep Tayyip Erdogan, a development which you seem not to have noticed, given your assertion that Turkey is “…Israel’s most important friend in the region” (but don’t feel too bad, our own Secretary of Defense, Leon Panetta seems also not to have noticed), it hasofficially declared war on Israel by announcing that it will send Turkish warships into Israel’s coastal waters to support flotillas of wannabe blockade-busters heading for the Gaza Strip.

The tragic and bitter reality is that the so-called Palestinian national movement is the only one of its kind in the entire world and across all of world history whose only operative paradigm is terrorism, and whose unique and unrepentant goal is the destruction of a sovereign state and the genocide of its Jews.  If these terrorists would lay down their weapons, there would be no more violence.  If would lay down her weapons, there would be no more .