Growing Salt Cedars in the Desert 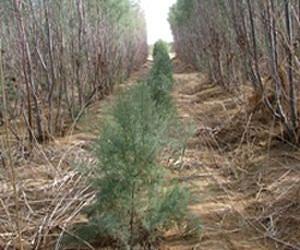 The idea seems to be to plant salt tolerant cedars in particular in deserts while watering them with waste and brackish water.  It will at least provide cover and lower the surface temperature. This may even be good enough to allow a little rainfall.  It is still a long ways from a sound working protocol.

I have suggested providing artificial mangrove swamps along the coast to provide a saturated atmosphere able to generate precipitation inland.  Inland we create forest cover that then recycles that moisture many times.

In the beginning salt tolerant cedars are likely to be important and used often.

Everyone has to get over the idea that it can be accomplished in a small acerage.

Growing Something out of Nothing

Fears of global warming and its impact on our environment have left scientists scrambling to decrease levels of atmospheric carbon we humans produce. Now, researchers are doing their part to reduce humanity's carbon footprint by successfully growing forests in the most unlikely place - deep in 's .

With environmental "extras" such as a local plant species, recycled sewage water unsuitable for agriculture, and arid lands unusable for crops, a group of researchers including Profs. Amram Eshel and Aviah Zilberstein of TAU's Department of Molecular Biology and Ecology of Plants at the George S. Wise Faculty of Life Sciences and the university's new RenewableEnergy Center have discovered a winning combination.

In many parts of the world, including areas of , central Asia and the desert, their new crop of plants would be not only viable in difficult terrain, but valuable in terms of carbon reduction. These standing crops, grown on land once considered barren, can soak up carbon dioxide from the atmosphere and convert it into oxygen. Their research is soon to be published in the European Journal of Plant Science and Biotechnology.

Though maintaining our current forests is a necessary initiative, Prof. Eshel says, it is not enough to off-set human carbon output. In their quest to create forests that diminish carbon dioxide in the atmosphere, many countries have been converting fertile agricultural lands into forests.

But TAU researchers believed that encouraging growth on a piece of land that was traditionally barren, such as desert land, was a step in a better direction.

"When you take the overall carbon balance of converting agricultural land and freshwater into energy products, you may not gain that much," says Prof. Eshel. "You're investing a lot of energy in the process itself, thus releasing a lot of carbon into the atmosphere."

To conserve fresh water, the researchers used water considered of low quality, such as recycled sewage water and salt water that was the by-product of inland desalination plants. The final piece of the puzzle was to find a plant hearty enough to successfully grow in the desert.

The researchers turned to Tamarix, a botanical genus that includes salt cedar trees and is indigenous to the old-world deserts. Some 150 different varieties of the botanical genus were used, grown in both a common garden setting and in densities that mimicked commercial crops.

With the first harvest of trees just last summer, researchers have much to process, including analyzing the amount of carbon dioxide the crops have successfully captured from the atmosphere. The answers will determine how much carbon such a crop can offset.

A source for biofuel?

The cut trees themselves might also be used as a source of renewable energy. These "biomass" or "biofuel" crops, derived from natural crops, could help to reduce dependence on traditional fossil fuels such as coal. But the question of where to grow crops dedicated to fuel production had to be addressed, since converting agricultural land could have the side effect of creating food shortages.

Arid and previously unused desert lands provide an ideal solution, Prof. Eshel says. To make his approach economically feasible, much more land would be needed than can provide. But similar tracts of land, such as the , are big enough to grow these types of crops on a larger scale. He adds that what has been done in the Israeli desert can be replicated elsewhere to great effect.

This research is a collaboration between TAU's of Environmental Science, the of in , , and the in . Funds for the study were provided by the Italian Ministry for the Environment, Land and Sea.
Posted by arclein at 12:01 AM