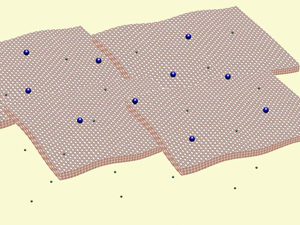 This is a nifty way to make up a zeolite sheet consistently so it can be used in process engineering.  This is going to be very useful.  It is a combination of two mechanical handling methods that has done the trick.

Zeolites applications have been held up because it is tricky to work with and this is a significant and welcome improvement.

As mentioned it will also facilitate low energy separation.  One can easily envisage a cell of membranes able to split out a particular group of chemicals.

A University of Minnesota team of researchers has overcome a major hurdle in the quest to design a specialized type of molecular sieve that could make the production of gasoline, plastics and various chemicals more cost effective and energy efficient. The team devised a means for developing free-standing, ultra-thin zeolite nanosheets that as thin films can speed up the filtration process and require less energy.

Separating mixed substances can demand considerable amounts of energy—currently estimated to be approximately 15 percent of the total energy consumption—part of which is wasted due to process inefficiencies. In days of abundant and inexpensive fuel, this was not a major consideration when designing industrial separation processes such as distillation for purifying gasoline and polymer precursors. But as energy prices rise and policies promote efficiency, the need for more energy-efficient alternatives has grown.


U of M researchers developed “carpets” of flaky crystal-type nanosheets that can be used to separate molecules as a sieve or as a membrane barrier in both research and industrial applications to save money and energy.


One promising option for more energy-efficient separations is high-resolution molecular separation with membranes. They are based on preferential adsorption and/or sieving of molecules with minute size and shape differences. Among the candidates for selective separation membranes, zeolite materials (crystals with molecular-sized pores) show particular promise.

While zeolites have been used as adsorbents and catalysts for several decades, there have been substantial challenges in processing zeolitic materials into extended sheets that remain intact. To enable energy-savings technology, scientists needed to develop cost-effective, reliable and scalable deposition methods for thin film zeolite formation.


The team used sound waves in a specialized centrifuge process to develop “carpets” of flaky crystal-type nanosheets that are not only flat, but have just the right amount of thickness. The resulting product can be used to separate molecules as a sieve or as a membrane barrier in both research and industrial applications.

“We think this discovery holds great promise in commercial applications,” said Kumar Varoon, a chemical engineering and materials science Ph.D. candidate and one of the primary authors of the paper published in Science. “This material has good coverage and is very thin. It could significantly reduce production costs in refineries and save energy.”
Thin zeolite films are attractive for a wide range of applications, including molecular sieve membranes, catalytic membrane reactors, permeation barriers, and low-dielectric-constant materials. Synthesis of thin zeolite films using high-aspect-ratio zeolite nanosheets is desirable because of the packing and processing advantages of the nanosheets over isotropic zeolite nanoparticles. Attempts to obtain a dispersed suspension of zeolite nanosheets via exfoliation of their lamellar precursors have been hampered because of their structure deterioration and morphological damage (fragmentation, curling, and aggregation). We demonstrated the synthesis and structure determination of highly crystalline nanosheets of zeolite frameworks MWW and MFI. The purity and morphological integrity of these nanosheets allow them to pack well on porous supports, facilitating the fabrication of molecular sieve membranes.