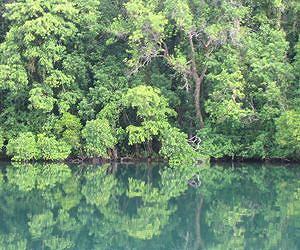 This hardly increases our confidence in the inputs used in the climate models running around.  A one third change attributed to El Nino is huge and disconcerting to boot.  In fact it appears that CO2 levels respond directly to short term increases in global temperatures rather quicker than I suspected at least.

This makes the reverse claim even more spurious and suspect than before.  It does at least conform to the long term geological record.

Since the climate has warmed up while our production did also increase, what portion of the CO2 increase is actually caused by increasing human production since the warming is also a significant immediate driver of CO2 release.  Of course, I would like to see it drop now in the next decade to assist us in evaluating it.

Productivity of land plants may be greater than previously thought

The global uptake of carbon by land plants may be up to 45 per cent more than previously thought. This is the conclusion of an international team of scientists, based on the variability of heavy oxygen atoms in the carbon dioxide of the atmosphere driven by the El Nino effect.

. The global uptake of carbon by land plants may be up to 45 per cent more than previously thought. This is the conclusion of an international team of scientists, based on the variability of heavy oxygen atoms in the carbon dioxide of the atmosphere driven by the El Nino effect.

As the oxygen atoms in carbon dioxide were converted faster than expected during the El Nino years, current estimates for the uptake of carbon by plants are probably too low.

These should be corrected upwards, say the researchers in the current issue of the scientific journal NATURE.

Instead of 120 petagrams of carbon, the annual global vegetation uptake probably lies between 150 and 175 petagrams of carbon. This value is a kind of gross national product for land plants and indicates how productive the biosphere of the Earth is.

The reworking of this so-called global primary productivity would have significant consequences for the coupled carbon cycle-climate model used in climate research to predict future climate change.

Lisa Welp of the Scripps Institution of Oceanography at the of in and her colleagues evaluated the data for the global isotopic composition of the greenhouse gas CO2 over the last 30 years.

This analysis indicated regular fluctuations between years and a connection with the El Nino phenomenon in the Pacific. Overall, El Nino years are warmer. They are also characterised by greater precipitation in South America and less intensive monsoons in .

The researchers found a more rapid recovery of the isotopic ratios following the El Nino events than assumed, indicating a shorter conversion time for CO2 in the terrestrial biosphere. On the basis of these data, the authors calculate the so-called global primary productivity (GPP). They now propose correcting this in the global models from 120 to 150-175 petagrams) of carbon annually.

Since 1977 the isotopic ratios in the carbon dioxide of the atmosphere (18O/16O und 13C/12C) have been measured in order to better understand the global carbon cycle, as the exchange processes between the biosphere, the atmosphere and the oceans are reflected in these values.

"We assume that the redistribution of moisture and rain in the tropics during El Nino raises the 18O/16O ratio in precipitation and plant water and then signals this to the atmospheric carbon dioxide", explains Lisa Welp the new approach of the researchers.

"Our atmosphere is a perfect blender. Changes in its levels of trace gases - such as carbon dioxide - reflect the overall release and uptake of trace gases from all sources. So if you measure the carbon exchange of a forest ecosystem, for example, you "only" get the net exchange of all the carbon taken up by the trees for photosynthesis and all the carbon released by the trees and soil ", writes Dr. Matthias Cuntz of the Helmholtz Centre for Environmental Research (UFZ) in his commentary in the same issue of NATURE. The gross-exchange fluxes, such as photosynthesis, are however accessible only with difficulty.

"Global estimates therefore depend upon a number of assumptions. This includes, for example, how many of the CO2 molecules entering a plant are actually fixed by photosynthesis. The researchers of Lisa Welp's team assume that around 43 per cent of all CO2 molecules entering a plant are taken up by the plant. If this were only 34%, the estimate would fall to about 120 billion tons of carbon - that is, to the currently accepted value", for Matthias Cuntz reason of thought.

In his opinion, the new findings do not completely upset the research to date. Nevertheless, they demonstrate an interesting new method for the determination of plant productivity over large areas. In future, the combination of several isotopic methods with conventional measurements represents a promising approach.

The now published study was carried out under the direction of Ralph F. Keeling, a professor of oceanography and the son of the late Charles David Keeling, after whom the so-called Keeling curve was named.

This graph shows the concentration of CO2 of the volcano Mauna Loa on since the year 1957. In the 1950s the CO2 fraction in the earth's atmosphere was still around 315 ppm.

In 2011, by comparison, it has already increased to 390 ppm. With his measurements Keeling was able to show for the first time that the concentration of the greenhouse gas increases in relation to changing land use and the combustion of fossil fuels.

This new study underscores the importance of long-term measurements of the isotope 18O in the carbon dioxide of the atmosphere from the scientific point of view, as this occupies a key position between the carbon cycle and the hydrogen cycle.

How do Chemtrails contribute to this? Aluminum and Barium of Chemtrails are sprayed into the atmosphere. These chemicals and more/various other chemicals sprayed comes back down to earth in rain polluting plants, animals, soil and water.
How long have they been spraying this planet with chemicals known to be deadly (therefore affect) changes to living organisms & nature?