Fertilizer Trees Catch on in Africa 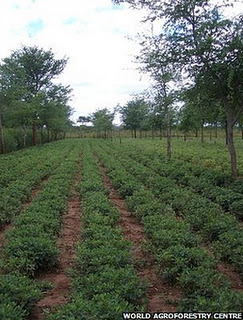 The idea of planting trees throughout a field crop acreage appears to be catching on in the tropics.  At first it was merely a partial restoration of former practises with sporatic results.  Now science is been applied.

Here we hear about growing a nitrogen fixer which is then coppiced at the beginning of the growing season.

What we are waking up to is that we can tackle tropical soils with this, eventually in conjunction with biochar to lock in nutrients at the surface.  Such trees can also be chosen for deep roots that pull deep nutrients back up to the surface.

Thus even a widely spaced acacia planting will deliver deep nutrients and drop an annual crop of leaves for cattle feed.  The planting provides partial shade during the growing season allowing superior crop production.  This all has to be integrated into a husbandry plan, but it appears that this is actually under way.

It is the early days of scientific agriculture in , although those involved will likely take offense for that, but I expect to see African productivity in agriculture to be spectacular before it is optimized.  No one would ever claim it was optimized ever, but the past decade as information began to flow has seen an eruption of improvements.

Researchers from the World Agroforestry Centre say poor soil fertility is one of the main obstacles to improving food production in .

Some of the studies have shown that in TFS (Tree Fertiliser Systems) across as a whole, yields are doubling or more in two-thirds of cases.


Nextbigfuture looked at fertiliser trees in articles in 2009 such as cities 2.0 in the reinventing farming section.
The Faidherbia tree - pending some further research on its impact on the water table - may now provide a natural and widespread fertilizer fix. According to the Agroforestry Centre, farmers in testify the tree is like a "fertilizer factory in the field", as it takes nitrogen from the air, fixes it in the leaves and subsequently incorporates it into the soil. The Agroforestry Centre's research showed that in maize yields increased by 280 per cent in the zone under the tree canopy compared with the zone outside the tree canopy. In , unfertilized maize yields in the vicinity of Faidherbia trees averaged 4.1 tonnes per hectare, compared to 1.3 tonnes nearby but beyond the tree canopy.


International Journal of Agricultural Sustainability - Agricultural success from Africa: the case of fertilizer tree systems in southern Africa (Malawi, Tanzania, Mozambique, Zambia and Zimbabwe)
In response to the declining soil fertility in southern and the negative effects that this leads to, such as food insecurity besides other developmental challenges, fertilizer tree systems (FTS) were developed as technological innovation to help smallholder farmers to build soil organic matter and fertility in a sustainable manner. In this paper, we trace the historical background and highlight the developmental phases and outcomes of the technology. The synthesis shows that FTS are inexpensive technologies that significantly raise crop yields, reduce food insecurity and enhance environmental services and resilience of agro-ecologies. Many of the achievements recorded with FTS can be traced to some key factors: the availability of a suite of technological options that are appropriate in a range of different household and ecological circumstances, partnership between multiple institutions and disciplines in the development of the technology, active encouragement of farmer innovations in the adaptation process and proactive engagement of several consortia of partner institutions to scale up the technology in farming communities. It is recommended that smallholder farmers would benefit if rural development planners emphasize the merits of different fertility replenishment approaches and taking advantage of the synergy between FTS and mineral fertilizers rather than focusing on `organic vs. inorganic' debates.

Researchers from the World Agroforestry Centre say poor soil fertility is one of the main obstacles to improving food production in .

The results appear in the International Journal of Agricultural Sustainability.

"In , it is generally agreed that poor soil management - along with poor water management - is most greatly affecting yields," explained co-author , head of the centre's Impact Assessment team.

He said that despite chemical fertilisers having been on the market for more than half a century, farmers appeared reluctant or unable to buy them.

"Therefore, there have been a lot of attempts to bring in other types of nutrients from other systems - such as livestock and plants" he told BBC News.

"We have been working quite a lot on what is broadly referred to as 'fertiliser tree systems'."

Although it has been known for centuries that certain plants, such as legumes, "fix" nitrogen in the soil and boost food crop yields, Dr Place said that the centre's researchers had been looking to develop a more active management approach such as FTS.

In TFS across as a whole, yields are doubling or more in two-thirds of cases”
Frank PlaceWAC

"Some farms, for example in , where the farms are larger, it is possible to rest arable land and allow it to lie fallow," he observed.

"But in place such as much of , where population densities are higher, they cannot afford to fallow their land; so we came up with alternative management systems where they could intercrop the trees with the (maize)."

While the technique is not new, Dr Place said that some of the nitrogen-fixing species used by farmers were probably not the most effective.

For example, farmers in had been using Cajanus cajan (also known as pigeon pea).

"A lot of the nitrogen was being stored in the trees' seeds; so there was an effort to use other trees that put a greater volume in the soil, such asGliricidia sepium (one of its common name is mother of cocoa)," he said.

"A really nice thing about G. sepium is that we have been coppicing some of those trees for 20 years and they still continue to grow back vigorously."

However, he acknowledged that there were a number of challenges that had to be addressed in order to maximise yields.

For example, some systems suggested planting rows of trees between rows of crops with mixed results.

"We realised that there were a few management problems with that sort of system - what tended to happen was that there was too much competition between the crops and the trees," Dr Place explained.

"We developed a new management system where the trees were cut very low to the ground at the time you are planting the crop so then there was no light competition.

"The trees go into a dormant state when you cut them like this, so the root system is not competing straight away for the nutrients, so the maize is free to become established.

"The trees only really start to come out of the dormant phase when the maize is already tall."

Another challenge was to provide enough seeds in order to have mass-scale planting. He said that balancing the provision of high-quality seeds with large local engagement was another hurdle that had to be overcome.

But the rewards in improved yields were noticeable, he added.

"Some of the studies have shown that in TFS across as a whole, yields are doubling or more in two-thirds of cases."

Where the systems were not delivering such good results, Dr Place said that scientists were looking to refine current practices and modify them to suit the local conditions.
'Climate proofing'

One example, Dr Place said, was the use of Faidherbia albida (common names include winter thorn and apple-ring acacia) in West African arable landscapes.

"It has a deep penetrating tap root, and it can secure a good water supply even in dry years," he explained.

"Generally speaking, tree roots do go much deeper than crop roots, so it is recycling nutrients and water from deeper reaches.

"There are also studies showing that these roots act as conduits and bring up water to surface root systems (such as those belonging to crops)."

The editor-in-chief of the International Journal of Agricultural Sustainability, Professor Jules Pretty from Essex University in , said the study illustrated that there was a growing movement of agricultural innovations across Africa that were increasing yields and at the same time improving the environment.

"Trees and shrubs in agricultural systems seem to break some of the rules of agriculture - in this case, farmers are using shrubs to create a diverse rotation pattern rather than year-on-year maize," he told BBC News.

"The trees fix nitrogen and improve the soil; the leaves can be fed to livestock; the crops then benefit greatly in subsequent years."