Electrons Heat up in Cold Graphene 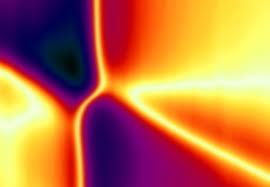 Read this one carefully.  Unless I am way off nearly perfect energy conversion devices can exist.  This is another raw beginning from a completely unexpected behavior. We have already been putting graphene through cartwheels and now it is turning into pure magic.

Whatever we can imagine, it wants to produce.

As I have posted before, graphene is a materials revolution way out in front of all other elements.

Electrons heat up in graphene

Some like it hot: electrons heat up while lattice stays cool

Graphene has once again amazed researchers with its bizarre properties – this time in the way it reacts to light. A team in the has discovered that the material does not behave like a conventional semiconductor when exposed to light but instead produces "hot carriers" that generate a photocurrent. The finding could be useful for creating new types of ultrafast and highly efficient photodetectors and energy-harvesting devices such as solar cells.

Graphene is a layer of carbon just one atom thick that has a range of unique electronic, mechanical and optical properties that could have great technological promise. Indeed, since its discovery in 2004 the "wonder material" has been used to create transistors and other prototype components.

Hot carriers at all temperatures

Researchers are also keen to create optical devices using graphene and this latest discovery by Pablo Jarillo-Herrero and colleagues at the Massachusetts Institute of Technology and could point the way forward. "This so-called hot-carrier regime is very unusual and is normally only seen at extremely low temperatures or in very non-linear processes," explains Jarillo-Herrero. "However, in graphene it occurs at all temperatures from very low up to room temperature – and in the linear regime – when the material is excited with a laser."

When a conventional semiconductor is excited with light, high-energy electron–hole pairs are produced. These charge carriers subsequently generate a photocurrent, which is usually driven by an electrostatic potential difference. Such processes form the basis of modern optoelectronics devices.

Until now, researchers believed that graphene was no different in its reaction to light – although some suspected that thermoelectric processes could be at play in the material. The new research by the MIT–Harvard team has unambiguously confirmed for the first time that these processes are indeed responsible for photocurrent generation in graphene.

The researchers obtained their results by making a host of optoelectronic measurements on complex graphene p–n-junction nanodevices that they had fabricated themselves in the laboratory. In particular, they performed precise spatially resolved optical-excitation microscopy and electron-transport measurements by shining laser light with a wavelength of 850 nm onto the graphene p–n interfaces. They then measured the photocurrent produced in the devices as the laser spot was scanned over the samples.

The team observed that a strong photocurrent was produced at the p–n contact that increased as the power of the laser beam was increased. The maximum photocurrent recorded was 5 mA/W at low temperatures, a value that is six times higher than that seen in previous graphene optoelectronic devices.

According to the researchers, such high values are a result of the photothermoelectric effect. "It turns out that when you shine a light on graphene, the electrons in the material heat up, and remain hot, while the underlying carbon lattice remains cool," explains Jarillo-Herrero. "It is these hot electrons that then produce a current." The electrons in the excited graphene cannot cool down easily because they couple poorly to the carbon lattice and so cannot transfer their heat to it, he adds.

"Our study is of a very fundamental nature," says Jarillo-Herrero, "and forces us to ask myriad questions." For example, how efficient are the photogenerated charge carriers and can the dimensions of the devices we made be optimized to maximize the current produced? What happens if the number of graphene layers is changed and what happens if the devices are coupled to optical cavities?

"All of these questions will be relevant when making new types of ultrafast and highly efficient photodetectors and energy-harvesting devices, the basic operating principles of which could be quite different from those of standard semiconductor devices because they rely on hot-carrier generation," he says.

"Graphene with its new exciting properties allows for unprecedented engineering of novel thermo-optoelectronic structures," Gerasimos Konstantatos of the Institut de Ciències Fotòniques in , who was not involved in the work, tells physicsworld.com. "This new research shows that delocalized photogenerated hot carriers produce a high photoresponse using electrostatic control of doping in a dual-gated graphene device. Harnessing hot carriers in this material is indeed an important finding, given its bandgap-less nature," he adds.

The work will appear in Science
Posted by arclein at 12:01 AM