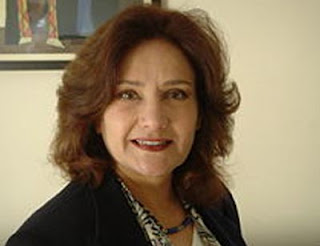 The Muslim Brotherhood is yet another Neo Nazi movement in this case hiding under the skirts of Islam.  The Nazis aped the approach of radical Islam in their run for power and here we have Islamic hate mongers aping the worst Nazi behavior and applying intimidation to suppress opposition and silence critics.

This is an illegal association clandestinely committed to the destruction of the right of anyone to criticize their version of reality.  I make no effort to pretend that it is a religious reality or sensibility because such reality is completely at variance to expressions of any violence.

My contention is that it needs to be confronted aggressively in the same way we confront the peddlers of hate literature.  This will end the nonsense that is described in this article.

In the meantime we need to support and promote voices such as Nonie’s who know the gritty reality and are able to articulate the social problems hidden behind Islamic patriarchal tribalism.   The more voices, the lower the individual risk.

The recent conviction of the 11 was a reminder of how far the campus arms of the Muslim Brotherhood will go to silence dissenting speakers. For all their protestations during the trial, they don’t believe in free speech, what they believe in is a monopoly on campus speech.

Nonie Darwish, an ex-Muslim and an informed critic of Islam, has had her talks assailed by Brotherhood campus affiliates numerous times. In 2009, at members of the Muslim Students Association did their best to disrupt a speech by Darwish. That same year at , a fire was set in a bathroom right before her speech to scuttle her presentation. Now, as Darwish was set to speak at a Federalist Society event at the of Law, another Muslim Brotherhood organization, CAIR, deployed a slightly more subtle line of attack.

While Muslim Brotherhood front groups routinely bring extremist speakers to campus, such as Imam Abdel Malik Ali and Norman Finkelstein, CAIR wanted the Federalist Society to provide equal time to a Muslim speaker to “balance” her views. The MSA has never extended such an offer to Jewish student groups, yet the Brotherhood expected it to be granted to them.

In her speech at , Darwish described arriving at her first job in and seeing a sign that said it did not discriminate. “For the first time in my life, I felt free and equal to men under the law.”

But the form of discrimination that Darwish escaped in the Middle East is coming to America, and the modern campus is ground zero for its advance, as followers of a racist and sexist ideology use political correctness and intimidation to decide who can and cannot speak.

As a critic of Islam and the founder of “Arabs for ,” Darwish has been a natural target for a movement that believes women shouldn’t be seen or heard, and that should be a radioactive pile of ash. For two years the Brotherhood, through its campus and off-campus affiliates, has been stalking and harassing her. And if CAIR had been allowed to shut down her speech at a university named after the “Father of the Bill of Rights” it would have been a major victory for Sharia law in .

But instead, Darwish’s speech went ahead as scheduled to the dismay of the Brotherhood, whose chief criticism of her has been that she is “unqualified to speak about Sharia law.” Since only male scholars can be truly qualified, their position forbids the chief victims of Sharia law from speaking out against it. Banning women from criticizing Sharia law is like prohibiting African-Americans from speaking out against segregation. [Let us hear it for double think]

According to the Brotherhood, Darwish’s life in a Sharia society where she came into contact with polygamy and honor killing does not qualify her to speak about Islam. Similarly, Western leftists claimed that the refugees who escaped the or were unqualified to discuss Marxism-Leninism because all they had done was live under it.

Darwish and other women like her are so very important because they take the Sharia debate out of the sphere of the purely academic and into the practical. While the Brotherhood spends a great deal of time discussing how a Sharia state should be run, Darwish comes loaded with experience on how they actually are run. And that is what makes her so dangerous to them.

Theories of perfect societies are seductive in academic circles, as the campus affinity for Marxism and now Islamism demonstrates. But beneath the ivory towers and golden domes the system is upheld by the oppression of hundreds of millions of people who are prevented from speaking unless they agree with the dominant ideology. The alternative for them is death.

While Islamist groups have tried to monopolize the debate, speaking on behalf of the entire Arab and Muslim world, Darwish, Wafa Sultan and others like them remind us that there is another side. The side of the oppressed. The side of those who live under the system and have to leave it before they can feel safe speaking out against it.

As Islamist groups gain influence in the , that safety is rapidly becoming an illusion. The arson at Boston University, the campus harassment and CAIR’s tarring of critics of Sharia as Islamophobes who are to be denied their right of free speech, and events like them are turning American universities into Saudi universities where criticism of Islam is forbidden and criticism of Israel and the United States is mandatory.

“The truth is that I am afraid of Islamic laws that condemn me and thousands, if not millions of others, who left the religion of Islam. Sharia is the only religious law in the word that condemns those who leave the religion to death. I do not think it is an unreasonable phobia to speak of such a tyrannical law. Actually it is my duty towards myself, and the civil and human rights of many others,” Darwish said in response to CAIR’s charge that she was an Islamophobe.

Though the Federalist Society and the of Law did not bow to an organization which is closely linked to terrorist mass murderers, the battle continues from campus to campus. And from country to country.

“Where is their outrage over the Christian mother of 5 held in an Afghanistani jail awaiting execution for blasphemy? Where are their letters of objection to the Iranian government for their plan to execute an apostate?” Darwish asks of CAIR.

The Brotherhood speaks of peace and justice, but they mean only such peace and justice as is to be found in the messages of a delusional 7th century warlord. This crude and brutal order of superiors and inferiors, conquerors and conquered, is what they have inflicted on the Arab world and the Muslim world, and what they are determined to inflict on the entire world.

Their outrage is not directed at offenses against human rights and justice, only at offenses against Sharia, such as a woman who dares to speak her mind and a former Muslim who refuses to be silenced. In , or these are grave crimes and as Islamism becomes indistinguishable from political correctness, they are turning into crimes of thought in .

Daniel Greenfield, a Shillman Journalism Fellow at the Freedom Center, is a writer focusing on radical Islam. He is completing a book on the international challenges faces in the 21st century.

The Muslim Brotherhood is yet another Neo Nazi movement in this case hiding under the skirts of Islam. The Nazis aped the approach of radical Islam in their run for power and here we have Islamic hate mongers aping the worst Nazi behavior and applying intimidation to suppress opposition and silence critics.

Not so's you'd notice. Now if you wanted to say that the Nazis incarnated as the subverters of the Texas GOP ( including Bush, Rove, Cheney and the rest of the PNAC brigade ) and recognizing that George Busdh Sr. was openly the head of the CIA ( whose predecessor openly and secretly brought SS members to the USA post WW II ) was using intimidation techniques, one might have an orientation which would make sense of an internet Search predecated upon the terms 'MI 6 CIA Muslim Brotherhood' which would clearly indicate that the Muslim Brotherhood is just another proxy for the underground mafia to play politics.

And 'radical Islam' ? That stuff fomented by Saudi Artabia in fact fosters cult hatred of Islam by indoctrinated members of the Taleban....a U.S. supported group during the proxy war against the USSR in Afghanistan which was promoted as presenting a threat of radical Islam .
Sound familiar ?