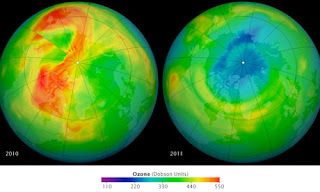 Just how much of that chlorine comes from the ocean is something I have always wondered about.  All the evidence is itself way to recent to ever exclude just that.  We no sooner began looking than we found this amazing hole and also found something to blame it on.

In the meantime we are having an apparent one time only event taking place over the .  It is a good reminder to be cautious when scientists claim victory in this battle.  The Antarctic is not the only show on Earth and watching it cool while the Arctic warms has been instructive and suggestive.

Most importantly, we simply do not know enough to evince confidence and at least this group is dodging any suggestion that this caused by us in any way as it would likely counter their tales of the past.  Perhaps the two poles are now on different planets.

Arctic and Antarctic holes of similar size for first time, say scientists, due to combination of wind patterns and intense cold

A huge hole that appeared in the Earth's protective ozone layer above the Arctic in 2011 was the largest recorded in the northern hemisphere, though the sudden appearance of the hole was not due to man-made causes, scientists said in a report on Monday.

The ozone layer high in the stratosphere acts like a giant shield against the sun's ultraviolet (UV) radiation, which can cause skin cancer and cataracts. Since the 1980s, scientists have charted the size of the ozone hole every summer above the Antarctic.

Some years, the holes have been so large that they covered the entire continent and stretched to parts of .

During extreme events, up to 70% of the ozone layer can be destroyed, before it recovers months later. The hole above the Arctic was always much smaller – until March this year, when a combination of powerful wind patterns and intense cold temperatures high up in the atmosphere created the right conditions for already-present, ozone-eating chlorine chemicals to damage the layer.

The findings, reported on Monday in the journal Nature, show that the hole had opened over northern , parts of Greenland, and , meaning people in these areas were likely to have been exposed to high levels of UV radiation.

"The chemical ozone destruction over the Arctic in early 2011 was, for the first time in the observational record, comparable to that in the Antarctic ozone hole," say the scientists, led by Gloria Manney of the Jet Propulsion Laboratory in Pasadena, California.

The scientists say man-made chemicals such as chlorofluorocarbons (CFCs) destroy ozone in the stratosphere, after sunlight breaks up the complex chemicals into simpler forms that react with ozone. While some of the chemicals are covered by a UN treaty that aims to stop their use, it will be decades before they are fully phased out of production.

Normally, atmospheric conditions high above the do not trigger a large-scale plunge in ozone levels. But during the 2010/11 winter, a high-altitude wind pattern called the polar vortex was unusually strong, leading to very cold conditions in the stratosphere that also lasted for several months. This created the right conditions for the ozone-destroying forms of chlorine to slash ozone levels over a long period.

The report's authors said there was a risk that the spread of the Arctic hole could become an annual event.
Posted by arclein at 12:01 AM