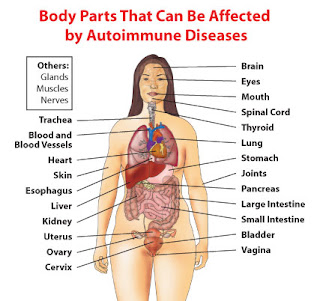 This insight conforms beautifully with the clinical presentation of such diseases and allergies also.  It is really saying that we are for some reason responding imperfectly to the food we eat.  It could well be because of prior dietary issues and even more plausibly because the diet has become way too benign.

It certainly clarifies why absurd therapies that challenge the gut often help resolve the problem.  That it is all affected by a single molecule makes the search for effective therapies rather simple.  This is a little like the discovery of the bug that produced ulcers.

This is more excellent news on the allergy front and we can expect a complete rethink of present therapies.

—Imagine a single drug that would treat most, if not all, autoimmune disorders, such as asthma, inflammatory bowel disease, and Lupus. That might not be so hard to do thanks to a team of researchers who have discovered a molecule normally used by the body to prevent unnecessary immune reactions. This molecule, pronounced "alpha v beta 6," normally keeps our immune systems from overreacting when food passes through our bodies, and it may be the key that unlocks entirely new set of treatments for autoimmune disorders. This discovery was recently published in research report appearing the Journal of Leukocyte Biology (https://www.jleukbio.org).

"Currently we do not have special methods to radically treat most immune diseases; all we can do is to temporarily inhibit the clinical symptoms for those diseases," said Ping-Chang Yang, a researcher involved in the work from the Department of Pathology and Molecular Medicine at McMaster University in Ontario, Canada. "Our findings have the potential to repair the compromised immune tolerant system so as to lead the body immune system to 'correct' the ongoing pathological conditions by itself."

Scientists made this discovery in mice when they noticed that their intestines secreted alphavbeta6, when absorbing food. Alphavbeta6, together with the absorbed food, induced the body to produce immune tolerant cells, which ensured that the food did not cause an excessive immune reaction. Researchers then generated alphavbeta6 using cultured intestinal cells and found that both could be used to generate the immune tolerant cells needed to reduce or eliminate out-of-control immune reactions.

"Development of new treatments and cures for diseases is usually a long process involving a series of incremental steps taken from the laboratory all the way through to the patient's bedside," said John Wherry, Ph.D., Deputy Editor of the Journal of Leukocyte Biology. "Occasionally, however, scientists make large leaps forward instead.

While considerable work remains to determine whether or not this discovery will directly translate into new therapies, the alphavbeta6 discovery reported by these scientists is exciting, if not stunning."