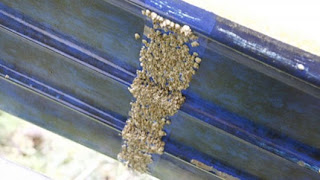 There are few problems that has faced more false alarms than the pressing search for final solution to the problem of ship fouling.  It has been pressing since the Bronze Age and I am sure a magnificent prize was offered then.

This time it sounds as if we may have a practical solution able to last between dry docking trips.  That is great news and will be welcome to seamen everywhere.

Perhaps even the oldest problems can get solved.  Perhaps it is time to tackle the n body problem.

The hull of a boat that was painted with a coating containing macrocyclic lactones, with the exception of the stripe down the middle

While the sight of barnacles on ships' hulls may seem like a very normal part of the maritime environment, the fact is that the presence of such organisms makes a vessel much less streamlined. The harder it is for a ship to slice through the water, the harder its engines have to work and the more fuel it uses. Although there are some anti-fouling coatings that can be applied to hulls, these are often toxic, and can leach into the surrounding water and harm marine organisms. Some recent efforts at eco-friendly solutions have included using fungus and seed-inspired coatings, but scientists at 's are now reporting success with the use of molecules created by a certain type of bacteria.

The molecules are known as macrocyclic lactones, and barnacles don't like them. In field tests, trace amounts of the lactones were added to a regular anti-fouling coating, which was then applied to a boat's hull - a binding agent kept the molecules from dispersing into the water. Although the barnacle larvae then colonized the hull as per usual, when they matured into adults and tried to establish a more secure hold, they lost their footing and were swept away.

Apparently, a marine species of brown algae uses the molecules in the same way, to keep barnacles from accumulating on its leaves.

The University of Gothenburg researchers believe that such coatings could completely replace more toxic copper-based coatings, and that one application should be able to repel barnacles for several seasons.

Scientists at the same institution have also been looking into using medetomidine, a veterinary medicine, for keeping larval barnacles from settling on hulls in the first place.

A paper on the macrocyclic lactone research was recently published in the journal Biofouling.
Posted by arclein at 12:01 AM