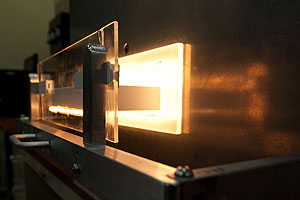 It certainly answers the question of how does one lay down a single atomic layer uniformly over a large area.

I become more hopeful by the day that we will soon live to apply the present advances in physics to the manufacture of large complex craft able to emulate the performance of UFOs.

In the meantime, these solar cells at twenty percent are sufficiently efficient to make further gains welcome but not deal breakers.  Additionally, it will certainly drop the raw cost of power under the $1.00 per watt level once and for all while using current built infrastructure to retrofit.  Add in energy storage and solar becomes highly competitive.

The cavity inside the Solar Optical Furnace glows white hot during a simulated firing of a solar cell.

Solar cells, the heart of the photovoltaic industry, must be tested for mechanical strength, oxidized, annealed, purified, diffused, etched, and layered.

Heat is an indispensable ingredient in each of those steps, and that's why large furnaces dot the assembly lines of all the solar cell manufacturers. The state of the art has been thermal or rapid-thermal-processing furnaces that use radiant or infrared heat to quickly boost the temperature of silicon wafers.

The Optical Cavity Furnace (OCF) combines the assets that photonics can bring to the process with tightly controlled engineering to maximize efficiency while minimizing heating and cooling costs.

NREL's OCF encloses an array of lamps within a highly reflective chamber to achieve a level of temperature uniformity that is unprecedented. It virtually eliminates energy loss by lining the cavity walls with super-insulating and highly reflective ceramics, and by using a complex optimal geometric design. The cavity design uses about half the energy of a conventional thermal furnace because in the OCF the wafer itself absorbs what would otherwise be energy loss. Like a microwave oven, the OCF dissipates energy only on the target, not on the container. 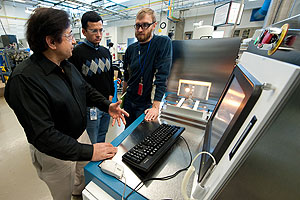 NREL researchers continue to improve the furnace and expect it to be able soon to hike the efficiency by 4 percentage points, a large leap in an industry that measures its successes a half a percentage point at a time. "Our calculations show that some material that is at 16 percent efficiency now is capable of reaching 20 percent if we take advantage of these photonic effects," NREL Principal Engineer Bhushan Sopori said. "That's huge."

At about a quarter to half the cost of a standard thermal furnace, the OCF is poised to boost the solar cell manufacturing industry in the United States by helping produce solar cells with higher quality and efficiency at a fraction of the cost.

The furnace's process times also are significantly shorter than conventional furnaces. The Optical Cavity Furnace takes only a few minutes to process a solar wafer.

NREL has cooperative research and development agreements with several of the world's largest solar-cell manufacturers, all intrigued by the OCF's potential to boost quality and lower costs.

An NREL colleague inserts a multi-crystaline silicon solar cell sample into the Optical Cavity Furnace while Principal Engineer Bhushan Sopori, gets ready to read its analysis on his computer screen.

NREL and AOS shared a 2011 R&D 100 Award for the furnace. The awards, from R&D Magazine, honor the most important technological breakthroughs of the year.

Billions of solar cells are manufactured each year. A conventional thermal furnace heats up a wafer by convection; a Rapid-Thermal-Processing furnace uses radiative heat to boost the temperature of a silicon wafer up to 1,000 degrees Celsius within several seconds.

In contrast to RTP furnaces, the Optical Cavity Furnace processing involves wafer heating at a relatively slower rate to take advantage of photonic effects. Slower heating has an added advantage of significantly lowering the power requirements and the energy loss, so it can boost efficiency while lowering costs.

"With all solar cells, optics has a big advantage because solar cells are designed to absorb light very efficiently," NREL Principal Engineer Bhushan Sopori said. "You can do a lot of things. You can heat it very fast and tailor its temperature profile so it's almost perfectly uniform."

In fact, the OCF is so uniform, with the help of the ceramic walls, that when the middle of the wafer reaches 1,000 degrees Celsius, every nook and cranny of it is between 999 and 1,001 degrees.

"The amazing thing about this is that we don't use any cooling, except some nitrogen to cool the ends of the 1-kilowatt and 2-kilowatt lamps," Sopori said. That, of course, dramatically lowers the energy requirements of the furnace.

The use of photons also allows junctions to be formed quicker and at lower temperatures.
As strives to reach the goal of 80 percent clean energy by 2035, the White House and the Department of Energy are challenging the solar industry to reach the goal of $1 per watt for installed solar systems. To reach that goal, manufacturers need better, less expensive ways to make solar cells. At $250,000, the Optical Cavity Furnace can do more, do it quicker, and do it at a lower capital cost than conventional furnaces.

For more than two decades, Sopori had great ideas for making a better furnace.

He knew that incorporating optics could produce a furnace that could heat solar cells, purify them, ease their stress, form junctions and diffuse just the right amount of dopants to make them more efficient.

"It's always easy on paper," Sopori said recently, recalling the innovations that worked well on paper and in the lab, but not so well in the real world. "There are moments … you realize that no one has ever done something like this. Hopefully it will work, but there are always doubts."

Trouble was, he'd come up with some elegant theoretical solutions involving optics, but wasn't able to combine them with the optimal geometry and materials of a furnace. "We've had a whole bunch of patents (12) to do these things, but what we were missing was an energy-efficient furnace to make it possible," Sopori said.

And then, combining his expertise in optics with some ingenious engineering with ceramics, he had his ah-ha moment:

NREL's Optical Cavity Furnace uses visible and infrared light to uniformly heat crystalline silicon wafers, especially at the edges, which are prone to cooling or heat loss, at unprecedented precision. The rays heat the sample, but the wafer never physically contacts the lamps.

The Optical Cavity Furnace is versatile. Each step in the solar cell manufacturing process typically requires a different furnace configuration and temperature profile. However, with the OCF, a solar cell manufacturer simply tells a computer (using NREL proprietary software) what temperature profile is necessary for processing a solar cell.
So, the OCF can perform five different process steps without the retooling and reconfiguration required by the furnaces used today, all the while incrementally improving the sunlight-to-electricity conversion efficiency of each solar cell.

When light is shined on silicon atoms that are bonded electronically to each other it changes their potential. The work by Bhushan Sopori and his colleagues ensures that that change is for the better.

The Optical Cavity Furnace shines visible and near-infrared light to heat the solar cell, and also shines ultraviolet light to take advantage of photonic effects that occur deep within the atomic structure of the cell material. This combination offers unique capabilities that lead to improved device quality and efficiency.

Iron and other impurities can degrade the silicon quality quickly, noted Sopori, the principal investigator for the Optical Cavity Furnace (OCF), developed by the U.S. Department of Energy's National Renewable Energy Laboratory and its private industry partner AOS Inc. "But shining the right light on it can remove that impurity from the silicon," Sopori said. "We've shown that it is possible with the photonic effects to getter these impurities during solar cell fabrication."

Optics can make a lot of things happen at the interfaces in a cell, where, for example, metal can reflect the light and speed the diffusion of impurities, Sopori said.

The lamps in the furnace help fool the impurities in the silicon into moving out of the way, by creating vacancies.

"We call it injecting vacancies," Sopori said. A vacancy is a lack of a silicon atom. "If the atom is missing, you have a vacancy here, an empty space." Those spaces prompt the impurities such as iron to feel much more like moving – and they do so at a much lower temperature than would otherwise be required. The iron moves in with the aluminum, creating an aluminum-iron mix that, happily, is needed anyway as a contact point.

Removing impurities can change a cell's efficiency from 13 percent to 17 percent. What that means is that 17 percent of the photons that hit the improved cell are converted into usable electricity.

The absence of cooling water and confinement of energy in the OCF proves to be a big advantage for lowering the energy payback time of solar cells.

Other advantages of the photonic approach:

Silicon cells often have silver contacts in front and aluminum contacts in back. They usually are fired simultaneously as the cell is being formed. The OCF by selectively heating the interfaces of silicon and metal can better control the process, and thus create stronger field surfaces and improved cell performance.

The Optical Cavity Furnace uses photons of light to remove weak, cracked wafers from the processing line. Photons can more easily produce a thermal stress in a wafer and screen out bad wafers. The photon process tests the wafers' integrity right after they are cut. The conventional method requires physical twisting and bending of the wafers to test for weakness.

Central heating systems are easily the most cost-effective form of heating for any home.