BYD E6 All Electric on Sale in China 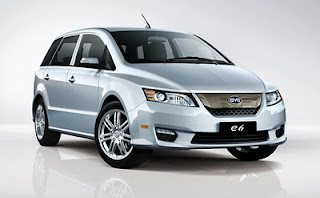 Here it is folks.  It is not all we want yet, but it is certainly good enough for three hours of driving and that makes it good to go for all metropolitan driving for just about every possible consumer.

Cost and range are sufficient to replace our present auto fleet now.  Every manufacturer is now racing to match this performance.  In the meantime they are beginning large scale deliveries and it is now a given that next year marks the beginning of the outright conversion to electric cars.  It will also be very swift as no one will want to be left with an unsalable used gas burner.  I suspect it will pass the fifty percent mark in terms of new sales inside two years.

A lot of additional breakthroughs are in the pipeline and the matured electric will actually be an awesome device.  Maturity will still take a good decade even at the present high pace of development and implementation.

The E6, which has a range of 300 kilometers (188 miles) per charge, has a sticker price of 369,800 yuan ($58,200), BYD said today in Shenzhen, where it is based. Buyers in the southern Chinese city will qualify for as much as 120,000 yuan in subsidies, according to Li Ganming, a deputy director of the National Development and Reform Commission’s Shenzhen branch.
BYD will start selling its battery-electric buses and sedans to fleets in the U.S. in the fourth quarter of 2011. A BYD electric bus is currently on a demonstration tour of the to show off the technology. Sales to consumers of the e6 crossover will start in the in the second quarter of 2012. The BYD vehicles have passed all the necessary safety tests for the market.

Wikipedia -The 40 demonstration vehicles that began operating as taxis in Shenzhen, China, have a range of 300 km (186 mi), a maximum speed of 140 km/h (87 mph), and consume 21.5 kWh per 100 km. In August 2011, BYD clarified that the e6 has a range of 230 to 240 kilometres (140 to 150 mi) under more demanding conditions, such as running the air conditioning or driving up hill. In more favorable conditions, such as city driving, with lots of stop and go, the range goes up to 290 to 320 kilometres (180 to 200 miles). In January 2011 BYD announced that in response to U.S. consumers preferences, the American version will be more powerful than the Chinese version, and it will have a 60 kWh battery pack with a 160 kW electric motor, capable of reaching 0 to 60 mph in less than 8 seconds


BYD’s "Fe" lithium iron phosphate battery, which powers the e6, represents one of the company’s core technologies. All chemical substances used in the battery can be recycled.
aims to have 1 million electric-powered vehicles on ’s roads by 2015, according to the Ministry of Science and Technology. The world’s largest automobile market had more than 10,000 energy-saving and alternative-energy powered vehicles running in 25 trial cities as of July