This would make a real mess if it were to ever impact the surface.  Fortunately they seem to appear every couple of decades or so and thus remain relatively rare, at least in terms of a human lifespan.

A couple of decades from now we will have the capacity to disturb these orbits and simply put them out of harms way forever.  After all, a close encounter is still too close to leave alone forever.

It is noteworthy that in roughly several thousands of years of recorded history, we have never had a major impact, yet this suggests that close encounters approach a couple of hundred passes.

It is not likely to be a rough as when it comes but the damage would be horrific.  We really need to scour Earth for previous impacts from objects of this size.  They are all buried and difficult to spot, but I suspect that a lot more exist than anyone ever imagined.

Huge Asteroid to Creep Near Earth on Nov. 8

In April 2010, this radar image of the near-Earth asteroid 2005 YU55 was taken by the radio telescope in . On Nov. 8, 2011, this large space rock zips by Earth again and will be surveyed by radar, visual and infrared equipment.
CREDIT: NASA/Cornell/Arecibo

Mark Nov. 8 on your calendar. A huge asteroid that could potentially threaten Earth in the far future will pass close by as astronomers around the world watch and measure.

This space rock is asteroid 2005 YU55, a veritable mini-world roughly 1,300 feet (400 meters) wide — nearly four football fields across — that will zoom by Earth inside the orbit of the moon.

Asteroid 2005 YU55 is set to become the object du jour for ground observers. An extensive campaign of radar, visual and infrared observations is being staged to survey this cosmic interloper.

Due to its size and proximity, YU55 was classified as a "Potentially Hazardous Asteroid" several years ago. Its upcoming flyby is another wake-up call — an express mail reminder that humanity resides on a sitting duck of a planet.

Asteroid 2005 YU55's pass by Earth will be closest to date by an object this large that we know about in advance. A smaller asteroid, called 2011 CQ1, actually came closer to Earth without hitting – a record-setting approach to within 3,400 miles (5,471 kilometers) — but it was not seen in advance.

The asteroid's near-Earth flyby is also the first since 1976 that astronomers have known about in advance for such a large object. The next known flyby with a big space rock will occur in 2028, NASA scientists said. 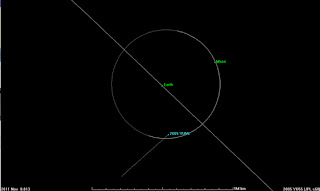 This still from a NASA animation by Jon Giorgini of the Jet Propulsion Laboratory shows the trajectory of asteroid 2005 YU55 as it passes between Earth and the moon on Nov. 8, 2011.
Rare cosmic event

A close pass by a near-Earth object (NEO) the size of asteroid 2005 YU55 is a fairly rare event, thankfully (because of the impact possibility), something that occurs perhaps once every 25 years or so, said Lindley Johnson, NASA's NEO Observations program executive in the agency's Planetary Science division in Washington.

"But this is the first time we've known about one this size in advance, due to the work of our NEO program over the last 12 years. Object 2005 YU55 was found in December 2005, so we've had almost six years of advance notice," Johnson told SPACE.com.

Normally, the NEO research community would have the chance to examine an object the size of YU55 only by sending out a spacecraft to fly by it, Johnson said. But in this case, Mother Nature has arranged the close approach, providing an opportunity to use all the ground-based instrumentation known to humankind.

"We expect to get not only detailed radar imagery on its size, shape and spin dynamics, but also high-resolution spectroscopic data to better determine its composition. This close examination will then allow us to make better estimates of the nature of other NEOs that look similar to YU55 from a remote distance — potentially some that could make good destinations for human spaceflight in the future," Johnson said.

At the ready will be ground-based optical and near-infrared equipment, as well as high-powered radar. In total, Yeomans said, these observations should paint a fairly complete picture of a large, potentially hazardous asteroid.

In the radar scanning department, the powerful Goldstone Observatory radio dishes in Mojave, Calif., that are part of NASA's Deep Space Network will be deployed, as will the huge Arecibo Observatory in Puerto Rico.

"Goldstone will begin observations on Nov. 4 and on Nov. 8. Goldstone hopes to get 2- meter resolution from the resulting shape model  –  which is quite remarkable and comparable, or better than, what would be expected from spacecraft flyby imaging," Yeomans told SPACE.com.

Furthermore, there are near-infrared observations campaigns planned, such as use of the NASA Infrared Telescope Facility located at the summit of .

"Plans are coming together well for radar observations of 2005 YU55," said Lance Benner, a research scientist at JPL and a specialist on radar imaging of near-Earth objects.

Due to the outstanding scientific potential presented by this event, Benner said, the Goldstone dishes,Arecibo in Puerto Rico, the Very Long Baseline Array (VLBA) network of radio telescopes, and the Green Bank Telescope in are to be utilized.

"It's a truly extraordinary flyby that we hope will reveal considerably more information than we currently have about this 400-meter-sized, round, dark and mysterious little world," Benner noted.

Benner reported in a background document that asteroid YU55 will move 17 moon widths per hour, or about 0.3 lunar diameters per minute. Motion this rapid will easily be observable in small telescopes with apertures of roughly 15 centimeters and larger.
2005 YU55 will approach Earth from the direction of the sun, so it won’t be visible at night until Nov. 8, Benner said. Afterward, it will move directly away from Earth, approximately 180 degrees from its approach trajectory.

Most work at the observatory is dedicated to the determination of asteroid light curves, with some variable stars and astrometry mixed in from time to time.

Warner is heading a campaign of largely backyard astronomers to observe 2005 YU55. The amateurs are equipped with 0.2- to 0.5-meter telescopes and higher-end commercial CCD cameras; those who are participating have some background in asteroid photometry.

"However, YU55 will be a challenge even to the most experienced photometrist," Warner said. "When at its closest, it will be moving upwards of 10 degrees per hour. This should make its motion easily visible to telescopic visual observers. For photometry, keeping the signal strong enough without excessive trailing will require very short exposures and frequently readjusting the field to keep the asteroid in frame."

Warner told SPACE.com that a couple of days after the asteroid's closest approach, the space rock's sky motion will diminish considerably. It will still be relatively bright, he said, so the campaign can probably continue for three to five days after Nov. 8.
One nifty thing that could come out of the photometry campaign is evidence of a spin state change of YU55 from the tug of our planet's gravity field.

There have been a number of flybys in recent years, all generating considerable general interest, and a number of YouTube videos showing the asteroid's rapid sky motion, Warner said.

"In this case, the goal is to get some of those who observe the asteroid to use their images for science," he added. "There are a number of ways their data can and will be put to use."

Leonard David has been reporting on the space industry for more than five decades. He is a winner of this year's National Space Club Press Award and a past editor-in-chief of the National Space Society's Ad Astra and Space World magazines. He has written for SPACE.com since 1999.