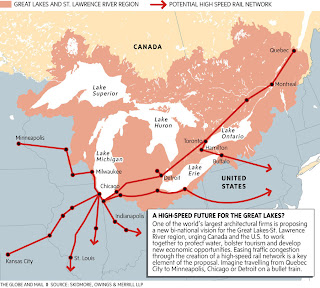 What caught my eye was the limited extent of the great lakes watershed itself and particularly as expressed in the .  The exception there is .   This actually means that the two dominant polities are just two and that is and .   Actually accomplishing something is actually much easier than I thought.  Every other state has an interest but not a dominant one.

Agriculturally, the interest is somewhat narrower but the basic pattern holds true.

The important consideration that needs to be addressed is how to optimize this huge watershed.  For the present, it has all been by reaction as one fresh invader after another rips through the environment.  This has been a source of consternation for two centuries.

My own experience informs me that riverine restoration and outright management and direct commercial exploitation needs to be fully integrated with all stakeholders.  I grew up there and have posted many suggestions.  The rivers need to be forested properly and not just in some ill planned imposed system either.  The edges need to be made impervious to large herbivores.  I have suggested a forest edge composed of staggered hawthorns and a verge amply seeded with chamomile to protect crop land.

Thereafter the woodlands themselves need to be actively managed and the the rivers themselves will quickly restore their working banks and be a natural host to an active spawning environment supporting a huge fishery.

All that remains is to control industrial pollution properly so that it might be possible to eat the product of that fishery.

From Friday's Globe and Mail

A architectural firm best known for creating some of the tallest skyscrapers in the world has turned its creative eye to the , advocating for a new economic and environmental vision that spans borders.

The bi-national blueprint from Chicago-based Skidmore, Owings and Merrill is still in its infancy, but the concept has garnered support from several mayors in and the . The proposal calls on the two nations to re-imagine the Great Lakes and St. Lawrence River region as a shared space, where Canadians and Americans work together to protect waterways, ease traffic congestion, promote tourism and develop new economic ventures.

The bi-national vision, presented this week at a global green-building conference in , isn’t so far-fetched. The Brookings Institution in and Mowat Centre in have been studying the idea, consulting 250 business, government and community leaders. The public-policy think tanks will present their regional blueprint at an international Great Lakes water-quality meeting in next week.

Genesis of a vision

At first blush, the pairing of the and an architectural company seems odd. Skidmore, Owings and Merrill has built a global design empire with such towering wonders as the iconic John Hancock Center and Sears Tower in Chicago and downtown Dubai’s spiralling Burj Khalifa, which, at 828 metres, is the tallest building on the planet.
But when the firm was asked to draft a vision to mark the centennial of the 1909 Burnham Plan that helped shape Chicago, Mr. Enquist, who’s done regional planning in China and Bahrain, began wondering why there wasn’t a holistic strategy for the Great Lakes and St. Lawrence River area.

And so Skidmore, Owings and Merrill began envisioning an environmental and economic plan.

The region is massive, encompassing , and eight states. It contains about 84 per cent of ’s fresh water and almost 18,000 kilometres of lake frontage. Nearly a third of Canadians and about a tenth of Americans live here, in more than 15,000 towns and cities.

The National Parks Conservation Association, a U.S. advocacy group, and the Great Lakes and St. Lawrence Cities Initiative, which includes about 80 mayors from both sides of the border, have joined the push for a bi-national strategy. The proposal urges greater collaboration to improve water quality and conservation. The plan also calls for the designation of a Great Lakes international park, which would increase the region’s cachet, said Lynn McClure, a regional director with the parks group.

Unlike provinces and states in the Pacific Northwest that forged formal economic and political alliances two decades ago, the Great Lakes-St. region doesn’t have an entrenched culture of co-operation, observes Josh Hjartarson, policy director at Mowat Centre. Rather, the jurisdictions are more accustomed to competing for tourists, manufacturers and other economic opportunities.

But with the manufacturing sector waning in many parts of the and glum forecasts of a deepening economic downturn, Mr. Hjartarson says the region should forge closer ties to capitalize on its assets. Those would include top-notch educational institutions, a wealth of corporate head offices and a population of 105 million people. New industries could be created through stronger co-operation. Mr. Enquist, the urban designer, points to renewable energy and green technology as possible opportunities for the region.

mayor Eddie Francis supports crafting a bi-national strategy for the area, but notes the central challenge will be mustering the necessary political will. With so many players and levels of government involved, striking a consensus won’t be easy. The vision needs a powerful political champion, Mr. Francis said.

“Given the economic crisis that’s taken place, I think there’s a sense of urgency that’s being developed to try and get this group to work together,” added the Windsor mayor, whose city has grappled with the decline of auto manufacturing.

“The region has an ability to compete. It’s either we work together or lose together,” he said.
Posted by arclein at 12:02 AM