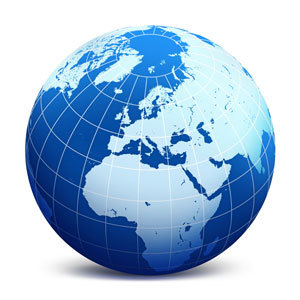 I do not buy much of this because it misses the major point that our technology will make longetivity the new norm long before 2050.  This will then lead to a shift of human resources back to the land and a natural deurbanisation that takes the services of the city back to the farm.  It is already beginning to happen although the momentum is still the other way.

Africa is about to sprint into the modern world and birth rates are already dropping and the population should ultimately match that of and .

After that human expansion is likely to be much more benign and aimed at optimizing water sheds globally while allowing the natural world to fully adjust.

Recall that the long history of land tenure everywhere has seriously created large inefficiencies everywhere.  Connecting green belts, building effective boundaries and optimizing crop production will take decades throughout the globe.  In that emergent environment, natural wild populations will also have to be optimized and clearly managed.  They are already steadily recovering because the pressure of hunting is steadily subsiding.

Ways the world will change radically this century

In terms of evolution, the species Homo sapiens is extremely successful. The populations of other species that are positioned similar to us on the food chain tend to max out at about 20 million. We, by contrast, took just 120,000 years to achieve our first billion members, and then needed only another 206 years to add 6 billion more. According to the United Nations Population Division, our population will hit 7 billion on Oct. 31, and though fertility rates have begun to decline across much of the globe, we're still projected to reach 9 billion by mid-century and level off at around 10 billion by 2100.

A panel of academics met at Columbia University's Earth Institute on Monday (Oct. 17) to discuss the impacts of the human population explosion, including the ways in which it will change the face of the Earth this century. Here are five striking changes you — or your kids or grandkids — can expect to see.

Currently, it's a well-known fact that is the most populous country in the world, and that , though riddled with problems, is not necessarily overpopulated considering its size. These facts will drastically change. 's one-child policy has significantly curbed its growth, while in some African countries, the average woman gives birth to more than 7 children. [How Many People Can Earth Support?]

Jean-Marie Guehenno, former UN Under-Secretary General for Peacekeeping Operations and director of the Center for International Conflict Resolution at Columbia University's School of International and Public Affairs, said the migration of people from Africa to Europe will present a major challenge in the near future. "You can look at it as an enormous potential from a European standpoint … or you can say, '[] is a continent that still has 15 percent that are not going to school,' and that can be seen as a threat," Guehenno said. "How are you going to manage that immigration so that this aging continent of benefits from it while managing it? That is going to be a huge question."

Of course, new cities don't tend to get constructed; instead, cities that already exist tend to balloon. Guehenno argues that megacities become chaotic. "Urbanization is going to change the face of conflict in a big way. When you live in small towns and rural areas, there are all sorts of traditional conflict- resolution mechanisms. They are not all nice, but they create a sort of stable equilibrium," he said. "With the megacities that you see now in Africa, such as () and (), we see cities where the dynamics are no more under control or have been lost. We are, I think, heading toward new types of conflicts — urban conflicts — and we haven't really thought through the implications of that."

Not only has the human population exploded in the past two centuries, but the per-person consumption of resources — especially in industrialized nations — has grown exponentially. Scientists think that resource shortages will cause an escalation of conflicts during this century, and will widen the gulf between the rich and the poor — the haves and the have-nots.

No resource is more precious and vital than water, and, according to economist Jeffrey Sachs, director of the Earth Institute at Columbia, there are already parts of the world that, because of the rapidly changing climate, are at a severe crisis point. "Take the Horn of Africa for example: 's population has risen roughly fivefold since the middle of the 20th century," Sachs said. "Precipitation is down roughly 25 percent over the last quarter century. There's a devastating famine under way right now after two years of complete failure of rains, and [there is] the potential that this is entering a period of long-term climate change."

Conflicts over water shortages will probably play out as class warfare, said Upmanu Lall, director of the . "Wealth inequality tends to grow as a country's population grows, and this is a very important point to note because per capita consumption of resources has been increasing dramatically. Couple that with inequity in income and couple that with [the issue of] the availability of water," Lall said. [How Much Water Is On Earth?]

When you add it all up, you get this dire picture: As the population grows, there is less water per person. Meanwhile, the gap between the rich and the poor widens, and the rich demand more resources to accommodate their lifestyles. Inevitably, they will commandeer the water and other resources of the poor. In all likelihood, Lall said, this will lead to challenges, and perhaps class conflict.

Currently, there isn't enough energy being extracted from known sources of fossil fuels to sustain 10 billion people. This means that humans will be forced to turn to a new energy source before the end of the century. However, it's a mystery what that new source will be.

"Energy is the basic resource which underlies every other," said Klaus Lackner, director of the for Sustainable Energy. "And actually, technology is not quite ready to solve the [energy] problem. We know there's plenty of energy in solar, in nuclear, in carbon itself — in fossil carbon — for probably 100 or 200 years (if we are willing to clean up after ourselves and pay the extra to make that happen). But none of these technologies are quite ready. Solar has its problems and is still too expensive."

Carbon storage — a technology that prevents carbon dioxide and other greenhouse gases from escaping into the atmosphere when fossil fuels are burned — is still on the drawing board, though it looks possible, he added. "And lastly, nuclear energy: if we were betting on that, we may have just lost that one," Lackner said, referring to the nuclear disaster in , earlier this year.

"Let me just give you a feeling how big today our energy consumption is: In , the energy consumption exceeds the photosynthetic productivity of the same area if it were left pristine," Lackner said. "We have to have technology help us out. I am optimistic … that the technologies can be developed to solve these problems … but I am a pessimist because we lack the societal structures which would enable us to employ these technologies, and we could very well fall on our own faces."

In short, the future will match one of these two pictures: Either some new, superior form of energy extraction (such as highly efficient solar panels) will be widespread, or the technology, or its implementation, will fail, and humanity will face a major energy crisis.
Mass extinctions

As humans spread, we leave scant room or resources for other species. "There is good evidence that we are in the sixth massive species extinction of the history of the planet, because of the incredible amount of primary production that we take as a species to maintain 7 billion of us," Sachs said.

Aside from the lack of land and resources left for other species, we've also caused rapid changes to the global climate, with which many of them cannot cope. Some biologists believe that with the current rate of extinction, 75 percent of the planet's species will disappear within the next 300 to 2,000 years. These disappearances have already begun, and extinction events will become more and more common over the course of the century. [10 Species Our Population Explosion Will Likely Kill Off]
Posted by arclein at 12:01 AM