The Aztecs With Michael E. Smith 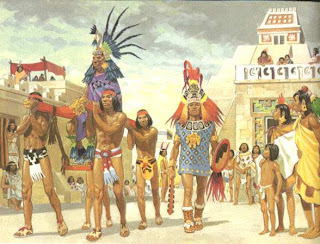 I have finished a book titled The Aztecs by Michael E. Smith which is well worth the effort.  It is informed by recent archeological work, which has filled in the blanks of their daily lives and was long overdue.  The same tiresome rehashes of the early reports after the conquest were obviously misleading and in need of proper balance.

We learn of a well ordered society well supplied by trade and actively protecting that trade.  It was nicely monetized by the cacao bean.  Slavery was present but in much the same form as we see in roman tracts.

The cultural anomaly was the use of human sacrifice.  The charge of cannibalism is reduced to a small ritual meal using the body provided by the citizen who provided the slave.  Even that may have not been true at all.  What was true was the horrific public display of the sacrificial act that surely echoed the ancient practices  of Bronze Age Mediterranean and .

We have already posted extensively on the emergence of Atlantean culture some five thousand years ago on the cusp of the emergence of metal working.  We have placed the complex from that era about a thousand years before what is generally accepted.  This culture was seaborne and could well have inspired similar cultures world wide.  What has been difficult to discern is the earlier remnants that are certainly there but are also buried under the process of constant rebuilding with a stable system.  After all just what can we prove about early English civilization in the center of ?

What the Aztecs make clear is that an active trading culture can be organized and built using traditional political structures and outright stone age technology as long as there is a way to produce ample food in the form of a storable grain.  We see here the shape of ancient Sumerian culture and many others over the millennia displayed to us in as close to real time as we will ever get.

What is startling is just how well ordered the society is.  Failure in life reduced you to slavery but otherwise most lived under obligations to their lord and state through a command pyramid completely similar to the Egyptian system.  There is no sign here that the top lord was ever deified.

The benefits of civilization were fully available and that is a profound lesson and why it arose over and over.
Posted by arclein at 12:01 AM

There is also a hypothesis that the stratified, bloodthirsty society led large minorities to ally with the invading Spanish in the early 1500s. So it appeared stable, but at the first push from outside, the empire crumbled. (In that respect, not unlike China in the 1800s.)