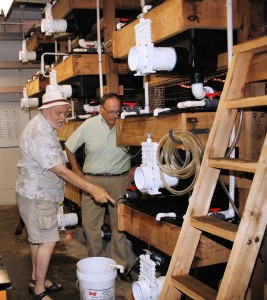 This is welcome news.  Even more welcome is that the process conserves water.  It appears to barely waste any at all.  Thus a growing operation can be placed directly near or even in a large urban centre.  This makes it easy to supply fresh shrimp directly to the market which has rarely been possible before.  You really had to go fishing and pop them fresh.

Since shrimp food consists of phytoplankton and artificial substitutes, there is no particular pressure on external food chains.

In the first plant most of a million pounds will be produced each year on 70,000 square feet.  I suspect that building up is even an option here.

I expect that we will all see local facilities been built inside the next decade to supply our local market and I expect we will soon see cheap fresh shrimp become almost a staple in our diets.  This will also eliminate the frozen shrimp export market simply because of quality differences.

Another aside is that this particular protocol is effectively unlimited in its ability to supply human populations with high quality protein.  I cannot say that about any form of animal husbandry and many other forms of agriculture.  It is even suitable for space habitats and colonies on Mars.

New shrimp technology could speed up race to feed the world

PORT ARANSAS —  They may look like bunk beds on steroids, but a new shrimp production technology developed by a AgriLife Research scientist near promises to revolutionize how shrimp make it to our tables.

The patent-pending technology, known as super-intensive stacked raceways, was created by Dr. Addison Lawrence at the AgriLife Research Mariculture Laboratory at Port Aransas, who says the system is able to produce record-setting amounts of shrimp.

“We’re able to produce jumbo size shrimp, each weighing 1.1 ounces, known as U15 shrimp, which gives us world record production of up to 25 kilograms of shrimp per cubic meter of water using either zero water exchange and/or recirculating water,” he said.

At this rate of production, said commercial shrimp producers will have the potential to vastly increase their profit margins.

A world-wide license for the new technology has been awarded to Royal Caridea, headed by Dr. Maurice Kemp, president. Sub-licenses are being considered for other countries, including , , , , , People’s Republic of , , and .

is convinced the indoor system will decrease this country’s dependence on foreign shrimp and could even help alleviate world hunger.

“Order a plate of shrimp at any U.S. restaurant, even along the coast, and chances are you’ll be served shrimp farmed in Southeast Asia and frozen two to four times before it got to your table,” Lawrence said. “That’s because the imports about 90 percent of the shrimp it consumes, with a value of about $4 billion annually.”

In addition to contributing to a foreign trade deficit, imported shrimp also bring with them environmental and quality control issues, he said.

“They are grown in open ponds and treated sometimes with antibiotics banned in this country, creating a negative impact on wetlands and human consumption,” said. “About 90 percent of sea life in the world spends some portion of their life in the wetlands, thus making wetlands essential for the sustainability of food from the oceans. Uncontrolled use of antibiotics creates its own problems for the wetlands and consumers.

But because Thailand, India, Vietnam and other countries in the tropics can grow two or three crops of shrimp per year compared to just one crop in the U.S., it’s hard to compete.”

A prototype of the new system has been constructed in a darkened room just feet from its creator’s office. The shrimp grow in four columns of raceways stacked four high. These raceways are long tubs with circulating water of only 5- to 7-inches average depth. As the shrimp develop, they are transferred to a raceway below. Baby shrimp are added to the top raceway, while the more mature shrimp in the lower raceways are harvested.

“Simplicity is the key here,” said . “Some of history’s most creative, innovative inventions are based on very simple logic. Keep it simple.”

But the results of these simple tanks — the amount of shrimp that can be harvested — are astounding, said.

Developing the stacked raceway system is the culmination of ’s 50-year career in aquaculture, he said. Along the way he’s developed various components of the new system, including the patent-pending feed (co-inventor) for growing the shrimp, the closed water system using zero exchange and recirculating, a unique raceway bottom design and aeration system and other technologies.

The vision for his creation includes stacked raceway facilities near major metropolitan areas throughout the country, producing live, fresh, never-frozen or fresh-frozen shrimp to be available every day of the year.

“Most Americans have never tasted fresh shrimp,” he said. “There is a huge demand for high-quality shrimp. At a nearby IGA supermarket, we test-marketed shrimp produced in these raceways and they sold out in a matter of hours. They would surely bring premium prices at supermarkets and restaurants in , , and other large cities. But more importantly, these systems could provide the protein that a booming world population desperately needs.”

said that the world’s population is expected to increase significantly in the next 20 to 30 years.

“Where will the necessary protein come from?” he asked. “The only way to feed the world, I think, is with aquaculture. We can’t catch more fish or shrimp; we’re at a maximum sustained yield, so these systems would not compete with fishermen.”

The world’s first commercial application of ’s stacked raceways will break ground just miles from his office in Port Aransas, according to Kemp. His company will own and operate the project.

“We’ll construct a facility of about 70,000 square feet, hire 15 to 20 people, some of them with advanced degrees, and produce shrimp year-round. We expect to produce some 835,000 pounds of shrimp per year,” he said.

“Also of significance is that this technology will allow shrimp farms to be built inland in proximity to major metropolitan areas and provide live, fresh-dead and fresh-frozen shrimp on a daily basis,” Kemp added.

Lawrence said based on high growth rates and high survival and production levels, economic data shows an estimated rate of return of 25 percent to 60 percent.

“There are no disease problems; it’s biosecure. So, with predictable high internal rates of return, the system is economically viable. But the best part is, it’s totally organic with high-quality protein available every day of the year.”