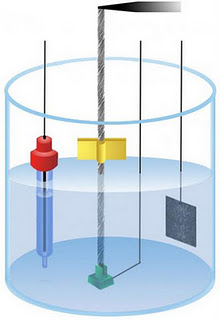 This is extremely exciting.  We now have a system able to provide artificial muscles that are hugely superior to anything else produced to date.  It is now easy to imagine the manufacture of such muscle driven devices as robots that actually look animal like to say nothing of providing prosthetics that have a real muscle like structure.

I have long posted on the promise of nanotubes for providing long cables for construction even to the extent of providing a satellite to earth sky tether.  If we can do that it is pretty obvious that our bridge spans will also become remarkably longer.  In fact the real technical limit in bridge construction may now be the compression strength of the best concrete.

That we can now design complex dynamic structure able to rapidly contract and rotate and all that opens a huge design door.  In fact how about simple doors?  They just became much easier.

How about a glove able to augment all hand operations including grip?  Imagine been able to crush a stone in your hand?  This is no longer an unrealistic objective.

Researchers announced new artificial muscles that twist like the trunk of an elephant, but provide a thousand times higher rotation per length.

These muscles, based on carbon nanotubes yarns, accelerate a 2000 times heavier paddle up to 590 revolutions per minute in 1.2 seconds, and then reverse this rotation when the applied voltage is changed. The demonstrated rotation of 250 per millimeter of muscle length is over a thousand times that of previous artificial muscles, which are based on ferroelectrics, shape memory alloys, or conducting organic polymers. The output power per yarn weight is comparable to that for large electric motors, and the weight-normalized performance of these conventional electric motors severely degrades when they are downsized to millimeter scale.

These muscles exploit strong, tough, highly flexible yarns of carbon nanotubes, which consist of nanoscale cylinders of carbon that are ten thousand times smaller in diameter than a human hair. Important for success, these nanotubes are spun into helical yarns, which means that they have left and right handed versions (like our hands), depending upon the direction of rotation during twisting the nanotubes to make yarn. Rotation is torsional, meaning that twist occurs in one direction until a limiting rotation results, and then rotation can be reversed by changing the applied voltage. Left and right hand yarns rotate in opposite directions when electrically charged, but in both cases the effect of charging is to partially untwist the yarn.

This is an illustration of an electrolyte-filled electrochemical cell used for characterizing torsional and tensile actuation for a carbon nanotube muscle, where the optional reference electrode, the actuating nanotube yarn electrode, and the counter electrode are from left to right. Torsional actuation rotates the paddle attached to the nanotube yarn. Credit: Image courtesy of the of at

Scientists have created an artificial muscle fibre that can twist at high speeds in both directions along its axis while carrying a heavy load. The torsional micromotor, based on spun threads of multiwalled carbon nanotubes, could be used for pumping or mixing fluids in microfluidic lab on-a-chip devices, the researchers suggest, or could be used as a propulsion system for microscopic robots.

Unlike conventional motors, whose complexity makes them difficult to miniaturize, the torsional carbon nanotube muscles are simple to inexpensively construct in either very long or millimeter lengths. The nanotube torsional motors consist of a yarn electrode and a counter-electrode, which are immersed in an ionically conducting liquid. A low voltage battery can serve as the power source, which enables electrochemical charge and discharge of the yarn to provide torsional rotation in opposite directions. In the simplest case, the researchers attach a paddle to the nanotube yarn, which enables torsional rotation to do useful work – like mixing liquids on "micro-fluidic chips" used for chemical analysis and sensing.


The mechanism of torsional rotation is remarkable. Charging the nanotube yarns is like charging a supercapacitor - ions migrate into the yarns to electrostatically balance the electronic charge electrically injected onto the nanotubes. Although the yarns are porous, this influx of ions causes the yarn to increase volume, shrink in length by up to a percent, and torsionally rotate. This surprising shrinkage in yarn length as its volume increases is explained by the yarn's helical structure, which is similar in structure to finger cuff toys that trap a child's fingers when elongated, but frees them when shortened.


Nature has used torsional rotation based on helically wound muscles for hundreds of millions of years, and exploits this action for such tasks as twisting the trunks of elephants and octopus limbs. In these natural appendages, helically wound muscle fibers cause rotation by contracting against an essentially incompressible, bone-less core. On the other hand, the helically wound carbon nanotubes in the nanotube yarns are undergoing little change in length, but are instead causing the volume of liquid electrolyte within the porous yarn to increase during electrochemical charging, so that torsional rotation occurs.


The combination of mechanical simplicity, giant torsional rotations, high rotation rates, and micron-size yarn diameters are attractive for applications, such as microfluidic pumps, valve drives, and mixers. In a fluidic mixer demonstrated by the researchers, a 15 micron diameter yarn rotated a 200 times larger radius and 80 times heavier paddle in flowing liquids at up to one rotation per second.


"The discovery, characterization, and understanding of these high performance torsional motors shows the power of international collaborations", said Ray H. Baughman, a corresponding author of the author of the Science article and Robert A. Welch Professor of Chemistry and director of The University of Texas at Dallas Alan G. MacDiarmid NanoTech Institute. "Researchers from four universities in three different continents that were born in eight different countries made critically important contributions."