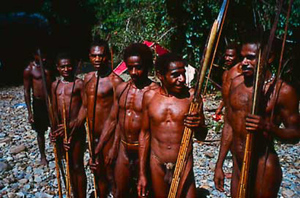 Every once in a while I revisit the topic of cannibalism.  It is controversial and opinions range from blind acceptance of its reality to outright rejection of any such behavior as by Aren back in 1980 when he did a study of what passed for evidence and soon found it outright missing or at best scant.  The situation has not obviously improved much since although I do hope the academics are now circumspect before they make such claims.

I recently reread Aren’s work to refresh my knowledge of his arguments.   I find it an excellent anecdote to the occasional items I come across.

I recently took the trouble the work through the primitive economy of cannibalism.  The results are actually surprising.

First a primitive self sufficient tribe generally had a population of somewhat less than two hundred.  The natural limit is likely around 150 or so based on the capacity of the leaders to manage and relate to all the members of the tribe.

This generally meant that the tribe had around twenty women at least who were capable of bearing children.  Significantly this occurred every three years or so.  Thus the input of new mouths would be around seven per year of which perhaps four would be males.

Assuming surplus males and sometimes surplus females would supply the stock for consumption, we have possibly four candidates available every year at most.  We can play with these numbers a little, but it cannot be much different.  This is hardly a steady source of protein for a tribe of 150.  For that reason we can dismiss cannibalism as a normal source of protein.

In fact, at best it is the feast day turkey held once a year or so.  This insight allows us to make further progress.

Such tribes warred with each other and lost members through death and capture.  These wars were rare enough to ensure that dealing with the results was an uncommon event, perhaps every couple of years or so.  It is also the most plausible way in which a tribe would find itself in possession of a few captives to whom they had no allegiance.

That gives us the next issue.  It makes perfect sense to execute such prisoners, provided no alternative option exists such as internal slavery or outright sale as a slave.  In primitive societies without either outlet, execution is obvious and well reported in the historical record as was retention as a slave.  With those considerations cannibalism was necessarily an unusual option needing a special milieu to enact.

In terms of the remaining tales, isolated tribes not participating in the slave trade appear plausible candidates as does the ritual slaughter of captured enemies that could have supported occasional cannibalism in the case of the oft maligned Aztec.  Thus while every tribe has been accused of cannibalism we soon are down to one or two plausible prospects.  They turn out to be not very good also.

The reality is that from primitive tribal economics onward, cannibalism could only sustain an occasional ritual feast.  This make the plausibility and possibility of the practice extremely low except as a rare survival maneuver.  Unfortunately, it all still makes a good read.
Posted by arclein at 12:01 AM