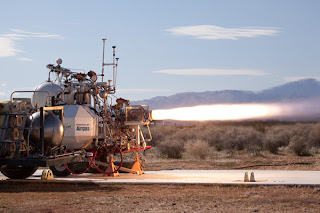 Time for an update on the progress around the XCOR.   This puts the company firmly into the engine development business with the resources to build out hugely improved engines for the aerospace industry.  Check previous posts to see the past demonstrations. (google XCOR on this site.

We can expect to see a line of engines with different power ratings come quickly although they are surely waiting for a shoe to drop somewhere. It appears to this outsider to be going wonderfully.

March 22, 2011, Centennial, CO, and Mojave, CA, : United Launch (ULA) and XCOR Aerospace announced today their successful hot-fire demonstrations of a lighter-weight, lower-cost approach to liquid-fueled rocket-engine vacuum nozzles. The new nozzle technology, which uses aluminum alloys and innovative manufacturing techniques, is projected to be less costly and save hundreds of pounds of mass compared to nozzles in use today in typical large upper-stage rocket engine systems.

Based on the results of these successful technology demonstrations, ULA today announced a larger follow-on program with XCOR to develop a liquid oxygen (LOX)/LH2 engine.

Conceived as a lower-cost, risk-managed program compared to traditional engine development efforts, the multi-year project's main objective is to produce a flight-ready LOX/LH2 upper-stage engine in the 25,000 to 30,000 lbf thrust class that costs significantly less to produce and is easier to operate and integrate than competing engine technologies. If successful, the effort will lead to significantly lower-cost and more-capable commercial and government space flights delivered by ULA.

"ULA understands that we have to offer competitive prices to our government and commercial customers along with the outstanding and unmatched reliability they expect from us," said Dr. George Sowers, vice president of business development and advanced programs at ULA. "By working with XCOR, we see the potential to develop engines that offer the performance and reliability our customers need at a more affordable price." 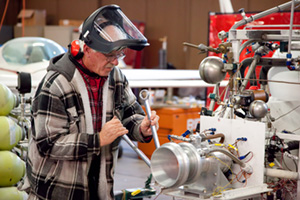 The companies structured their LOX/LH2 engine development program with multiple "go / no-go" decision points and performance milestones to ensure a cost-effective and risk-managed approach to this challenging effort. As demonstrated during prior ULA and XCOR joint engagements, XCOR's small-company environment facilitates rapid turnaround for build and test cycles that drive innovative learning, while ULA's small company project management approach ensures their needs are met but does not stifle the creative process or saddle XCOR with excessive paperwork burdens typical of large government contracts. In addition, ULA is helping to bolster the Tier 2 and Tier 3 aerospace-industrial supply chain in the , which is critical to ensuring the aerospace sector remains competitive in the global marketplace.

"This announcement validates XCOR's business mantra of 'stay focused on propulsion, Lynx and the customer' and ULA is a great customer," said Andrew Nelson, Chief Operating Officer at XCOR. "And when you have innovative, safe, low-cost and fully reusable technologies that fly multiple times a day, those technologies will find other buyers, such as ULA. Whether it is non-toxic thrusters, fully reusable main-engine propulsion, cryogenic flight-weight piston pumps, or non-flammable cryogenically compatible composite tanks and structures - the future looks bright for XCOR."

The demonstrations announced today are from integrated engine/nozzle test firings with XCOR's Lynx 5K18 LOX/kerosene engine. The engine/nozzle combination demonstrates the ability of the aluminum nozzle to withstand the high temperatures of rocket-engine exhaust over numerous tests, with no discernable degradation of the material properties of the alloys.  The tests validated the design, materials and manufacturing processes used in the nozzle, and laid a foundation for scaling the design to EELV-sized engines. The results also demonstrate the reusability of the engine and nozzle combination which is essential for low-cost, daily suborbital flights by the Lynx and other vehicles.

"We are honored to work with the great team of individuals at ULA, a Tier 1 aerospace supplier," said Jeff Greason, XCOR CEO. "The critical engine technology we're developing for ULA may one day launch satellites, capsules and space stations for government and commercial customers. Customers such as the Air Force, NASA, the National Reconnaissance Office, Boeing and Bigelow Aerospace all stand to benefit from this partnership. For a rocket engineer, there is nothing more exciting than firing a new engine for the first time. We can't wait for the day when we first fire the new hydrogen engine for ULA."

United Launch Alliance - 50-50 joint venture owned by Lockheed Martin and The Boeing Company - is the nation's rocket company, bringing together two of the launch industry's most experienced and successful teams - Atlas and Delta. ULA provides reliable, cost-efficient space launch services for the Department of Defense, NASA, the National Reconnaissance Office and other commercial organizations. ULA program management, engineering, test and mission support functions are headquartered in Denver, Colo. Manufacturing, assembly and integration operations are located at Decatur, Ala. and Harlingen, Tex. Launch operations are located at Cape Canaveral Air Force Station, Florida, and Vandenberg Air Force Base, Calif. For more information on the ULA joint venture, visit the ULA website at www.ulalaunch.com.

XCOR Aerospace is located in Mojave, . The company is in the business of developing and producing safe, reliable and reusable rocket powered vehicles, propulsion systems, advanced non-flammable composites and other enabling technologies. XCOR is currently working with aerospace prime contractors and government customers on major propulsion systems, and concurrently building the Lynx, a piloted, two-seat, fully reusable, liquid rocket-powered vehicle that takes off and lands horizontally. The Lynx production models (designated Lynx Mark II) are designed to be robust, multi-commercial mission vehicles capable of flying to 100+ km in altitude up to four times per day and are being offered on a wet lease basis. (www.xcor.com)