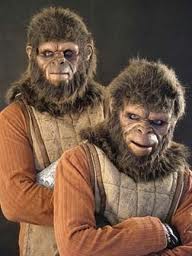 This tale is an insight into the scientific musings of Josef Stalin who somehow got it into his head that cross breeding between humans and apes was a viable proposition.  Of course he also listened to the ideas of Lysenko who had an eccentric theory for the development of speciation that consistently failed to produce results however right or wrong the theory may be.  Unfortunately Josef decide that every other scientist had to accept that same theory with predictable results.  I expect great genius was demonstrated in writing up the results.  This process is familiar to those who have followed the global warming debate.

With this bit of work and knowing what we know today and what we actually knew in Stalin’s time, the work was doomed to utter failure.

Anyway this all produced a history of sorts as did the Nazis in search of the Ark of the Covenant.  At least the excesses of global warming pretty well ended with the scandal of Climategate.

Soviet Monsters Lair of the Beasts:

Secret government files generated in Russia in 1926 under the regime of Premier Josef Stalin reveal the details of an astonishing and shocking story that eerily parallels the scenario presented in H.G. Wells’ The Island of Dr. Moreau. According to the formerly classified records, Stalin had a crazed idea to try and create an army of creatures that would be a combination of half-ape and half-man, and that would be utterly unbeatable on the battlefield.

As a result Ilya Ivanov, the former ’s top animal-breeding expert at the time, was personally told by Stalin: “I want a new invincible human being, insensitive to pain, resistant and indifferent about the quality of food they eat.” Somewhat shrewdly, and perhaps anticipating a scenario similar to the catastrophic ending in The , Stalin added that the creatures should possess “immense strength but with an underdeveloped brain.”

Certainly, in the eyes of Stalin if anyone could make the crackpot project succeed it was Ivanov. A highly regarded figure, he had established his reputation under the Tsar when, in 1901, he established the world’s first center for the artificial insemination of racehorses. But more important to Stalin was the fact that Ivanov had already tried to create a “super-horse” by attempting to crossbreed such animals with zebras.

Despite the fact that the attempts to crossbreed a horse with a zebra failed completely, Moscow’s Politburo forwarded Stalin’s request to the Academy of Science with the order to build a “living war machine;” an order that came at a time when the Soviet Union was embarking upon a crusade to turn the world upside down, with social engineering seen as a partner to industrialization.

In addition, Soviet authorities were struggling at the time to rebuild the Red Army after the devastation of the First World War, and there was also intense pressure to find a new labor force, and particularly one that would not complain. As a result, in the warped mind of Josef Stalin, the secret creation of a super race of hybrid creatures that combined the intelligence of human beings with the physical strength of some of the larger primates, such as gorillas and chimpanzees, seemed to be the perfect antidote to every problem.

The Russian scientific community swung into action and Ivanov was quickly dispatched, with $200,000 in his pocket no less, to where the first such experiment was planned: namely the impregnation of a number of chimpanzees with human sperm. Ivanov’s now-archived reports reveal that the Pasteur Institute in , secretly granted him permission to use their research station in , , for ape-breeding research.

As Ivanov advised the Politburo, however: “The biggest problem is to catch living females.” As a result, Ivanov’s team learned that the answer to this tricky problem was to burn the trees and chase the apes into cages as they scampered down the trunks. Ivanov also reported, somewhat disturbingly, on the fact that his team had “seized” a number of local African women in the area who were “to be impregnated with ape sperm.” No pregnancies resulted. More ambitious plans to impregnate female gorillas with human sperm also ended in complete failure.

At the same time, a center for such experimentation in was stealthily established in Stalin’s birthplace of , where the super-apes were to be raised if impregnation was ever seen to be successful. Unsurprisingly, none of the West African experiments succeeded. Undaunted, however, Stalin pressed on with an even more controversial plan: he arranged for a number of women “volunteers” in Russia to be impregnated with monkey sperm in an effort to determine whether or not following this particular route would prove to be more successful. Again, it was not.

That such experimentation did proceed, however, is not in doubt: only recently, workmen engaged in the building of a children’s playground in the Georgian Black Sea town of found a plethora of ape-skeletons, and an old abandoned laboratory.

In the eyes of the ruthless Stalin, and a result of the resounding failure to create an army of man-beasts, Ivanov was now in complete disgrace. As a result, Stalin sentenced Ivanov to five years in jail, which was later commuted to five years’ exile in the Central Asian in 1931. He died a year later, after falling sick while standing on a freezing railway platform.

Nick Redfern is the author of many books, including Final Events, The Nasa Conspiracies, and the forthcoming The Real Men in Black.