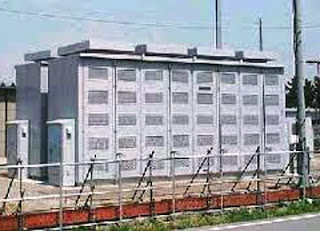 The good news here is that someone has the money to develop the regulatory framework, whatever you think of the value of this particular deliverable.  First in is never fun.

This opens the door for additional energy storage strategies to be deployed and that is now important because of the advent as posted recently of the thin super conducting power cable.

Energy storage is now becoming practical, not least because super conducting technology will quickly eliminate most of the engineering losses.

We will continue to post on developments here as the industry now quickly emerges.

Audacious plan for massive NaS energy storage farm in is still on track.

Late last year, I managed to get the first U.S. interview with Claus Rubenius about his plans for a first-of-its-kind energy storage warehouse in . Claus Rubenius is founder and inventor of 's Amplex.

This is a bold plan that will require billions of dollars, hundreds of acres of land, the alignment of regulatory stars and not a little bit of luck to succeed. But if it becomes reality, it could make fundamental changes in the way renewable energy (and conventional energy) is generated, transmitted and valued.


Rubenius refers to the concept as an "energy warehouse" and the plan is to use 1,000 megawatts of sodium sulfur (NaS) batteries funded with the help of Japan's Export/Import bank.


Rubenius has agreed to purchase land and intends to install one gigawatt of NaS batteries over the course of seven years. Rubenius looks to offer the energy storage capacity to energy companies and utilities in both the and .

NaS batteries are bankable and they work, although they are not cheap. NGK is the world's only volume producer of the product (originally, the technology came from Ford of the ).

The firm claims, arguably, that energy storage is the "only near-term solution for the intermittent nature of most renewable energy sources. When intermittent power sources [e.g., wind power] reach high levels of penetration, energy storage provides the critical buffer to the power grid."


Other parties in the wind industry and elsewhere believe that the grid can handle the intermittent nature of renewables with only minimal help from energy storage.

In any case, the Rubenius plan has the potential to solidify renewables' place in the energy mix and to create innovative new business models for utilities as well as entrepreneurs.

The site chosen is Silicon Border’s Science Park -- developed for manufacturing high technology products in . The location was chosen because of its existing infrastructure and close proximity to both the power grid and the grid, including the new Power Grid expansion. In the (U.A.E.), the Amplex Group (a RUBENIUS subsidiary) has installed and commissioned the largest energy storage system in the world -- 350 megawatts.

Since I hadn't heard anything about the progress of the project save for some photo ops at COP16 and since one of our valued commenters had questioned the reality of the endeavor, I checked in with Mr. Rubenius, the good people at Silicon Border, and with a representative of the Mexican government.

It looks like there's been a supply chain speedbump, but otherwise this project is full speed ahead.

Mr. Rubenius said that he expects to install 50 megawatts in 2011 although there is a bottleneck in the supply of the high temperature NaS batteries from 's NGK. Rubenius said that one of the project developers has permitting already in place to access transmission capacity. He said, "The project is moving as planned and we are in close communication with the Mexican government."

Rubenius also said that NGK was considering building the batteries in .

I spoke with Daniel J. Hill, the Chairman & CEO of Silicon Border, the 4,500-acre science park where the batteries would be sited. He emphasized that there is existing grid infrastructure to support a storage facility of the size envisioned by Rubenius.

Hill assured me that "this is a real project."  There have been meetings between 's President Calderon and President Obama about the cross-border trade of energy, especially renewable energy.  Hill also said that the CEO of NGK had told President Calderon that NGK supported the Rubenius plan for .

The next party weighing in was José Neif Jury Fabre of ProMexico in , credited as the minister of the General Consulate of in . ProMexico is the trade and investment promotion agency of the government of . He stated in an email:


I can state that ProMexico and the rest of the Mexican Government is supporting 100% Rubenius and their Energy Warehouse Project in Mexicali, we have full confidence that the project will have a successful development and our President Felipe Calderon does as well.


I want to refer you to a video of the President Calderon where he personally presents the project to the press and media representatives in COP 16 event in Cancun last December 2010 [video is in Spanish].

This is good news for the Rubenius project -- having politicians, funding, and technology supply lined up for the application. But other legs have to be in place to make this work -- regulatory and utility stars have to be aligned as well. And as we've covered extensively, the language for energy storage and the regulatory framework for large-scale energy storage are still works in progress.
Posted by arclein at 12:01 AM