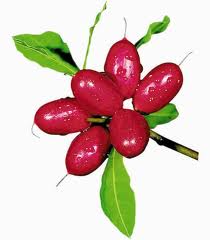 When I first came across this berry, I was dismissive because I was writing about Stevia.  I should not have been.

This berry works by adjusting your taste receptors to accept food that is not only not sweet but also sour or bitter.  This may not sound important until one recalls that everything we eat has been bred to work to our taste. The flip side is there is very little in the natural environment that is actually fit for human consumption.

On top of all that, sour and bitter is a defense against us in the first place.

On the farm I grew up on, owners in the nineteenth century had planted a wide variety of apple trees.  Out of perhaps fifteen or so scattered through the fencerows, only two provided fruit fit to use as hand fruit.  Yet of the two one was sweet and scale and worm ridden and thus barely usable.  The other was tart enough to provide an ample fall and early winter supply.  The rest could not be eaten by us or the apple worms.

My point is that we will want to grow fruit in the wild wood as a matter of good husbandry.  They have to be sour.  This berry allows us to eat them and to adjust flavor in cooked sours.

I wonder if this berry can offset the flavor of tannin in acorns?  Roasted acorns could be fit to eat yet.

The Miracle : A Solution to World Hunger?
By Michelle Woo

Is this our best weapon against famine?

A few years ago, we heard about the miracle berry, a cranberry-like fruit discovered in that tricks your mind into thinking sour and bitter foods are sweet. The berries emerged in the as a novelty, marketed on sites such as ThinkGeek with lines including, "Warp your taste buds" and "Fun for tasting parties." My suckerhusband bought a pack, and lo and behold, they do work! Pop in a berry, and lemons taste like oranges. Tomatoes taste like really, really sweet tomatoes. It's freakin' weird.

But can these miracle berries serve a purpose beyond a cool house-party trick?

chef Homaro Cantu thinks so. At last week's TED conference in Long Beach, he told an audience that he believed the berries could help feed people in famine-stricken regions by transforming what would normally be inedible ingredients, such as wild and bitter grasses, into palatable food, Wired reports. For his own two daughters, Cantu makes a faux maple syrup (a concoction of corn starch, water, lemon juice and the miracle berry) and a faux soda (carbonated water, lemon juice and the berry). So sneaky.

Critics, however, say this hunger-ending method is cost-prohibitive, as it originally took three berries to produce one tablet. Today, though, one berry can make 16 tablets, and Cantu says they're also experimenting with miraculin--the plant protein that binds to the sour and bitter receptors in the mouth, preventing these flavors from being tasted--in powder and an inhalable form. The berry may also have possible health benefits, serving as a natural sweetener for diabetics and eliminating the metallic flavor chemotherapy patients taste in food.


Now, who wants some grass for dinner?

From Wikipedia, the free encyclopedia

Synsepalum dulcificum produces berries that, when eaten, cause sour foods (such as lemons and limes) subsequently consumed to taste sweet. This effect is due to miraculin, which is used commercially as a sugar substitute. Common names for this species and its berry includemiracle fruit[2] and miracle berry. These common names are shared also by Gymnema sylvestre and Thaumatococcus daniellii,[2] two other species that are used to alter the perceived sweetness of foods. Additional common names include miraculous berry [2] and sweet berry.[3][4][5] In where the species originates, common names include agbayun,[6] taami, asaa, and ledidi.

The berry itself has a low sugar content[7] and a mildly sweet tang. It contains a glycoprotein molecule, with some trailing carbohydrate chains, called miraculin.[8][9] When the fleshy part of the fruit is eaten, this molecule binds to the tongue's taste buds, causing sour foods to taste sweet. While the exact cause for this change is unknown, one theory is that miraculin works by distorting the shape of sweetness receptors"so that they become responsive to acids, instead of sugar and other sweet things".[10] This effect lasts 15–60 minutes.[11]

The berry has been used in West Africa since at least the 18th century, when European explorer Chevalier des Marchais,[12] who searched for many different fruits during a 1725 excursion to its native West Africa, provided an account of its use there. Marchais noticed that local people picked the berry from shrubs and chewed it before meals.

An attempt was made in the 1970s to commercialize the ability of the fruit to turn non-sweet foods into sweet foods without a caloric penalty but ended in failure when the FDA classified the berry as a food additive.[7] There were controversial circumstances with accusations that the project was sabotaged and the research burgled by the sugar industry to prevent loss of business caused by a drop in the need for sugar.[13]The U.S. Food and Drug Administration (FDA) has always denied that pressure was put on it by the sugar industry but refused to release any files on the subject.[14] Similar arguments are noted for the FDA's regulation on Stevia now labeled as a "dietary supplement" instead of a "sweetener".

For a time in the 1970s, US dieters could purchase a pill form of miraculin.[10] It was at this time that the idea of the "miraculin party"[10] was conceived. Recently, this phenomenon has enjoyed some revival in food-tasting events, referred to as "flavor-tripping parties" by some.[15] The tasters consume sour and bitter foods, such as lemons, radishes, pickles, hot sauce, and beer, to experience the taste changes that occur.
[edit]Cultivation

Small specimen in a botanic garden

The plant is a shrub that grows up to 20 feet (6.1 m) high in its native habitat, but does not usually grow higher than ten feet in cultivation. The plant grows best in soils with a pH as low as 4.5 to 5.8, in an environment free from frost and in partial shade with high humidity.

The plants first bear fruit after growing for approximately 2–3 years,[citation needed] and produce two crops per year, after the end of the rainy season. It is an evergreen plant that produces small red berries, with flowers that are white and are produced for many months of the year.

The seeds are about the size of coffee beans. Without the use of plant hormones or electricity, the seeds have a 24% sprouting success rate.[citation needed]

Miraculin is now being produced by transgenic Tomato plants.[16],[17]

In tropical , where this species originates, the fruit pulp is used to sweeten palm wine.[18] Historically it was also used to improve the flavor of maize bread gone sour.[6]

Attempts have been made to create a commercial sweetener from the fruit, with an idea of developing this for diabetics.[12] Fruit cultivators also report a small demand from cancerpatients, because the fruit allegedly counteracts a metallic taste in the mouth that may be one of the many side effects of chemotherapy.[12] This claim has not been researched scientifically,[12] though in late 2008, an oncologist at Mount Sinai Medical Center in Miami, Florida, began a study and, by March 2009, had filed an investigational new drug application with the U.S. Food and Drug Administration.[11]

In Japan, miracle fruit is popular among diabetics and dieters.[8][9]