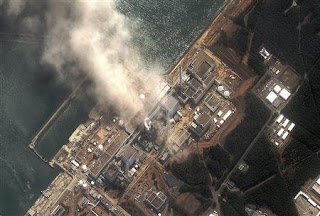 I do not see any other option for except a complete decommissioning and dismantlement.  It may also not be possible.

That is the big question.  Cooling hardware is damaged and radiation levels are high enough in places to prevent meaningful access.  Add the fact that three reactors have experienced partial melting and things really gets miserable.

Today, they are still fighting to cool the reactors down to a safe level.  The mere fact that rods are not been extracted and removed from the facility tells us that it is not easy.  Rather obviously, that fuel could easily be stored at all the other reactors around the country.  It should have been a design objective as a worst case response.

Pumping sea water was an untested last resort solution that was in place.  That we are using fire trucks to do just that is confirmation that even that was compromised and inadequate.

Possibly it will take months to cool the reactors sufficiently

I expect that only a portion of the plant can be properly powered up and made to work.  This means that at least one reactor will likely remain critical for some time to come.  This story is a long way from been over and will likely end up with a couple of encased reactors annoying us as we have elsewhere.  Hopefully the rest can be properly torn down.


Osaka (AFP) March 20, 2011 - Engineers at Japan's stricken nuclear plant were checking the cooling and other systems at reactor No. 2 late Sunday, aiming to restore the power soon, operator TEPCO said. An external electricity supply has been restored to the distributor but power at the reactor unit was not yet back, spokesman Naohiro Omura said. "It will take more time. It's not clear when we can try to restore the systems," he said. The cooling systems -- designed to protect the plant's six reactors from a potentially disastrous meltdown -- were knocked out by the March 11 tsunami, and engineers have been battling rising temperatures.


The radiation-suited crews were striving to restore electricity to the ageing facility 250 kilometres (155 miles) northeast of , after extending a high-voltage cable into the site from the national grid. The electricity line into the No. 2 reactor usually also feeds power to the No. 1 reactor. Fire engines have also been spraying seawater on the reactors and fuel rod pools, where overheating is a major concern. "Our desperate efforts to prevent the situation worsening are making certain progress," said government spokesman Yukio Edano. "But we must not underestimate this situation, and we are not being optimistic that things will suddenly improve," he told a news conference.


's top government spokesman on Sunday signalled that the quake-hit nuclearpower plant at the centre of an ongoing crisis following a series of explosions would be scrapped.

The reactor cooling systems at the No. 1 plant, located 250 kilometres (155 miles) northeast of , were crippled by the 9.0-magnitude earthquake and tsunami that rocked 's northeast coast on March 11.

A series of explosions and fires followed. Crews and emergency personnel have since worked around the clock to try to bring the temperatures down to avert a potentially catastrophic meltdown.

"As the government has (nuclear energy) authorities, it's difficult for me to say anything definite before following the appropriate procedures," the spokesman, Yukio Edano, told reporters.

"Looking at the plant from an objective point of view, I think it's clear in a way if the Fukushima Daiichi (No. 1) plant is in a state of being able to function or not," he said.

"I hope you can get it from the way I said it."

Osaka (AFP) March 20, 2011 - Days before Japan plunged into an atomic crisis after a giant earthquake and tsunami knocked out power at the ageing Fukushima nuclear plant, its operator had admitted faking repairrecords.

The revelation raises fresh questions about both Tokyo Electric Power Co (TEPCO)'s scandal-tainted past and the government's perceived soft regulation of a key industry.

The operator of the No. 1 plant submitted a report to the country's nuclear watchdog ten days before the quake hit on March 11, admitting it had failed to inspect 33 pieces of equipment in its six reactors there.

A power board distributing electricity to a reactor's temperature control valves was not examined for 11 years, and inspectors faked records, pretending to make thorough inspections when in fact they were only cursory, TEPCO said.

It also said that inspections, which are voluntary, did not cover other devices related to cooling systems including water pump motors and diesel generators.

The report was submitted after the regulator ordered operators to examine whether inspections were suitably thorough.

"Long-term inspection plans and maintenance management were inadequate," the nuclear safety agency concluded in a follow-up report two days after TEPCO's admission. "The quality of inspection was insufficient."

The safety agency ordered the operator to draw up a corrective plan by June 2.

But on March 11 the 9.0-magnitude earthquake unleashed a ten-metre (33-feet) tsunami, knocking out back-up generators hooked to the plant's cooling system aimed at keeping fuel rods from overheating and releasing dangerous radiation.

A nuclear safety agency official who declined to be named said: "We can't say that the lapses listed in the (February 28) report did not have an influence on the chain of events leading to this crisis".

"We will conduct thorough research on TEPCO's activities up until this crisis but that will come afterwards. For now we are only working on saving the plant," he added.

Firefighters, policemen and troops are currently hosing the damaged reactors in a desperate bid to stop them overheating, and trying to restore electricity that would kick-start cooling systems.

Images of the exploding plant triggered global alarm, but for many in , TEPCO's track record of safety issues and attempts to cover them up add to suspicion over a flow of opaque, erratic information about .

In 2002 TEPCO admitted to falsifying safety reports which led to all 17 of its boiling-water reactors being shut down for inspection, including . The revelation forced the then TEPCO chairman and president to resign.

And in an eerily familiar event, a 2007 earthquake paralysed its Kashiwazaki-Kariwa nuclear plant -- the world's biggest -- and more radiation leaked than TEPCO initially acknowledged.

TEPCO later said it underestimated the potential impact of an earthquake on the facility.
"People don't trust TEPCO, they don't expect TEPCO to tell the truth," said Philip White of Tokyo-based Citizens' , a group of scientists and activists against nuclear power.

"The problem is one of a culture of denial -- denial that this could occur, denial could be subject to a big quake and the scale of the wave that could come."

Parallels with how TEPCO has handled and BP's dealing with the oil spill disaster have been drawn. TEPCO has lost 1.93 trillion yen ($24 billion) in market value since the disaster.

Prime Minister Naoto was heard by a stray microphone furiously berating TEPCO officials after they took an hour to notify the government of the first explosion to hit the plant. "What the hell is going on?" was heard to say.

When the February report was released, the local government also demanded redress, saying the "problem threatens the foundation of trust", media reported at the time.

TEPCO had issued the report after a fresh inspection at its Kashiwazaki Kariwa plant also revealed oversight.

"They had submitted the report because they were afraid they would get in trouble if they didn't," another nuclear safety official said.