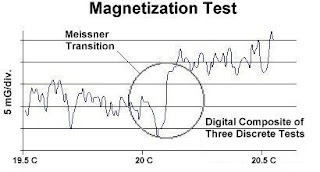 This is an update on previous work and it appears that they have successfully reached the holy grail of superconductivity research.  We have room temperature effects that could easily be fitted into a framework that needed modest cooling at most.  Of course, turning all this into something that is commercially useful is quite another matter as we have seen with the materials finding their way into cryogenic systems today.  Yet it has been done even there.

This is a classic example of science progressing at its best.  It has taken over a century to reach this point from the initial recognition of the possibility.  Hundreds, if not thousands, worked toward this day.  It is still not particularly complete but we are glimpsing the end of the tunnel.

As I have posted, the principle requirement of a MFEV (magnetic field exclusion vehicle) is a thin layer of superconducting material at as high a temperature as possible.  This is getting us there.  Simply producing hexagonal chips of such material could easily be assembled into such a structure.

Superconductors.ORG herein reports the observation of superconductivity near 20 C.

In eight magnetization tests a small amount of the compound (Tl5Pb2)Ba2MgCu10O17+ consistently produced sharp diamagnetic transitions (the Meissner effect) near 20 Celsius (see above graphic), and resistive transitions that appeared near 18.5C (see below right). These temperatures are believed accurate +/- 2 degrees. 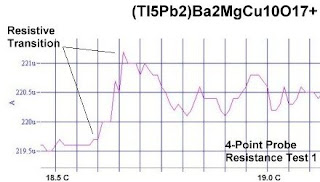 Resistance-v-temperature tests of this material were performed using a 4-point probe. Four significant bits of data resolution were necessary to resolve the 18.5C critical transition temperature (Tc) due to a low signal-to-noise ratio (S/N). A sharp transition appeared across just 1.5 uA of a 220 uA signal. This suggests a superconductive volume fraction less than 1% of the bulk.

This extraordinarily high Tc was achieved by engineering a theoretical D223 structure (where D=11 hex) that pushes the limit of the longest C-axis lattice that will superconduct, while simultaneously establishing near-optimum Pb-doping of the Tl-Cu-O blocking layers (see structure at left).

In 2008 a Sn-In-Pb-Tm cuprate produced superconductivity near 195K . That material had a C-axis lattice constant around 33 angstroms. Attempts to go beyond 33 Å within that system failed to produce signs of superconductivity. That fact pointed to 33 Å being a rough upper size limit for a superconductive unit cell within this family of copper perovskites. Since the 3 Celsius superconductor discovered in December 2010, had a C axis length under 28 Å, the next attempt to advance high Tc focused on increasing the unit cell parameters.

The first material attempted was (Tl5Pb)Ba2MgCu9O15+ which had a C axis length near 30 Å, but a reduced percentage of Pb doping - around 16%, sted 20% (see below 7C graphic). (Tl5Pb)Ba2MgCu9O15+ displayed a magnetic Tc near 9C (282K) and resistive Tc near 7C (280K). This was an improvement. However, within its magnetization plot were signs of still higher superconductivity being generated by a minority phase.

(Tl5Pb2)Ba2MgCu10O17+, with a unit cell near 32.7 Å, was then synthesized, displaying an unambiguous diamagnetic transition near 20 Celsius.

These 18C and 7C structures are shown below alongside the previous world record holders for comparison.

With two atoms of divalent Pb, the insulating layer of the 18C superconductor is hole-doped 28.5%. This increased doping level approaches the optimum of 25% discovered empirically within the Sn-In-Pb copper-oxide family in 2008. Additionally, 28.5% is near a 30% optimum level for Pb-doping found by Shao, et al, in 1995(1).

Dots have been placed within the C1 plot below, depicting where D223(Tl5Pb2-Mg) and B223(Tl5Pb-Mg) lie relative to the other high performance thallium-cuprates. Temperatures plotted (in Kelvin) are resistive. The correlation between planar weight ratio and Tc is unmistakable. 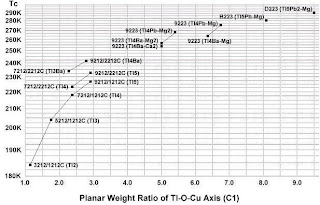 As with prior discoveries that advanced high Tc through asymmetry along the C axis, this material does not form stoichiometrically (by conventional mixing of chemicals). It must be synthesized using the layer cake method, as shown below. The prototype pellets each had roughly 20 to 22 layers. And, even using this technique, the volume fraction is low. Thus, commercialization will have to wait for a refinement method to be developed.

This discovery is being released into the public domain without patent protection in order to encourage additional research. Synthesis was by the solid state reaction method.

The below stoichiometric ratios were used for the ODD layers:

...and the below ratios for the EVEN layers.

The chemical precursors were pelletized at 70,000 PSI and sintered for 35-36 hours at 865C. The pellet was then annealed for 10 hours at 500C in flowing O2. The magnetometer employed twin Honeywell SS94A1F Hall-effect sensors with a tandem sensitivity of 50 mv/gauss. The 4-point probe was bonded to the pellet with CW2400 silver epoxy and used 7 volts on the primary. Temperature was determined using an Omega type "T" thermocouple and precision OP77 DC amplifier.

RESEARCH NOTE: The copper-oxides are strongly hygroscopic. All tests should be performed immediately after annealing.