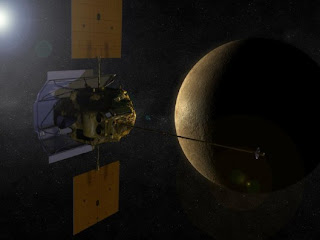 Messenger has been inserted into orbit around Mercury and will be now adjusting its orbit from strongly elliptical down to near circular.

We will be soon getting plenty of close images from the place.  This is always neat to see.  I recall the first orbit of the moon that gave us a rear view for the first time.

Anyway, we are there.

NASA has reported that its MESSENGER spacecraft is now in orbit around the planet Mercury – the first ever mission to achieve this feat. More than 40 years on from the first moon landing in the age of the Mars rovers and space tourism, it's easy to overlook just what a remarkable a feat this is. These amazing facts might just jolt our sense of wonder – before reaching orbit on Thursday at approximately 9 pm EDT, MESSENGER traveled for six and a half years and covered 4.9-billion-miles in which it went through three flybys of Mercury, one of Earth and two of Venus. After firing its main thruster for 15 minutes the spacecraft slowed by 1,929 mph (leaving around 10 percent of fuel in the tank for orbit correction maneuvers) and it is now in a 12 hour elliptical orbit around the innermost planet some 96.35 million miles from Earth.

MESSENGER (short for the slightly less palatable MErcury Surface, Space ENvironment, Geochemistry, and Ranging) is the first mission to return data from Mercury since Mariner 10 photographed around 45 percent of the planet's surface in 1974-75. It will stay in orbit for a year and map around 90 percent of the planet in color.

The spacecraft is carrying high-res imaging equipment and an array of spectrometers which are amazingly kept at room temperature by its heat shields despite the proximity of the Sun. On March 23 these instruments will be switched on and tested before the primary science phase – which will deliver new insights into the make-up of the little understood planet – begins on April 4. A full run down on the MESSENGER's payload can be found here.

"Despite its proximity to Earth, the planet Mercury has for decades been comparatively unexplored," said Sean Solomon, MESSENGER principal investigator of the Carnegie Institution of . "For the first time in history, a scientific observatory is in orbit about our solar system's innermost planet. Mercury's secrets, and the implications they hold for the formation and evolution of Earth-like planets, are about to be revealed."

Your blog provides very interesting details and your postings are really exceptional. I love your blog because of its "Unique" content and valuable information. Its something different compared to thousand other blogs.

Your blog really inspired me and I feel my blog visitors would also enjoy reading through your blog. So I have added your link in my blog http://vigltd.blogspot.com/ under "Informative Blogs" Section.

I would be glad if you could also place my link in wonderful blog of yours. My Blog information is as follows:

Thanks for your time.