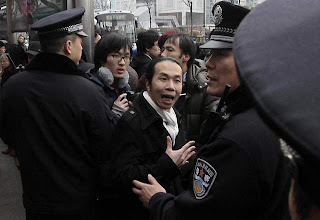 This article makes clear that a revolution in will be tough to initiate or even sustained.  The fact is that hundreds of local demonstrations are countenanced on an ongoing basis mostly because it airs local grievances and helps the central government bring some accountability to the lower levels.

The other unspoken reason is that anyone can see that the next step for is easily implemented and needs only a local reformer or a spark at a local level to set it in motion.

That step is the adoption of general elections at the local levels that permits broader inclusion of non party leaders.  They already have an apparatus in place and simple tweaks will open the franchise.  It could even be staged in.  Recall the classical franchise development was largely staged.

Once the process begins, however grudgingly and staged, activist’s energy will be channeled into making it work and to make it properly inclusive.

From that emerging base, democratic pressure will soon subsume the higher levels by throwing up attractive reformist leadership.

The central government has held back on the free flow of ideas mostly to prevent anything running out of control.  Their escape from this pressure cooker is to divert as above and it must happen sooner than later.

The “days of rage” sweeping through the Middle East and North Africa (MENA) have raised questions about the possibility of a similar movement erupting in . At a glance, the ingredients for uprising appear to be present. Online calls for a “Jasmine Revolution” in resulted in a massive staging of security forces at the planned protest sites, which could be taken as a sign of the Communist Party’s insecure grip on power. Like several of the MENA governments, ’s ruling elite is plagued by corruption and is preparing for a transfer of power. Inequality has devolved to Sub-Saharan levels, and the political system provides few outlets for popular grievances to be aired. However, is unlikely to face a popular uprising for six reasons, discussed in more depth in our latest China Monthly.

First, and most importantly, ’s party rule implies that a larger segment of the population is represented by or dependent on the government than in the MENA region’s autocratic systems. While the vast majority of the population has little say in how China is run, the Chinese Communist Party (CCP) cannot maintain its rule by providing private goods only to a narrow segment of the population. Instead, the CCP provides a mix of private and public goods to its 80 million members and those other elites who might otherwise challenge its rule. Instead of forming a restive middle class, those who have managed to move up the income ladder largely have become the CCP’s support base. Additionally, the CCP has institutionalized the transfer of power between generations, a process seen as more legitimate than the geriatric MENA leaders’ attempts to transfer power to their sons.

Second, has maintained strong economic growth throughout the reform period, with few spells of high inflation. Strong growth increases the incentives for rulers to maintain power (as it makes political monopoly more valuable) and decreases the threat to their power by legitimizing their rule. A monetary overhang and demand-side pressures are driving China’s inflation higher this year, but the Party will do everything it can on the supply side to contain inflation expectations.

Third, while official corruption plagues China, it appears highly decentralized. It is local officials who confiscate land from citizens for development, ignore environmental regulations to boost industrial output and benefit from a judicial system that remains incapable of challenging their authority. This dynamic explains the apparent mismatch between survey data that suggest Chinese citizens are largely satisfied with national conditions and the tens of thousands of protests and mass incidents reported each year.

Fourth, while unemployment among college graduates and a skewed sex ratio are problems in , there is no youth bulge to provide the tinder for an uprising along the lines of those in the MENA region. As China’s bountiful labor force has begun to disappear in the coastal export hubs, a significant portion of the young population has enjoyed brighter future prospects and wage hikes.

Fifth, from the “Great Firewall” to the systematic arrest of any potential opposition leaders, the CCP has been successful in disrupting strategic coordination among potential adversaries. This year, will spend RMB624 billion (US$95 billion) on internal security, more than it plans to spend on its military. Human Rights Watch’s Nicholas Bequelin reported that since calls for a Jasmine Revolution first appeared on microblogs, ’s security forces have “rounded up, detained, or placed under house arrest more than 100 people nationwide.” The CCP’s panoptic monitoring of online forums requires activists to either use VPN services that only a relatively rich, urban segment of the population can access or disguise their complaints in coded language that limits the message to a narrow demographic already initiated into the cause.

Finally, there is no strong voice for reform within the CCP along the lines of Hu Yaobing, Zhou Ziyang or Bao Tong in the 1980s. In 2010, Premier Wen Jiabao made several public calls for political reform that raised hopes among Western commentators and Chinese liberals that Wen’s bleeding heart was shining through in his final years in the Zhongnanhai. However, political reform was not on the agenda at the Fifth Plenary Session of the 17th Central Committee in October 2010, and Wen’s comments did not depart significantly from standard CCP messaging on gradual intra-Party political reforms.

Still, each of the silver clouds listed above has a black lining: Party rule means decentralized power that opens opportunities for corruption, strong growth creates the incentives and the means for an opposition group to challenge CCP rule and China’s demographics may eventually create problems for the CCP’s leadership. Perhaps the most important threat to the CCP’s legitimacy in the medium term will be the slowing of Chinese economic growth. Demographics and malinvestment will soon bite into ’s potential growth, and dithering on financial-sector reforms raises the prospect of a sharp contraction in the medium term. In the past, it has taken anemic growth and fiscal woes to topple Communist governments. The Party’s emphasis on economic progress over political reform is likely to continue, which could allow the clouds on the horizon to darken further.