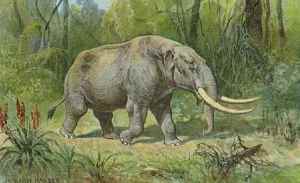 What this makes clear is that in the general areas of interest, local traditions remember the Mammoth.

It is also clear that mankind hunted them out to the operating extent of their hunting ranges over the past few thousands of years.  In , they also hunted to extinction both the Asian bison and the muskoxen.  Both have begun restoration.

That larges parts of and were never particularly occupied and hunted out is actually reasonable.  In and surely in , villages relied on the bounty of the salmon rivers and congregated there, thus controlling where their hunting ranges were.  Distant valleys remained distant.

Besides, the mammoth was not a stupid animal and avoidance works.  That strategy was plausible here and they likely have good night vision.

Could small herds of mammoths live out there today?  My sense of it is that it is at least possible and particularly so with our WWII sightings when there was a sky full of slow moving, low flying aircraft.

Today the hunting ranges have been generally abandoned and all wildlife is recovering.  Perhaps even the mammoths will soon come out of the shadows.  It will take a while for the populations to build up and for them to expand out of their refugia.  Thus we have to wait.

The second item introduces the sightings taking place in New York State, and the likelihood that any such sighting would be a mastodon.

In fact, whatever version of mammoth exists in Asia, it is almost certainly a browser also.  The open plains are just too vulnerable while a forest is cover to a few feet.

Again we grossly overestimate our ability to actually observe wooded country.  Unless one walks a close grid, you have seen little and flushed almost nothing.    On top of that it is almost impossible for a human wearing shod boots to walk quietly in the woods.  It takes a lot of effort, and if at night when you hear a twig snap, it is certainly a human.  Every other critter remains  unheard. 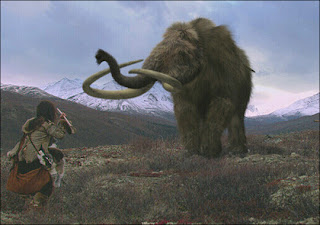 Have all woolly mammoths gone extinct? Perhaps not.


Although orthodox science has declared the mammoth species to be long dead, it said the same about dinosaurs even though dinosaurs called tuataras still exist in .

Reports during the last several centuries suggest that small pockets of mammoth survivors may still walk the earth.


During the mid-19th Century, large shaggy beasts were reported to Russian authorities by hunters in northeastern . Scientists in took the reports seriously, but no real supporting proof was ever discovered.


Almost 70 years later, M. Gallon—a French chargé d'affaires posted in , —wrote that while traveling through in 1920 he met with a Russian fur-trapper. The man claimed, M. Gallon wrote, that he had personally seen giant, furry elephants living deep in the taiga forest. The trapper admitted the giant beasts frightened him and he's never seen anything like them before or since.


Gallon said the most remarkable thing about his meeting with the trapper was that the man knew nothing about woolly mammoths, what they looked like, or that they were thought to be extinct creatures. The trapper talked about the animals as another type of forest animal he'd come across during his days as a trapper and took it for granted that the great beasts lived on the tundra and forests.


Early missionaries to the new land of North America were told by the Ponca Indians, who had migrated from what later became northeastern Nebraska, that they had sometimes hunted and killed what could only be called woolly mammoths during their twice a year tribal buffalo hunts. The kills were made along the banks of what is now called the Niobrara River.


According to their calculations, the missionaries believed the hunts and kills took place hundreds of years earlier, perhaps as far back as the 12th Century.


Much farther northwest come stories from the Kaska tribe of northern .


A university ethnologist recorded the Kaskaian tradition during 1917. The tribes elders told him of “A very large kind of animal which roamed the country a long time ago. It corresponded somewhat to white men's pictures of elephants.


"It was of huge size, in build like an elephant, had tusks, and was hairy. These animals were seen not so very long ago, it is said, generally singly, but none have been seen now for several generations."


The researcher learned that Indians occasionally found the giant bones. Later the ethnologist claimed he and some companions had seen one of the bones too: a shoulder-blade as wide as a table, approximately three feet across.


Swedish investigator Bengt Sjögren relates stubborn tales about surviving mammoths in . According to Sjögren, a Henry Tukeman swore he killed a woolly mammoth in northeastern during October of 1899. Investigating all the claims the man supposedly made, Sjögren concluded the entire story was a hoax.


Native tribes including the Inuit, however, claimed that they had seen and hunted the great shaggy beasts. The stories had enough detail that American zoologist Charles Haskins Townsend traveled to the region. He met with some natives that were trading mammoth tusks. When he asked them if any of the animals were still alive and showed them drawings of the creatures, some of the natives, trying to be helpful, agreed they had seen them.


Sjögren was convinced that none had. He believes that the meetings with Townsend began the persistent cycle of myths about living Alaskan mammoths.


Last of the mammoths?


Scientists have determined that "dwarf" woolly mammoths still survived just 4,000 years ago. They believe the diminutive mammoths went extinct on an island north of Siberia, in the .


Because the smaller mammoths disappeared more than 9,000 years after their full-sized cousins went extinct elsewhere in the world, it's a strong probability that humans hunted them into extinction.


Whether the Indian legends of hunting them as recently as 800 years ago is true, or if Siberian trappers really saw mammoths—or something like them—less than 200 years ago, no one may ever know for sure.

Enthusiasts claim: “Proof in our time”

The latest, in a series of woolly mammoth sightings, was reported outside the town of in upstate NY this week. “We came very close this time to having the physical evidence we need to get the Department of Environmental Conservation  (En Con) to accept the truth of this and do something,” said Kevin Poter of Citizens for Mammoth Protection. “En Con has always denied the existence of the mammoth no matter how many fuzzy photographs and eyewitness sightings they get. They are obviously afraid of the truth. Admitting there are mammoths would mean a state agency would have to admit they are wrong. And they just can’t bring themselves to do that, now can they? Because if En Con were to admit they were wrong, and they most certainly are, they would have to protect the mammoths. And that would get them in trouble with their corporate masters. It’s a conspiracy, that’s what it is. Well I’m here to tell you that living, breathing, mammoths are out there whether En Con wants to admit it or not.”

A mammoth and a native person living in harmony, circa 12,000 BC

Paleontologists believe that both the mastodon and the mammoth disappeared some 10,000 years ago with the rest of the Pleistocene megafauna. Any claimed sightings are considered sheer fantasy, delusions, or just some prankster pulling our collective leg.  “Another mammoth sighting? What did you find this time? A big footprint? Some guy off the side of the road at 2 am drunk out of his mind who claims one ran out in front of him and that’s why he smashed up his truck?” scoffed Dr. Paula Ashter, head of The Institute for The Search For Long Since Dead Megafauna. “I’ve been in this business for over 20 years now and I can tell you I’ve seen it all. Next you’ll be telling me some joker claims she’s seen a mountain lion in the . That’s a stitch. If I had a nickle for every one of these sightings, I wouldn’t have to spend half my time looking for grant money to fund this dead-end job.”

The continued existence of the mammoth is controversial in part because no actual physical evidence of a live specimen has yet to surface.  “If they were out there somebody, somewhere would have at least stepped in a gigantic turd by now,” remarked Dr. Ashter.  “But we have yet to see the dirty sneaker to prove it.” Indeed some argue that, almost certainly, any mammoth sightings are more probably sightings of the similar, but less well known, mastodon. “It’s a common mistake,” explained Sheila Voop, president of Mastodon Now. “But they are really very different species. Any resemblance is strictly superficial.  Mastodons are browsers while mammoths are grazers. They’re not even in the same genus for gosh sakes. I mean really. I very much doubt anyone has seen a mammoth around here. We don’t have the grasslands to support them. A mastodon, though; now that’s a very different thing all together. They like to nibble on leaves and twigs. We’ve got plenty of that around here. One just last year ate my favorite lilac right to the ground. I have some photos somewhere of the poor thing. I just wish I could remember where the heck I put them.”

The mastodon: oft neglected cousin to the mammoth

Most scientists argue that humans were likely a significant cause of the demise of both species. Native groups however bristle at that explanation. “Our ancestors lived in harmony with nature,” said Tina Two Smokes, researcher with the Ancient Peoples Were in Harmony with Nature Foundation. “They only took from nature as much as they needed. If there was a decline in the mammoth or mastodon population our ancestors would have reacted quickly by banning hunting and instituting a breeding program. We have no evidence of any of that happening so it follows that mastodons and mammoths must still be around today. They’re probably just really good at hiding. How else could they have survived all this time?”