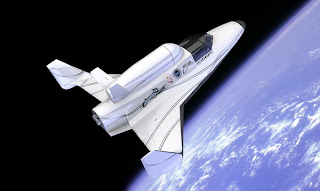 The Lynx technology development has advanced to the point that there is sufficient confidence in the system been built to enter into a first service delivery contract.

Note the rapid turn around built into the design.  This bird is truly airworthy.

These guys are developing suborbital capabilities not presently available and necessary for a fly into space technology package which is today much closer.

February 24th, 2011, Mojave, CA, USA:   In a first for the reusable suborbital launch vehicle industry, XCOR Aerospace announced today that the Southwest Research Institute (SwRI), a commercial entity, has purchased six suborbital flights to carry SwRI experiments as pathfinder missions for other SwRI suborbital clients.  This is the first such contract SwRI has issued, and XCOR is proud to be chosen for this opportunity.

"When someone issues a commercial contract with their own money, this means something," said XCOR Chief Operating Officer Andrew Nelson. "XCOR feels SwRI signing their first contract with us demonstrates the superiority of the Lynx platform over others in the field.  We have the ability to fly up to four times a day, quickly perform an experiment and then return it to the customer.  In addition, we offer the best price in class versus the competition."

Each of the six flights will include a SwRI trained principal investigator / payload specialist.  This group of talented individuals includes Dr. Alan Stern, former NASA Associate Administrator for Science, Dr. Dan Durda, who has campaigned in F-18s and Dr. Cathy Olkin, an experienced SwRI researcher. On these flights, the SwRI principal investigators will perform research using biomedical, microgravity, and astronomy imaging experiments conceived and prepared for flight at SwRI. SwRI has an option to purchase three additional flights at any time, providing more value for the money spent and greater flexibility for experimental research.

"These are exciting times for the suborbital research field," said Dr. Stern. "XCOR and SwRI are blazing new trails with this engagement and setting the stage for others to follow with their experiments."

The capabilities of the Lynx, in particular its responsiveness and low cost of operation provide SwRI and other clients with an unprecedented ability for quick turnaround of key experiments or precious and sensitive samples. Lynx operations will allow customer experiments to go from a runway-side storage facility to the vehicle, then fly to space on a customized flight trajectory and back to an airport-side laboratory in under 30 minutes.  The Lynx offers a level of sample security and assurance not found in other suborbital systems today, while the cost of a Lynx operation is an order of magnitude less than traditional systems.

The Lynx suborbital vehicle is also a robust data collection system with four distinct payload carrying opportunities as either primary or secondary payloads, with locations within the pressurized Lynx cabin or externally exposed to the vacuum of space and the thin air of the upper atmosphere.  Payload mass can range from under 1 kg to over 650 kg.

"SwRI is a recognized leader in the field," said Jeff Greason, XCOR Chief Executive Officer. "They are one of the best research firms in the world for space science and engineering, and their researchers have a phenomenal ability to explore innovative concepts. I look forward to the pioneering work this partnership will achieve."

XCOR Aerospace is a California corporation located in Mojave, . The company is in the business of developing and producing safe, reliable and reusable rocket powered vehicles, propulsion systems, advanced non-flammable composites and other enabling technologies. XCOR is working with aerospace prime contractors and government customers on major propulsion systems, and concurrently building the Lynx, a piloted, two-seat, fully reusable, liquid rocket powered vehicle that takes off and lands horizontally, and serves three primary missions: nano-satellite launch, research & scientific missions, and private spaceflight.  The Lynx production models (designated Lynx Mark II) are designed to be robust, multi-mission commercial vehicles capable of flying to 100+ km in altitude up to four times per day and are being offered on a wet lease basis.  (www.xcor.com).