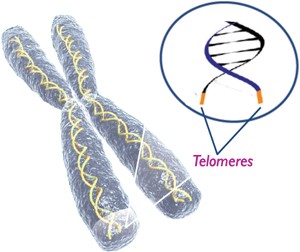 The devil continues to be in the details and this is early days in terms of understanding natural death.  Here we are seeing our understanding somewhat improve, at least in terms of what is happening to telomeres.

The take home so far is that failing telomeres trigger changes elsewhere that lead to a swift decline that coincides very well with observation.  The arbitrary nature of cell changes lead to the suspicion that life extension on the cellular basis may very well be a practical option available to us.

One needs to answer the question of why now?

Harvard finds the core pathway of aging is malfunctioning telomeres

FEBRUARY 14, 2011
Scientists at the Harvard-affiliated Dana-Farber Cancer Institute say they have identified the root molecular cause of a variety of ills brought on by advanced age, including waning energy, failure of the heart and other organs, and metabolic disorders such as diabetes. The scientists found that the basic cause of age-related health decline is malfunctioning telomeres — the end caps on cells’ chromosomes that protect them against DNA damage. As cells reach their predetermined limit of times that they can divide, the telomeres become shortened and frayed, making the chromosomal ends vulnerable to increased rates of unrepaired DNA damage.


UPDATE Aubrey de Grey (of SENS) opinion - It's not a very important paper. The presence of short telomeres makes cells unhappy, and they respond by changing their behaviour in various ways, including depression of mitochondrial activity. That tells us nothing at all about what happens in the absence of short telomeres, which is what we need to know for normal aging.


NBF analogy based on Aubrey comment - having no oil in your car causes parts to wear out faster but just maintaining oil levels is not sufficient to keep your car running for hundreds of years.

Telomere dysfunction activates p53-mediated cellular growth arrest, senescence and apoptosis to drive progressive atrophy and functional decline in high-turnover tissues. The broader adverse impact of telomere dysfunction across many tissues including more quiescent systems prompted transcriptomic network analyses to identify common mechanisms operative in haematopoietic stem cells, heart and liver. These unbiased studies revealed profound repression of peroxisome proliferator-activated receptor gamma, coactivator 1 alpha and beta (PGC-1α and PGC-1β, also known as Ppargc1a and Ppargc1b, respectively) and the downstream network in mice null for either telomerase reverse transcriptase (Tert) or telomerase RNA component (Terc) genes. Consistent with PGCs as master regulators of mitochondrial physiology and metabolism, telomere dysfunction is associated with impaired mitochondrial biogenesis and function, decreased gluconeogenesis, cardiomyopathy, and increased reactive oxygen species. In the setting of telomere dysfunction, enforced Tert or PGC-1α expression or germline deletion of p53 (also known as Trp53) substantially restores PGC network expression, mitochondrial respiration, cardiac function and gluconeogenesis. We demonstrate that telomere dysfunction activates p53 which in turn binds and represses PGC-1α and PGC-1β promoters, thereby forging a direct link between telomere and mitochondrial biology. We propose that this telomere–p53–PGC axis contributes to organ and metabolic failure and to diminishing organismal fitness in the setting of telomere dysfunction
Faced with this increasing reservoir of injured DNA, cells activate a gene, p53, that sounds an alarm and shuts down the cells’ normal growth and division cycle, ordering them to rest until the damage can be repaired or, if not, to self-destruct.


Scientists previously had blamed this emergency shutdown and cell death for age-related deterioration of organs whose cells divide rapidly and are rejuvenated by reserves of adult stem cells. Such tissues include skin, intestinal lining, and blood cells, among others, which generate trillions of new cells each day of life.


However, left unanswered is how cells with less cell division, such as the heart or the liver, sustain equivalent levels of aging. The scientists felt if they could solve this mystery, they might gain new insights into how DNA damage could lead to age-related decline across all organs.


The new findings demonstrate that the telomere dysfunction and activation of p53 also trigger a wave of cellular and tissue degeneration that links telomeres to well-known mechanisms of aging that are not simply related to rapid growth and division. In other words, telomere dysfunction is not just one culprit in the declining health of advanced age. It’s the kingpin, according to DePinho and his colleagues.


DePinho published a study in Nature in January 2011 that demonstrated it was possible to reverse the symptoms of extreme aging in mice by increasing their levels of telomerase, the enzyme that maintains the health of the telomeres.


In this new, larger role, the telomere dysfunction also sets off an array of reactions leading to diminished health and longevity. For example, muscles suffer a loss of mitochondria, a cell’s chemical power plant, causing waning vitality and failure of the heart and other organs. Risks of metabolic disorders such as diabetes are increased.


In addition, the process weakens the body’s antioxidant defenses against the damaging molecules known as reactive oxygen species, or “free radicals,” that accumulate with age and exposure to stress. Until now, some researchers had labeled the decline in mitochondria or the buildup of free radicals as the primary causes of age-related ills.
The new work integrates these seemingly disparate mechanisms into one unified theory of aging.

Telomere dysfunction causes this wave of metabolic and organ failure, the scientists found, because when the p53 gene is activated, it represses the functions of two master regulators of metabolism, PGC1-alpha and PGC1-beta. This dialing down of the regulators diminishes metabolic processes needed to provide energy and resist stress. In the mouse experiments, the scientists showed that “knocking out” p53 in mice released the brakes on PGC1-alpha and PGC1-beta.


“This is the first study that directly links telomere dysfunction to regulators of the mitochondria and antioxidant defense via p53,” DePinho said. “The discovery of this new pathway of aging integrates a lot of different ideas people have had and gives us a better understanding of the aging process.”


By unifying several major pathways of aging under the umbrella of telomere dysfunction, he said, the findings may yield new targets for therapies. The discoveries also may underlie the relatively sudden and rapid failure of the body leading to the end of life.


“Because telomere dysfunction weakens defenses against damage by free radicals, or reactive oxygen species,” DePinho said, “we think this exposes telomeres to an accelerated rate of damage which cannot be repaired and thereby results in even more organ deterioration. In effect, it sets in motion a death spiral.”