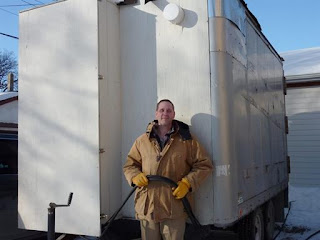 This is another item on the developing bed bug battle.  The take home here is that a sustained treatment at 50C will kill off the problem

It is not a great plan but it certainly does the job but is difficult to put into practice.

A better solution is to seal off the building and bring the ozone level up to 10 parts per million or so. Unfortunately this is still only available in Vancouver and Seattle.  The process has to be professionally applied.  Warning – avoid promoters selling plasma arc ozone producers – they produce mostly nitric acid which is what you actually smell.

With ozone nothing will survive except your friendly strange breathing cockroach.

The bed bug is rapidly recovering because we do not allow the effective pesticides that ended their past pervasiveness. Somewhere we have to establish effective public policy for this.  On and off is turning out to be stupid.

Wieler, stands beside a trailer he converted into a bedbug cooker, in this recent …

WINNIPEG - A Winnipeg landlord who had bedbugs in his suites has designed and built his own solution for ridding the pests, he literally bakes them to death.

Leon Wieler took an old equipment trailer, installed heaters and fans, and now heats the inside to a temperature that's fatal to bedbugs.

"It was a matter of necessity. I had my first case of bedbugs about four years ago. I'm a very hands-on landlord. I do my own repairs, that's what I do. And the response I was getting from my exterminators wasn't adequate," explains Wieler, who owns a 36-suite building.

"So I did my research and I became an exterminator and I built my bedbug oven, because the research has found that heat is the Achilles heel of the bedbug."

Wieler says he learned extermination himself, but needed a way to treat furniture, mattresses, TVs and computers.

So Wieler tried putting various items of furnishings in the trailer and eventually discovered that bedbugs die when the temperature hits 50 C.

It sounds simple, but Wieler says it took nearly four months of experiments to get the cooker right. Too high a temperature in one spot can start a fire or melt something. Too low in another spot might mean some bedbugs survive.

He also had to figure out how long it would take the heat to penetrate various types of furniture.
"If you're just heating mattresses and couches, you can make the temperature go very high with no difficulties. If you're wanting to treat TVs and computers and VCRs, you have to concentrate on a very, very high air flow and a minimum of heat," Wieler says.

For mattresses, he turns the temperature up to over 70 C and cooks them for about four hours. He bakes electronics at a lower temperature for up to 20 hours.
Cities across the continent have seen a surge in bedbugs, partly because of an increase in international travel but also because of a ban on highly toxic pesticides such as DDT and a growing bedbug resistance to lower-strength insecticides.

Earlier this month, Manitoba Premier Greg Selinger announced his government is developing a strategy to fight bedbugs that will include marshalling each municipality in the fight and co-ordinating techniques to exterminate them to stop the infestation.

recently rolled out a $5 million plan to educate and fund public health agencies across the province to help fight bedbugs.

Wieler says his cooker is only one component of his bedbug control strategy. He says he still must make sure tenants are careful not to reintroduce bedbugs to his building, but he says the cooker has helped keep the apartments bedbug-free.

The cooker wasn't cheap. The heaters are industrial quality, and Wieler says he spent about $14,000 just for materials.

Also, about one per cent of items don't survive the trailer treatment. Unusual types of plastic are usually the problem.

"We once had the plastic turntable ring of a microwave warp. So the owner put a plate on it and put it in his toaster oven and flatten out and it was fixed," Wieler says.

"Some kids had Lego that didn't appear to be damaged, but the fit wasn't as tight as it used to be," he adds.

you think you've contracted bed bugs, better call an exterminator: bed bugs are notoriously difficult to get rid of on your own.
exterminating bedbugs
bedbug pest control