Using Wind to Stabilize the Grid 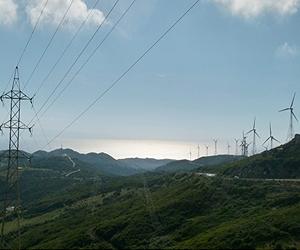 It appears the idea is to use small local energy sources such as windmills to allow islands to be cut out of the grid to prevent a failure mode from propagating further.  I do not see how that could work but we may presume there is a good reason for it, if only because it maintains a local base load that allows time to side step the problem.

In the event, this is more toward integrating alternative power into the grid in the best way possible.

If we have learned anything it is that diverse distributed energy sources hugely increase the robustness of the grid itself as was so recently shown in Japan were the wind is presently providing some system reassurance.

The wind can potentially provide abundant renewable energy that could power the disconnected portion of the network. For data collecting and testing purposes, the researchers plan to use the university's wind turbine north of campus, near the intersection of Denison and Kimball avenues, as well as four other wind turbines installed at the Riley County Public Works Facility.

One of ' most abundant natural resources may hold the key to preventing major power outages. A team of engineers is researching ways to use wind and other distributed energy sources to avoid cascading failures.

Sakshi Pahwa, doctoral student in electrical and computer engineering, India, explored the topic for her recently completed master's project, "Distributed Sources and Islanding to Mitigate Cascading Failures in Power Grid Networks." The project was a winner at the recent Capitol Graduate Research in Topeka.

The research looks at using distributed energy sources to avoid cascading failures in power grids. A cascading failure occurs when an interconnected part of a power system fails and then triggers successive parts to fail - like the one that happened in the Northeast Blackout of 2003, a power outage that affected 55 million people in the and .

To prevent cascading failures researchers are investigating a technique called islanding, which works to minimize the impact of a power system fault to a small area. Islanding prevents this fault from affecting other areas and stops further disturbances in the network.

"We used a network partitioning algorithm, and then depending on where the fault is I can disconnect that portion of the network," Pahwa said. "That disconnected portion can then be powered using renewable or distributed energy sources, such as wind turbines or solar panels, and the remaining parts are still being powered by conventional sources."

The wind can potentially provide abundant renewable energy that could power the disconnected portion of the network. For data collecting and testing purposes, the researchers plan to use the university's wind turbine north of campus, near the intersection of Denison and Kimball avenues, as well as four other wind turbines installed at the Riley County Public Works Facility.

The university turbine was installed for Wind for Schools, a project led by Miller, director of the . The Riley County wind turbines were installed for the Resourceful Kansas project, a cooperative effort between Miller, Scoglio, Riley County and the Kansas City-based consulting firm GBA, and funded by the U.S. Department of Energy.

"We need to set up power systems that are reliable and stable so that when that wind is blowing, we can use that power, but when the wind isn't blowing, there are also stable systems," Schulz said. "That's what this project is about - modeling the network so we understand the different aspects for when there are changes, when the wind blows, when it doesn't and how that affects the power system."

Scoglio and Pahwa started the project when Pahwa was a master's student. As they began studying complex network systems, they turned to Schulz, a power grid expert who has done previous work with islanding. They also collaborated with power systems expert Anil Pahwa, professor of electrical and computer engineering, and Shelli Starrett, associate professor of electrical and computer engineering.

"With the proper design and the right intelligence, some of the problems related to power failures can be prevented," Scoglio said. "We need to make sure that the communication network will monitor the network and detect the problem and will implement the reaction securely to implement these solutions."

Sakshi Pahwa's research aims to not only study the problem from a theoretical aspect, but also provide practical solutions to real-world problems. It also fits in with the Renewable Energy Standards Act, which was signed in 2009 and states that major Kansas utilities should be able to generate about 10 percent of their power from renewable sources by 2011 and 20 percent by 2020.

"This project benefits the state because it reduces carbon emissions through renewable energy," Pahwa said. "It is a good opportunity to create jobs, and renewable energy incorporation is also a support to the conventional sources so we don't need to import fuels from other countries. It helps the economy as well."

"This research is a benefit for Kansas and the whole nation because I think that innovation, coming from research and support from companies such as those that are part of the power affiliates, can really bring the country back to a better economic situation," Scoglio said. "Innovation comes with jobs and can really improve the whole nation."