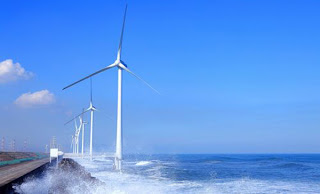 A startling outcome of the great Japanese earthquake is the public relations collapse of nuclear energy and the mirrored public relations coup won by wind energy.  Wind energy was totally unaffected even in small detail and can now operate full out to step into the present production shortfall.

It is also likely to materially expand to make up the production shortfall brought on by the forced closure of , simply because it can do so quickly.  That is always beyond the capability of large power plants whether nuclear, coal, or even geothermal.

The take home lesson from is that large central power plants are terribly vulnerable to a single event.

We have also learned that facilities not designed to withstand a once in a thousand year event has a 40/1000 chance of disaster over a forty year lifespan.  A .04 chance is significantly more serious and likely that a .001 chance.  That tsunami was predictable as are similar tsunamis anywhere along the ring of fire.

That is was not properly designed for is another example of expediency overriding good engineering sense by decision makers who knew they would likely never be around to answer to it all. 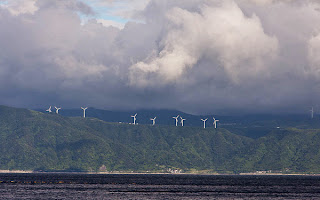 As the world collectively holds its breath to see how the crisis plays out (the quote of the day has got to be: "The worst-case scenario doesn't bear mentioning and the best-case scenario keeps getting worse...") there's a positive story which is not yet being reported.

Despite assertions by its detractors that wind energy would not survive an earthquake or tsunami the Japanese wind industry is still functioning and helping to keep the lights on during the Fuksuhima crisis.
Wind Farm in by rjzii

Colleagues and I have been directly corresponding with Yoshinori Ueda leader of the International Committee of the Japan Wind Power Association & Japan Wind Energy Association, and according to Ueda there has been no wind facility damage reported by any association members, from either the earthquake or the tsunami. Even the Kamisu semi-offshore wind farm, located about 300km from the epicenter of the quake, survived. Its anti-earthquake "battle proof design" came through with flying colors.

Mr. Ueda confirms that most Japanese wind turbines are fully operational. Indeed, he says that electric companies have asked wind farm owners to step up operations as much as possible in order to make up for shortages in the eastern part of the country:

Eurus Energy says that 174.9MW with eight wind farms (64% of their total capacity with 11 wind farms in eastern part of ) are in operation now. The residual three wind farms (Kamaishi 42.9MW, Takinekoshirai 46MW, Satomi 10.02MW) are stopped due to the grid failure caused by the earthquake and Tsunami. Satomi is to re-start operations in a few days. Kamaishi is notorious for tsunami disaster, but this wind farm is safe because it is locate in the mountains about 900m high from sea level.

The largest wind farm operator in Japan, Eurus Energy with about 22% of all wind turbines in Japan, is a subsidiary of Tokyo Electric Company (TEPCO) which operates the Fukushima nuclear facility. Right now, it is likely the company is very happy about its diversified portfolio:

While shares in the stock market have fallen during the crisis, the stock price of Japan Wind Development Co. Ltd. has risen from 31,500 yen on 11 March to 47,800 yen on 16 March.

’s wind farms save its ass while nuclear plants founder

Wind turbine in Yokohama, JapanPhoto: shibuya246If Japan's wind turbines were to get a new theme song, it would be Wagner's "Ride of the Valkyries", and it would ring out from the hills upon which they stand triumphantly, unscathed by the the country's earthquake/tsunami double whammy, lifting their skinny, still-turning blades like antennas to heaven.

While 's water-dependent nuclear power plants suck and wheeze and spew radioactive steam, "there has been no wind facility damage reported by any [ Wind Energy Association] members, from either the earthquake or the tsunami," says association head Yoshinori Ueda.

Even the country's totally badass Kamisu offshore wind farm, with its giant 2 MW turbines with blades big as the wings on a jumbo jet, and only 186 miles from the epicenter of the largest quake ever recorded in Japan, survived without a hiccup thanks to its "battle proof design." As a result, the nation's electric companies have asked all of its wind farms to increase power production to maximum, in order to make up for the shortfalls brought about by the failure of certain other aging, non-resilient 20th-century technologies.

Unlike conventional power plants, wind turbines don't have to be situated close to sources of water (always a liability), and their simplicity means fewer potential points of failure.

Bonus: when they break down, no one has to give their life to keep them from turning one of the world's most densely populated countries into a radioactive hellscape!