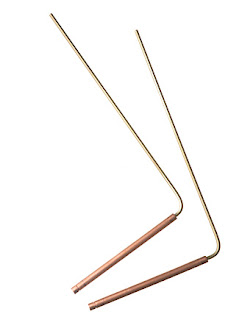 It is very easy for the modern scholar, or student of science to dismiss dowsing out of hand.  I certainly did when I was a lot younger and knew far too much.

The answer to all that is to recall that the only major field that acts at a distance that we are able to easily sense is the electromagnetic field.  Worse, we cannot sense gravity.

Having thought somewhat more clearly about the subject, I am able to make a startling statement.  The best way to sense gravity is with a long rod and having two rods at right angles would be better and having two such contrived devices for comparison would be even better.  Sounds like dowsing to me.

On top of that, wet soil will establish continuity in a porous mass that will develop a stronger gravitational signature.  Thus using rods or gravity sensors to detect the stronger gravitational signature of saturated soil close by is a perfectly good idea and also informs us how to design a useful gravity sensing device.  We really need one of those and this sounds like something any teenager can make up.

The first trick is to understand that you are sensing local gravity effects.  Water mains will provide a good test sample.

Thus we actually have some exciting and predictive science to explore.  Send me reports at arclein@gmail.com if you pursue this.

It's an ancient art used for finding water, buried treasure and even missing people.

Here's what it is, how it works, the methods and tools - and how you can learn to dowse

A man walking through an empty field holding a Y-shaped stick before him in both hands can be a peculiar sight. What is he doing? Either he's leading some bizarre, solitary parade... or he's dowsing.

Dowsing, in general terms, is the art of finding hidden things. Usually, this is accomplished with the aid of a dowsing stick, rods or a pendulum. Also known as divining, water witching, doodlebugging and other names, dowsing is an ancient practice whose origins are lost in long-forgotten history. However, it is thought to date back at least 8,000 years. Wall murals, estimated to be about 8,000 years old, discovered in the of depict tribesmen surrounding a man with a forked stick, possibly dowsing for water.

Artwork from ancient and seem to show people using forked tools in what might have been dowsing activities. Dowsing may have been mentioned in the Bible, although not by name, when Moses and Aaron used a "rod" to locate water. The first unambiguous written accounts of dowsing come from the Middle Ages when dowsers in used it to help find coal deposits. During the 15th and 16th centuries, dowsers were often denounced as practitioners of evil. Martin Luther said dowsing was "the work of devil" (and hence the term "water witching").

In more modern times, dowsing has been used to find water for wells, mineral deposits, oil, buried treasure, archaeological artifacts - even missing people. How the dowsing technique was first discovered is unknown, yet those who practice it are unwavering in their affirmations that it does work. (For more information on the history of dowsing, see Dowsing: Ancient History.)

HOW DOES DOWSING WORK?

The quick answer is that no one really knows - not even experienced dowsers. Some theorize there is a psychic connection established between the dowser and the sought object. All things, living and inanimate, the theory suggests, possess an energy force. The dowser, by concentrating on the hidden object, is somehow able to tune in to the energy force or "vibration" of the object which, in turn, forces the dowsing rod or stick to move. The dowsing tool may act as a kind of amplifier or antenna for tuning into the energy.

Skeptics, of course, say that dowsing doesn't work at all. Dowsers who seem to have a track record for success, they contend, are either lucky or they have good instincts or trained knowledge for where water, minerals and the like can be found. For believer or skeptic, there's no definitive proof either way.

Albert Einstein, however, was convinced of the authenticity of dowsing. He said, "I know very well that many scientists consider dowsing as they do astrology, as a type of ancient superstition. According to my conviction this is, however, unjustified. The dowsing rod is a simple instrument which shows the reaction of the human nervous system to certain factors which are unknown to us at this time."

Dowers say that anyone can do it. Like most psychic abilities, it may be a latent power that all humans possess. And, like any other ability, the average person might become better at it with practice. However, there are some people whose dowsing powers are extraordinary:

Emmy Kittemann, daughter of a dowser, was one of the most acclaimed dowsers in . In her most famous case, she correctly dowsed the location of a mineralized spring for the . All previous drillings found only water with heavy sulfur content. Yet Kitteman accurately predicted the depth at which the water would be found as well as its iodine-rich content.

In 17th century France, Jacques Aymar Vernay, a stonemason by trade, used his dowsing talents to successfully track criminals. His dowsing rod, on more than one occasion, led authorities to the whereabouts of murderers.

In December, 1992, a Mr. and Mrs. Anders and Berith Lindgren were hunting with their friends when their dog ran off and disappeared. An extensive search proved fruitless. A few days later they sought the help of dowser Leif Andersson. His dowsing techniques led the hunters to a small lake where they indeed found the body of the dog, where it had apparently fallen through the thin ice and died.

Dowsing is one of the few psychic talents that can be applied directly for profitable result or as a business. Some well-known names from history practiced dowsing, including Leonardo De Vinci, Robert Boyle (considered the father of modern chemistry), Charles Richet (a Nobel Prize winner), General Rommel of the German Army, and General George S. Patton. "General Patton," writes Don Nolan in his article A Brief History of Dowsing, "had a complete willow tree flown to so that a dowser could use branches from it to find water to replace the wells the German Army had blown up. The British army used dowsers on the to remove mines."

Professor Hans Dieter Betz (professor of physics, university) headed a team of scientists that investigated the ability of dowsers to find underground drinkable supplies, taking them to 10 different countries and, on the advice of dowers, sank some 2,000 wells with a very high success rate. In , where the geological conditions are said to be difficult, some 691 wells were drilled for, based on the advice of dowsers, with a 96% success rate. Geohydrologists given the same task took two months to evaluate a site where a dowser would complete his survey in minutes. The geohydrologists had a 21% success rate, as a result of which the German government has sponsored 100 dowers to work in the arid zones of to find drinkable water.

There are several types or methods of dowsing:

Forked stick. The most traditional method uses a small Y-shaped tree branch (most often from a willow). The dowser holds the branch parallel to the ground by the top of the Y shape, then walks over the area to be probed. When the dowser passes over the sought object, the end of the branch is drawn down, pointing to the spot at which the object can be found.

Rods. An alternate method uses two L-shaped metal rods, one held in each hand parallel to the ground and parallel to each other. In this case, when the dowser passes over the sought object, the rods either swing apart or cross each other. You can easily make dowsing rods from wire coat hangers.

Map dowsing. Some dowsers don't even have to visit the location to be dowsed. For them, a map of the area is sufficient over which they hold a pendulum. They know they have located the target area when the pendulum begins to move in a circle or back and forth.

Y-rods, L-rods, pendulums and other dowsing equipment can be purchased from
The American Society of Dowsers.

How To Practice Dowsing

It's easy to try dowsing yourself. Here are some steps for a dowsing test:

Make or purchase the dowsing tool with which you will be most comfortable.

Ask a friend to bury an object (try a metal object or small bottle of water) somewhere in your yard, just a few inches below the surface. Be sure your friend is careful to conceal the burial spot so that it is not at all obvious where they have dug.
Before starting, mentally ask your dowsing tool to indicate to you when you are passing over the hidden object. (Be sure to consult some of the sources listed in this article for the proper way to hold the dowsing tool.)

Start walking. You can either take a methodical approach, walking in a defined pattern up and down the yard, or you can walk randomly, following your instincts.

Walk slowly, concentrating on the object and trying to remain open and sensitive to the movements of the dowsing tool.

When your dowsing tool reacts and indicates a specific spot, stop and see if you have succeeded. If not, try again.

If at first you don't succeed, try a different dowsing tool or a different type of target.

Try it at different times of day and in different frames of mind; these may all affect the outcome.

Keep a record of your attempts and keep at it. You might find that you have a strong ability for dowsing.

Let me know how well you dowsed.