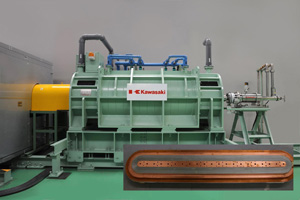 Here we see a marine motor prototype that uses superconducting technology.  Slowly but surely each component of a superconducting energy system is now been assembled.  We start with the big machines as de did with stem and we did with electrical and with fuel based systems.  They all take years of incremental design improvement.

Combining this with generators and the new thin superconducting cables and we have a technology package that can be installed industrially in plants and ships.

The age of superconductivity is almost here and will soon dominate new builds. 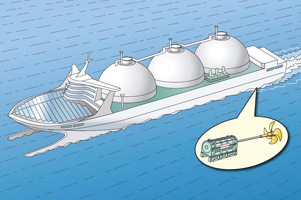 Tokyo, November 1, 2010 — Kawasaki Heavy Industries, Ltd. announced today that its prototype superconducting motor has broken a new record. The motor achieved ’s highest power output of 450 kW in a test conducted at Kawasaki’s Akashi Technical Institute in , . This achievement marks yet another breakthrough in ’s research and development into space and energy-saving superconducting motors for large vessel propulsion systems as well as large-scale industrial drive systems.

Superconductivity is a unique phenomenon that has been observed in specific materials. When these materials are cooled to ultralow temperatures, they demonstrate absolutely no electrical resistance. If applied to various devices and systems, this phenomenon can significantly boost efficiency.

Superconducting coils incorporated into the design of the prototype motor’s rotor are cooled with cryogenic gas. Eliminating the need for an iron core to generate a strong magnetic field, these coils have enabled to build a motor that's half the size of conventional models. This most recent test was conducted on a prototype motor with a designed output of 1 MW. When two out of six coils were installed on each pole, the motor’s power output reached 450 kW with an outstanding efficiency rate* of 98% to top the Japanese record. The test results suggest that motor output will reach 1 MW when all coils are installed.

*Motor efficiency is the ratio of mechanical energy output to electrical energy input.

While ships are now starting to employ electric propulsion systems designed to reduce environmental load and diversify energy sources, the maritime industry is still looking for new ways to boost fuel efficiency as well as cut emissions in order to combat climate change even further. It’s against this backdrop that superconducting technology has fallen under the spotlight as a sustainable solution to the world’s mounting energy and environmental problems.

A vessel employing an electric propulsion system with a superconducting motor will consume far less electricity than an ordinary diesel engine ship. What’s more, the motor’s compact size makes room for optimal hull designs that will reduce wave resistance. Another benefit is minimal energy loss since the motor drives the ship’s propellers directly without the use of speed reducers. Altogether these advantages of superconducting technology cut fuel consumption by about 20%.

This year, began development of a 3 MW commercial model for use with various types of domestic cargo vessels that will boast the world’s highest efficiency and smallest footprint. is moving full speed ahead to put superconducting motors to use on medium and large-sized merchant ships as well as industrial power generators and drive systems for highly efficient products designed to shrink our carbon footprint. Superconducting motors for liquefied natural gas carriers as well as tomorrow’s liquefied hydrogen carriers are making the most of cold energy to bring propulsion system efficiency to new heights.

Kawasaki has been developing a superconducting motor under a project commissioned (and currently subsidized) by the New Energy and Industrial Technology Development Organization (NEDO) since September 2007 in cooperation with the Tokyo University of Marine Science and Technology, the National Maritime Research Institute, Japan Superconductivity Organization, and Sumitomo Electric Industries, Ltd.

How can I get rid of pool deck sealer that was sprayed into swimming pool water?

Dog peed on brown patio tiles, now they have white streaks, no matter how much I clean, it wont go away, HELP! Marine flooring