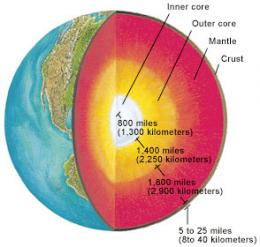 This is a brave effort, but reaching through five miles of rock is presently almost normal drilling practice, or at least the first four miles certainly is.  Certainly a lot of important science will be determined and if the effort is duplicated in the and several other locations, we may have surety in our knowledge of the oceanic crust.

The temperature handled is the real limit here, but 600 F is a long way form the information I would like to see.

I wonder if it may be possible to push a graphite head bit through able to handle the heat behind a hydraulic pressure head.  Fluid recovery may suffice to characterize the material been passed through.  How about titanium with a graphene layer?  My point is that we have not run out of tricks and it is worth the effort from a scientific and engineering perspective.

The interesting question is how far down on the sea bed we can really drill.  We may be about to find out.

(PhysOrg.com) -- In what can only be described as a mammoth undertaking, scientists, led by British co-chiefs, Dr Damon Teagle of the National Oceanography Centre in Southampton, England and Dr Benoit Ildefonse from Montpellier University in France, have announced jointly in an article in Nature that they intend to drill a hole through the Earth’s crust and into the mantle; a feat never before accomplished, much less seriously attempted.

The Earth’s mantle is the part of the planet that lies between the crust and the iron ball at its center, and to reach it, would require drilling down from a position in the ocean, because the crust is much thinner there. Even still, it would mean drilling through five miles of solid rock. And if that doesn’t sound hard enough, temperatures increase the farther down you go, and could reach as high as 570 degrees Fahrenheit; high enough to render useless most modern drill bits. Last but not least is the problem of atmospheric pressure, which increases the deeper you go, to somewhere in the neighborhood of 4 million pounds per square foot near the mantle. That last one may not seem like much of a problem, but with exploratory drilling, it becomes a problem rather quickly when you remember that it’s not just a hole they plan to dig, but a hole that can be used to extract samples from very far below.

To retrieve a sample, the drillers would have to rely on drills without a riser (drills that use double pipes for venting gases) which would mean pumping seawater down into the hole through the drill pipe with sufficient pressure to force whatever is being dug back up to the surface so that it can be examined.

This would not be the first time that a sample of the mantle would be recovered however, as volcanoes and such have been forcing under-crust material to the surface for eons; it would be the first time that a sample was found though that hasn’t been tainted by the process that brought it up to us, and that scientists say, is worth whatever the cost might add up to over time as the project carries on through years of laborious drilling.

The pair plan to begin searching for a suitable site somewhere in the Pacific this spring, but don’t expect the technology, nor the funding to allow them to start drilling till perhaps 2018.
© 2010 PhysOrg.com
Posted by arclein at 12:01 AM